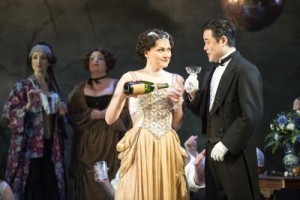 La Traviata returns to the Lowry for a second Opera North season, and it is clear from the packed theatre that Verdi’s dramatic opera is as popular as ever. Indeed, it was recently voted the most popular of all operas by the Operabase website. Not bad for a show that was considered a flop after its first production in 1853.

Opera North’s productions are often as visually lavish as they are musically dramatic. In contrast, this production’s design feels very sparse. The scenery is minimalist, yet effective, and there is an interesting choice of microscopic filming to portray the progression of tuberculosis through Violetta’s body. That this Parisian courtesan who lives for pleasure is to die young is not the central tragedy, however. Rather it is that she is forced to leave her one true love, Alfredo, by his interfering father, who believes her unsavoury past is bringing shame to the rest of the family. The couple is only to be reunited briefly on her deathbed.

I didn’t see the November performances, but my colleagues felt that there was a distinct lack of passion between the two lovers. This appears to have been somewhat heated up this time around. Alfredo is sung again by Ji-Min Park, who I like as a performer and singer. He sings powerfully and captures the heartbreak of a jilted lover. This time Anna Jeruc-Kopec ably takes on Violetta, and brings enough fire to the role for both of them.

If nothing else, the music itself is enough to ensure an enjoyable and emotional evening. But, with the passion back in place, this is an absorbing production that will ensure the opera’s continued popularity.