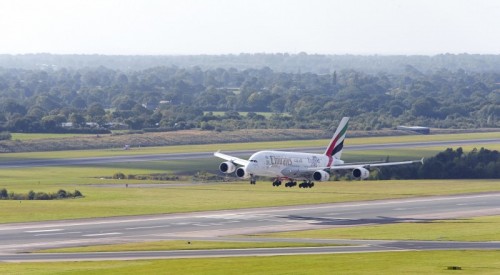 ‘Happy 80th Birthday,’ I whisper as my flight touches down at Manchester Airport. I knew bringing a cake with candles wouldn’t be a good idea, but I can’t let the occasion go without a nod to the UK’s third biggest gateway, which has certainly played a huge part of my life.

Like millions of others, for me the airport has been the start of many adventures. In the early days I would be carrying the case, then came the ‘two-wheeler’ and today my contents sail through on four wheels. I have been fortunate over the years to broadcast a whole host of radio programmes for BBC from the airport, both airside and land side and have presented many a Children in Need night on a huge stage under those unforgettable chandeliers! I even been lucky enough to sit next to a pilot and interview him whilst at 33,000 feet.

Manchester was the first city in Great Britain to establish a municipal aerodrome when an Air Ministry licence was granted to the Corporation on 22 April 1929. In January 1934, an airline’s senior pilot claimed that the existing Barton site for Manchester was unsuitable and by July 1934 the City Council had chosen Ringway, as Manchester Airport used to be known, as a new home.

Called “Time Flies,” it was released in April to celebrate the airport’s 80th birthday.
The film tells the story of Manchester’s evolution from a single wooden hut in 1938 to the UK’s third largest airport and a key driver of global trade and tourism for the whole of the North.

It features poignant memories from passengers, businesses and airport workers past and present, with the words used to narrate the footage penned by the famous Mancunian wordsmith.

Andrew Cowan, CEO of Manchester Airport, says: “Looking back over the past 80 years has made us appreciate more than ever the important role Manchester Airport has played in the lives of so many people across the North.

“We have unearthed so many stories, from people’s first time on board an aircraft, special holidays and family reunions, to husbands meeting their wives and rock stars passing through our terminals.”

Among those featuring in Time Flies is Phillip Mallinder, of Clifton, Salford, who was born exactly one month before Manchester Airport opened in 1938. He is one of the millions of people for whom air travel wasn’t possible more than 40 years ago and is seen flicking through the holiday photos from his first trip abroad in the early 1980s.

The future generation also makes the cut, as pupils from nearby Ringway Primary School feature. The class shown in the video are seen drawing and designing a bespoke 80th birthday card for the airport to use. The pupils shown from Ringway Primary school make up part of 15,000 students the airport’s Community Relations team work with every year on a host of aviation themed projects.

From the airport itself, Special Projects Director Tony Lavan is seen clutching one of his old passport photographs. He joined the airport more than 40 years ago as an engineering apprentice.

And husband and wife Gary and Janet Brown also feature. They met while working at the airport and are both now terminal duty managers.

The collaboration with Tony Walsh is just one of the activities as part of Manchester Airport’s 80th celebrations. This includes planting 80 oak trees (the official gift for an 80th), opening the archives, tea parties for the local community and working with KLM – my personal favourite airline – which had the first commercial flight from Manchester.

Written by Lorraine Worsley-Carter
Add comment
Hats off to Fuerteventura!
FacebookTwitterPinterestWhatsApp
My year of champagne