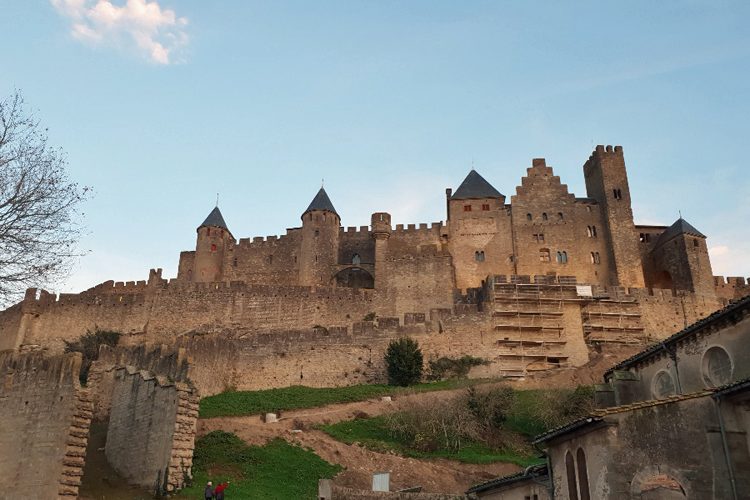 Lorraine Worsley-Carter welcomes 2019, with a break in the beautiful medieval city of Carcassonne, south west France.

The earliest traces of Carcassonne go back to the 6th Century B.C. Carcassonne stands on both sides of the River Aude. It is the capital of the Aude department, in the region of L’occitane (former Languedoc- Roussillon) in south western France, just around 90 kilometres southeast of Toulouse. The Canal Midi ambles through and the River Aude divides the city into two towns, the Cité and the lower town known locally as the Ville Basse or Bastide St Louis.

The Cité became an UNESCO World Heritage Site in 1997 and has stood for centuries, sometimes proudly, sometimes in defiance, sometimes in ruins and sometimes as now, in splendour. It is the biggest tourist attraction in France and has the finest remains of a medieval city in Europe.

The turrets and ramparts of the Cité and the castle within have provided the backdrop for films such as Robin Prince of Thieves, Les Visiteurs, Le Corniud and reputedly the inspiration for Disney’s Sleeping Beauty and unashamedly the enchanted castle of childhood dreams. Kate Mosse, author of best-selling Languedoc trilogy “Labyrinth”, “Sepulchre” and “Citadel”, set each enthralling story in or around Carcassonne, at an important point in the city’s history – in each one Carcassonne itself has a starring role and has led many readers to the Cité’s gates.

Like most fortresses the Cité has suffered long periods of occupation and ownership, from the Roman Empire, to the Visigoths, the Saracens and the Francs. In the 13th Century Pope Innocent III called a Crusade in the Languedoc region, against a sect of Christians, now known as Cathars. This was called the Albigensian Crusade and Count Simon de Montfort, was one of the leaders. This was the very first time a crusade was led against Christians on European soil. The Cité fell to de Montford in 1209, imprisoning and some say killing the brave and fearless 25-year-old Raymond Roger Trencavel, Viscount of Carcassonne.

Rivalries and tensions between various rulers continued and by the 19th Century the Cité was nothing more than a stone quarry. Fortunately, as in all good fairy stories, a local man, called Jean-Pierre Cros-Mayreveille saved the day together with architect Eugene Viollet-le-Duc they responsible for the fabulous Cité, complete with the turrets today. Turrets loved by some, including me and loathed by purists. Give me a turret on a castle anytime!

Today the only swords swishing around are in the hands of young tourists who have their own fairytale scripts of fighting dragons and rivals along the ancient walkways and on the majestic ramparts of the castle. The Cité is internationally recognised and many millions of tourists visit each year.

Coach tour buses and private mini buses fill the car parks, walkers with their possessions in their back packs and helicopter tours taking to the air. In the summer, huge numbers of tourists arrive at Carcassonne station, walk through the lower town, over the old bridge Pont Vielle, along Rue de Trivalle, straight to the Medieval Cité and return at the end of the day to the railway station. Although this is the area where we love to stay, taking a house on Rue de la Gaffe, I feel sad for the lower town as it appears that few tourists take time to explore it on their schedule filled days.

Personally, like the celebrated 19th Century French author, Standhal, before me, I like to sit by the fountain in the main square, the Place de Canot and watch the world go by. I love market days when fresh produce from the local farmers and co-operatives fill the square and spill around to the spaces outside the Meat and Fish Market. I like to watch the stall holders stand at their market bars and discuss, who knows what, whilst they drink their rose wine with ice! – that was surprising – and greedily wipe up the remains of a little free tapa using bread from the tiniest of plates.

I love to watch the comings and goings of the Saturday Market, held on Place General de Gaulle and wonder where the second-hand clothes sellers procure so many pairs of jeans and coats. My favourite petit dejeuner is taken at La Rotunda near the Canal de Midi where waiters, Eric or Remy provide me with hot coffee, fresh bread, croissant, fresh orange juice, butter, jam and honey for 6.50Eur.

Of course, many people, like ourselves, return time and again and once Carcassonne and its many delights have been discovered there is much to explore. I would say hiring a car is favourable, however there are plenty of tours to be booked if you don’t fancy some of the mountainous drives.

Back to the 12th Century just for a moment, where, the crusaders continued for decades, to seek out the Cathars, the so-called heretics and there are remains of Cathar castles all around this area of Languedoc now known as L’occitane. In many fortresses, the Cather’s held out from their aggressors for as long as possible but were eventually sort out killed after torture or burnt alive on huge bonfires. The legends and the remains of the castles still hold fascination today. There are so many abbeys, castles and chateaux to discover in this region, and one can become blasé, but each one we visited had an allure all of its own.

Obviously following my love of bubbles, a trip to St Hilaire had to happen. The village is just over 15kms out of Carcassonne on the road to Limoux. It is here, in St Hilaire Abbey, in 1531 that the monks invented the world’s first sparkling wine called Blanquette. Legend has it that the recipe was introduced to the Champagne region of France later by a travelling monk known as Don Perignon. For me the taste is totally different from champagne but Blanquette de Limoux is still very palatable and there are many available tours of the cellars of the wine houses all around Limoux but best to book in advance.

Staying three weeks over Christmas and New Year and covering over 3,000 kilometres we were fortunate enough to have roads and hotels mainly to ourselves, although like homing birds returning to Rue de la Gaffe, after our jaunts. I took an instant dislike to Perpignan, sorry Perpignan. I found Montpellier architecturally interesting, like the Triumphal Arch of the 1600’s called the Porte du Peyrou and the Imposing, bi-level arched aqueduct dating to 1766 and currently supplying the city’s fountains; but nothing else, sorry Montpellier.

The drive a little further to Palavas les Flots, however, was a pleasure, especially spotting flamingos in the marsh lands and the chance to dip a hand in the Mediterranean Sea on Boxing Day, was an unexpected delight. Albi was one of our favourite overnight stops with a visit to the Toulouse Lautrec Museum being a must for us and we were not disappointed.

On New Year’s Day we travelled north from Carcassonne, avec le picnic, to the Medieval City of Minerve, renown for the siege it suffered in 1210 as part of the aforesaid merciless crusade. The first glimpse of the City appeared as the car rounded the bend in the small serpentine road and the view, simply breath-taking! Minerve is surrounded by stunning natural scenery and perched on a rocky spur overlooking the gorges of Cesse and Brian rivers, in which the water has carved amazing natural bridges.

Surprisingly, for this first day of a new year, there was one establishment open in the village, and it was a bookshop, it was called Paroli, and as we had come to learn about these mountain village bookshops, it had within its shelves, a cosy café serving coffee and patisserie.

Whilst on the book trail I must mention my absolute favourite mountain village of all. Sadly J K Rowling has already written about enchanted books, magic shops, black cats and secret writings because if she had not done so, and, been so mightily successful, then I would have based a book on Montolieu. Apart from the Museum of Book Arts and Crafts where the visitor can be taken on a discovery through the birth of writing, early book binding and engraving. There are numerous book shops ‘librairies’, many with books spilling onto stalls on the pavements, books and posters from by gone years, books in different languages, books, books books everywhere.

Then cosy cafes where you can browse a book, eat a full meal with wine, be welcomed by a book group who happen to be sitting in a corner near the fire, or have a coffee, choose to buy a piece of cake from a table bursting with macaroons and patisserie. My personal favourite for all of this was The & Co, and because I believe Montolieu is a magical place, I am certain that the black cat that crossed my path did say ‘Hello’ to me!

Saissac is yet another village perched high on a ridge overlooking the Carcasses plain. Whilst the castle is the oldest and one of the largest of the Cathar castles, seat of the lords of Carcassonne and the Trencavels, it is still relatively less well known. Here was our favourite church, making our way down the steep alley ways that led to the castle we noticed the door of the church was open and we had it to ourselves. There was a solitary brass candle stick holding a well-used candle, we found some matches and lit the candle – obviously finding an offertory box for our euro! The light from the candle lit the sculptures of two angels that guard the simple altar.

Despite visiting other imposing castles such as the four castles of Lastours, once again perched on a rocky spur, the castle of Villerouge-Termenes, in the higher reaches of the Corbieres Massif and home to ‘last Cathar’ Guilhem Belibaste, the stately Montsegur castle built high above the mountain village of the same name, the cascades of Cubsevies by Roqufrere and the abbeys of Fontfroide and Caunes-Minervois, there are many more places just waiting to be explored and we intend to be back to do so.

But, why have I called this piece of writing ‘Castles in the air and castles in the sand’? Well, amidst all the history, the legends, the imposing medieval castles and the knights of old…just five kilometres out of Carcassonne is La Cavayere Lake, a magnificent reservoir where there is ample opportunity to take part in water sports of all kinds and, on a sunny December day between Christmas and New Year, children were indeed making sand castles on the beach!