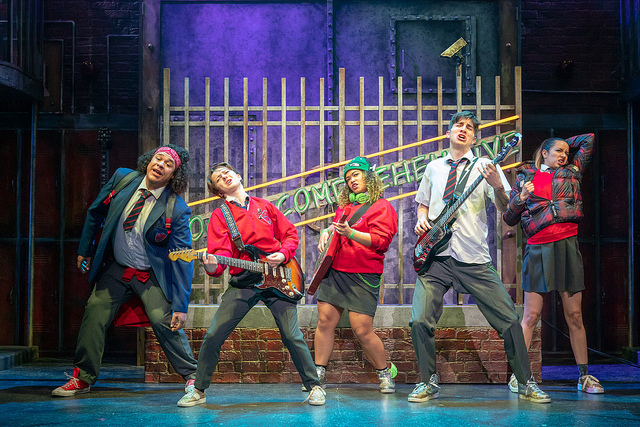 Writer David Walliams talks to Quays Life about taking Billionaire Boy The Musical from page to stage, wacky inventions and what he would do with a Billion pounds!

Coming up with an idea to create an overnight fortune is the stuff dreams are made of. And that’s exactly what we have in Billionaire Boy The Musical. The story begins when factory-worker Len Spud and his son Joe become overnight billionaires, due to Mr Spud’s revolutionary loo roll invention, ‘Bum Fresh’. And the opening musical number leaves us in no doubt just how rich Joe Spud is.

‘He’s got five hundred pairs of trainers, one hundred inch TVs, one hundred thousand pound a week to spend on shopping sprees…he’s got it all!’

Or, so it seems on the outside. ‘Billionaire Boy is about a boy who’s got everything he could ever dream of’ says Walliams. ‘But he doesn’t have a friend. The story is his journey to realising that money isn’t important and that there are other ways to be happy.’

Several of Walliams’ children’s books have been adapted for stage and television before, including Gangsta Granny, Mr Stink and Awful Auntie, but this is his first work to be turned into a musical. So, how does he feel about it?

‘Thrilled. I actually love it when my books are adapted and become something completely new,” he says. “I had a lot of fun creating this world, the super-rich boy who’s got a waterslide going from his bedroom down into his swimming pool. It’s a big wish fulfilment fantasy!’

Were there any challenges bringing it to life?

‘I would say the scale of the book is the main challenge for any adaptation. It is huge. Joe is a billionaire and we really need to get a sense of that. That is very hard to do on stage! But I went on the first night and I was absolutely blown away.

‘I was watching it thinking wow I’m laughing, I’m crying. Who came up with this story? It was me! But these guys have taken my book and turned it into something absolutely winning and beautiful and funny and incredible.

‘I am absolutely gobsmacked at how brilliant this show has turned out!’

Billionaire Boy The Musical features cast of 10 with live music played by onstage musicians. Miranda Cooper and Nick Coler, the team behind multiple UK Top 10 hits for acts such as Girls Aloud, The Sugababes, Kylie, have written 18 brand new songs for the musical.

‘I thought the songs were fantastic,’ Walliams says. ‘I am not at all musical so I am in total awe of the songwriter, singers and musicians. There was so much more to it. They’d added loads of jokes, and the songs completely lift the whole thing.

As well as large musical numbers, the show brings the wacky inventions from Walliams’ book to life, including ‘Bum Fresh’ and the newly introduced ‘RajMobile’. Does Walliams have any more genius inventions up his sleeve?

‘No,’ he says, ‘but I think that a toilet roll that is dry on one side and wet on the other is compete genius! It is the best idea I have ever had. Someone needs to manufacture it and pay me a penny per bottom wiped.’

Apart from belly’s hurting from laughter, what does he hope audiences will take away from the show?

‘That there are more important things in life that money and fame,’ he says, ‘I think I wrote the book when I was really falling out of love with the idea of being famous. All that really matters is that you are loved and love in return.’

And what he would spend a billion pounds? Walliams doesn’t have to think, quick as a flash he replies: ‘Cake. Obviously.’

Billionaire Boy The Musical is at The Lowry, Salford Quays from Thursday 14 – Sunday 17 February 2019. Visit website for tickets.