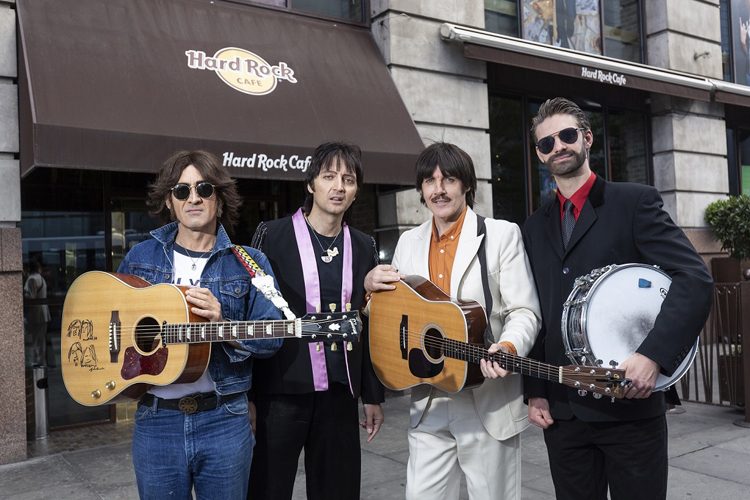 More than two million people worldwide have seen Beatles’ show, Let It Be since it burst onto the musical scene in 2012.

Now the show, which has enjoyed West End and Broadway runs, is returning to the stage on a UK tour for 2018 – but not as fans will have seen it before.

Let It Be: A Celebration of the Music of the Beatles Part II features all the Fab Four’s classic tracks from the 1960s. But while the first half of the theatrical performance is comprised of those favourites from the group’s stellar career, the all-new second half imagines a world in which the four Liverpool musicians reunited a decade after they went their separate ways.

Promoter and lifelong Beatle fan, Jeff Parry, of Annerin Productions, talks to Quays Life about changes to the smash hit show, and what UK audiences can expect.

Where did the idea for this new production come from?
Well, funnily enough it was the original idea. I’d had in my mind for 30 years what a reunion of The Beatles would have been like. It was bringing it down to a significant time when you could do it. I thought 9 October 1980, John Lennon’s 40th birthday, rather than a fictitious date, and I wanted to keep it a positive scenario. So, I always wanted to do that.

Then when I first came upon, Rain, which had started in North America, they said, we already have a Beatles show, and I said okay, that makes sense. That became an entity in itself, and the show kept working. We later split with Rain and created Let It Be in the UK, and it was really successful.

Anyway, I was trying to figure out how to put out a separate show from Let It Be, but creating a competing show with so many others already in the market was a concern.
I came up with the idea of condensing the original show into the first half and doing the reunion in the second half. I wasn’t sure if this was possible with all the costume and set changes, but our production manager said he could pull it off, which was a bit of surprise.

Next, we had to worry if we were messing with a successful brand – but frankly stuck with the Beatles mantra that creating change and pushing the limits is what made them unique. With that in mind, we told promoters who had booked the original show that, although the name remained Let It Be, the show now included a reunion. I guaranteed if the audiences didn’t like it more that we would return their money.

So what can fans of Let It Be expect from the new show?
The whole (original) show is in the first half. It’s like it’s on steroids! All the set changes remain, and you still get the whole show. All the content is there. Half way through we do Sergeant Pepper, and sometimes people get up after that, thinking that’s the interval!

The first half ends with the final medley from Abbey Road. Before the second half starts, we scroll film saying The Beatles are squabbling and breaking up. Then eventually John and Paul are talking again and we say what if they DID get together? Just imagine!

The Beatles of 1980 are dressed in clothes of the time and there are no costume changes in the second half. The lighting and whole feel is very natural.

You’ve staged the new show in the US and Canada. What has the audience response been like?
It’s neat watching people’s faces. They’ve never seen things in a context like this. We start off with a Paul McCartney song and then a Lennon song. All four Beatles get a chance to lead.

Along with the solo songs we have added Beatles songs which were not in the original show, like Got To Get You Into My Life. You have to imagine what they would have done if they had reunited – I’m sure it would have been even more eclectic.

We had Japanese and UK partners in to see it and they said: “This is a better show than the other one.” It’s because it’s unique. The online chat is that this is the best Beatles show ever.

If you had been a fly on the wall at a real reunion, which song would you have liked to have heard them play?
Oh gosh, I haven’t really thought about it! Probably Helter Skelter – I’ve always wanted to see them rip it up like that.

I’ve got a bunch of favourite songs. And Your Bird Can Sing, and I Need You are two others.

What were your initial expectations/ambitions for the original Let It Be show?
I had absolutely no expectations for Let It Be (then called Rain) when we were asked by a radio station in Calgary to get a Beatles band to play five songs in their parking lot to announce the opening of their new brand Q107. I had been in the music business as a promoter, record label and producer for 25 years at this point.

I hated Beatle tribute bands, as their first intent was to look like them with musical ability not even close. I usually ran when the opportunity to see a Beatle tribute show presented itself.

In this case, we found the group Rain who were older and could play note for note. They blew me away and that took something.

So it’s easy to say that from going from a parking lot to Broadway, the West End and now our third tour of the UK was never close to my expectations, and if had told my wife she probably would have had me committed!

Which part of Let It Be Part II gets the biggest audience reaction?
The second half of the new Let It Be brings an emotional response as this gives the audience something they never have seen, a reunion which could have been.

I love to watch people’s faces when they see a Lennon song followed by a Harrison song. It’s almost as if they didn’t link the two together. Oh yes, those guys were in the same band at one time?

The Lennon songs from Double Fantasy and then, of course, Imagine bring real emotion as they have never been performed live, and it reminds us all of how much he is missed and how much more he could have contributed.

It’s now almost 50 years since The Beatles broke up. Why do you think their music and legacy endures?
It’s quite simply why The Beatles’ music still lives on, great songs, nothing else. Their life stories wouldn’t be of any interest otherwise.

They had this magic and one has to give Brian Epstein the first credit in shaping them to look appealing and not giving up on getting a record deal, as without his panache and will to make it happen I am sure it would not.

Secondly, George Martin helped shape their songs in ways they couldn’t, but learning from that they expanded their ideas past their early, more simple material.

I also feel that for my generation, they grew as did we all. Although this all really only happened in seven years, those were formative years for those like myself who was nine in ’64.

There’s been no other band which took the risks and grew without being obviously commercial. Today it would be suicide for a group to try to wander from their obvious fan appeal, one reason why music is so boring.

Tell me a bit about your personal relationship with the band and their music. You’ve described it as the “soundtrack of my life”.

I got into the business because of The Beatles. I was given their first album at the age of nine. No matter what other music I got in to, I always put The Beatles on a pedestal with no peers. They are still my ‘go to’ group throughout the week when I want to get a lift.

I have a wide interest in music from classical to AC/DC, but nothing compares to The Beatles. They’re in a league of their own.

Have the real Beatles reacted to Let It Be?
The Beatles allow Let It Be and the other related Beatle shows to survive as long as they are not pushed. We have the grand rights for the Lennon/McCartney songs as well as those from George Harrison and Ringo Starr which are played in the reunion.
That is rare, and recognises that Let It Be has the quality above all of the other ‘tribute shows’.

What’s next for Jeff Parry?
Interesting, we are starting up a new division of Annerin Theatricals, which will deal with book musicals, meaning those with a script.

Let It Be is not a book musical and has a very limited script. It tells the history of The Beatles through the music, played in chronological order, film clips and costume changes.

We have a few new titles which are going into production, the first being Juke Box Hero, which features the music of Foreigner.

I was approached by Phil Carson, who used to run Atlantic Records in the UK and noted for his relationship with Led Zeppelin, signing AC/DC, Twisted Sister and ABBA amongst many others. He knew that we were starting to do shows on Broadway and said that he had a treatment for Juke Box Hero written by Dick Clement and Ian Le Frenais, whom had also written the screen plays for The Commitments and Across The Universe. Phil said if I paid for the script the show was mine.

That was seven years ago and we are now mounting it Alberta this coming summer with design for it to be Broadway and West End bound. At least we’re taking it up a notch from starting in a parking lot this time as we are in a legitimate theatre!
It seems I am surrounded by Brits and thank God for it. We’re also looking in to a show based on the life of Alice Cooper and his manager Shep Gordon, again with a treatment written by Dick and Ian. We’re actually trying to mount it in the UK within the next couple of years.

Thirdly we have a John Lennon bio, Through A Glass Onion, which we want to produce on a larger scale than the original two man show, which played Liverpool.
Yes, so at the ripe old age of 62 I seem to have more passion then I did when I was younger. Time will tell ‘when I’m 64’.

Let it Be is at The Opera House, Manchester from 22-27 October 2018. See website for full tour details.