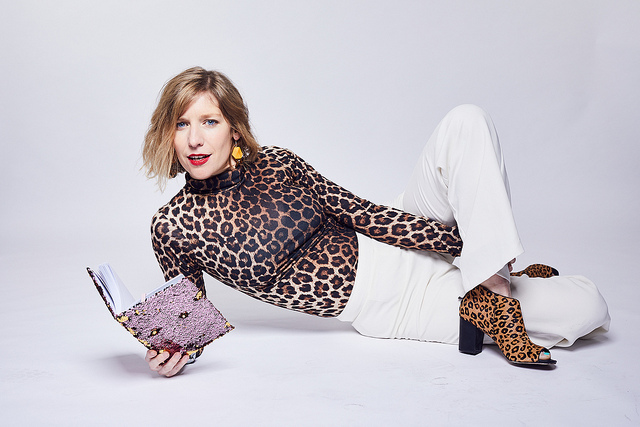 Who is Pamela DeMenthe and how did you create her?

In Pamela’s eyes, Sticky Digits was a roaring success. She sold several copies and there was even talk of a movie deal with an amateur filmmaker from Shepton Mallet.

Now she needs to follow the success of Sticky Digits with a new scorcher; a time travelling prehistoric romp set in Hull: eVULVAlution. But only half way through the writing she is suffering from an acute case of writer’s block. With the book tour already booked and potential sponsor from Beverly mobility Aids showroom she is feeling the pressure.

I grew up watching a lot of comedy on television. My Dad really got my brother and I into watching programmes like The Day Today and Alan Partridge, which is where my love for the dark and surreal parody began.  Comedy writer/performers, Julia Davis, Jessica Hynes, Garth Marenghi, Alan Partridge, Chris Morris have all been massively influential on my work. I wrote my dissertation on the Brass Eye paedophile special at drama school and after three months of badgering his agent, I was lucky enough to interview Chris Morris. That still remains a career highlight.

You’ve been on the scratch scene for over five years now. What challenges have you faced as a theatre maker during that time?

The producing has probably been the toughest aspect for me. Really all I want to do is write and perform but to make this a success I’ve had to produce too. In many ways it’s been good for me, to prove that I can do it, and I’ve learnt so much,  but now I’m making this show with The Lowry, I’m able to focus my time on the creative stuff.

‘eVULVAlution’ has been produced as part of The Lowry’s Artist Development Programme ‘Developed With Artist’. What are the benefits of working alongside a venue like this to create new work?

I get a bespoke package of support to develop the new show. There is a team of people behind me helping and offering guidance and advice. As I’ve worked mainly on my own for the past few years it’s so great to be collaborating. Plus it’s only a short tram ride away!