Tim Foley won the 2017 Bruntwood Prize Judges’ Award with his sci-fi comedy, Electric Rosary. Ahead of the play’s world premiere on the Royal Exchange main stage he talks to Carmel Thomason about writing, coffee and robotic nuns

Tim: “It’s the story of a robot nun! We’re in a world of tomorrow and there’s a struggling convent that is gifted a new device from the council. It’s a story about faith and technology and hopefully it’ll make you both laugh and cry”.

What inspired you to write the play?

Tim: “A long time ago, I went to visit a monastery my Grandad helped build. He’d kept in touch with the monks there and they welcomed me in. I noticed their numbers were dwindling and they were having to think up solutions around this. Fast forward a few years, and I’m talking to young farmers about new technologies on their farm, and the two worlds started to collide in my head…”

Have you told your Grandad’s monk friends about the play?

Tim: “I haven’t, not yet! I’ll send them the script book though. I’ll also send one to Tyburn Convent, a religious order in Hyde Park who helped me hone some details. I hope they all see the play as a celebration of their lifestyle”.

Did you write it with the Royal Exchange in mind?

Tim: “Not originally. I wrote it whilst on residency at Pentabus Theatre Company, which is a beautiful theatre in rural Shropshire. I was given the time and space and money to write anything I liked, for no space in mind. Once I finished it, I moved to Manchester and saw loads of shows in their giant spaceship, but I could only dream of having a show in there myself one day!”

What does it feel like to have your play performed in the main house?

Tim: “It’s phenomenal. It’s a gorgeous space where you can see all the audience, so you can really engage them. It’s a huge arena too, so we get to wrestle with the play’s big themes in it.”

The play won the Bruntwood Prize Judges‘ Award in 2017. How much involvement have you had in bringing it to the stage?

Tim: “Lots! They even flew me to America to do some development on it in New York. I love how the play has grown over the intervening years – it feels like it speaks to our times more than ever”.

How does it feel to have other people take on and explore your vision for the play?

Tim: “It’s a humbling and terrifying experience to see how many people are working on it! And everyone is bringing their a-game. I’m so excited for what we’ll all achieve”.

Was there anything in anyone’s interpretation during the production that took you by surprise?

Tim: “Not really by surprise – I look forward to creatives bringing their own thoughts and opinions because I think a play becomes more rewarding when it’s an artistic melting pot. Our director, Jaz Woodcock-Stewart, comes from a devising background and brings a really fun playful energy into the room. All the best comedy moments have been concocted by her and the actors, not me!”

Do you use much AI technology?

Tim: “I’m actually RUBBISH with technology. I don’t own a functioning laptop, and I write all my first drafts by hand. I did enjoy researching AI though, I had lots of interesting conversations about what the future holds”.

What is one task you would have automated in the future if you could?

Tim: “If I could automate anything, I think I’d have a machine that makes the perfect cup of coffee…but they already exist, don’t they? Need to get myself to Argos”.

What are the plans for the play after this run?

Tim: “I’m not sure about the play’s plans, but I certainly plan to put my feet up and breathe a huge sigh of relief! I do hope the story lives on. It’s being published by Nick Hern Books so I hope it falls into the hands of inquisitive writers who are inspired to write their own weird sci-fi plays”.

Electric Rosary by Tim Foley is at The Royal Exchange Theatre, Manchester from 23 April to 14 May 2022. Read our review by Steve Timms. 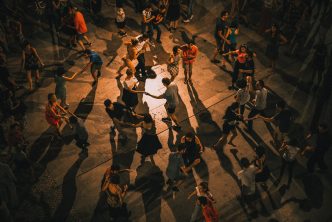 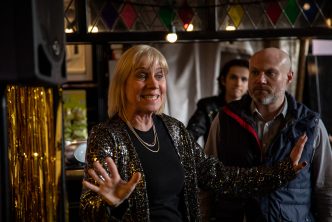