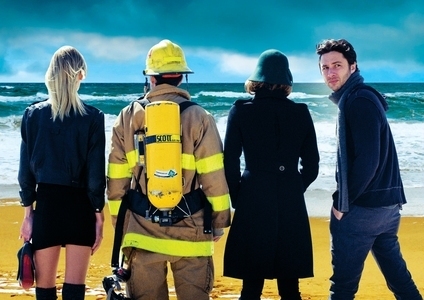 Having a Hollywood actor in the starring role is always going to be a crowd puller, especially when he’s young and attractive like Zach Braff. Yet it is heart-warming to see that Braff isn’t taking anything for granted, and the effort is clear.

Braff enjoys stretching himself creatively and is one of those guys who seems to be able to turn his hand to anything. Probably best known for playing Dr John ‘J.D’ Dorian in TV comedy Scrubs, Braff wrote, directed and starred in 2004 indie film Garden State, for which he also won a Grammy for compiling the soundtrack.

All New People is his first play, and while it had a short run off Broadway last summer, this is the first time that he has taken a role in it. For fans of Garden State it has the same existentialist outlook, with a random bunch of aimless characters searching for some meaning in their lives. However, this time the search has more of a sitcom feel, with fast-paced dialogue which zips along so quick that it’s hard at times to keep up with the gags.

Set in a chic New Jersey beach house in the winter, the play opens on the darkly comic scene of Braff’s character, Charlie with a noose around his neck, trying unsuccessfully to extinguish one last cigarette before he jumps. He’s interrupted by Emma, an estate agent whose accent is so British ‘it’s like Madonna or Gwyneth Paltrow’.

Emma (Torchwood’s Eve Myles) thinks that her timely appearance could be a sign from above and initially tries to talk Charlie round. But after a bit of manic banter she’s not so sure, hence the cue to call fireman, Myron (Paul Hilton) to the rescue. Escort, Kim (Susannah Fielding), who has been sent by Charlie’s friend to cheer him up, is the final guest at this bizarre party.

Back stories of each of the characters are filled in with filmic interludes, and we are presented with four people, all lonely, vulnerable and broken in their own way. These broad brushed characters aren’t new, but the performances make us believe them. Braff is charismatic and generous on stage, sharing the limelight and the laughs with a great supportive cast.

There is an edginess to some of the humour, which makes it an adult only show, and the on stage smoking is unnecessarily excessive. Yet, for all its brashness, it has a heart, not least in the love that Braff has given to it.