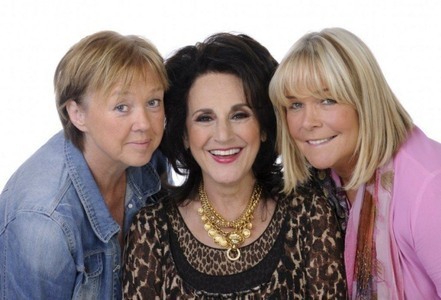 Birds of a Feather

In recent years we’ve seen many TV shows take to the stage, hoping to cash in on a ready-made fan base. The enjoyment is usually in a nostalgia trip rather than in the merit of the shows themselves, which tend to be a rehash of familiar stories from several TV scripts and one or two of the original faces.

What makes Birds of a Feather stand out is that the producers have persuaded the three main stars of the 90s sitcom – Pauline Quirke (Sharon), Linda Robson (Tracey) and Lesley Joseph (Dorien) – to front the stage tour. And not only that, they have reunited creators Laurence Marks and Maurice Gran with two more of the TV show’s most prolific writers, Gary Lawson and John Phelps, to make a brand-new script.

It was a winning combination on screen, and, with the sitcom format containing the main action within two settings, it works just as well on stage. Now 15 years on, for those wondering whatever happened to the two sisters whose husbands were serving time for armed robbery and their man-eating neighbour, we’re about to find out.

The men, who could have served a life sentence by now, are still off the scene. It’s still very much all girls together, which gets raucous and at times filthily funny.

Tracey still has her fancy house in Chigwell, which she shares with sister, Sharon, and the baby we saw in the final episode – Travis, who is now nearly 16 and played alternately by Robson’s son, Louis Dunford, and Quirke’s son, Charlie Quirke. Quirke, of course, is eight stones lighter, which doesn’t go without comment, and Joseph injects pantomime energy into the already larger-than-life Dorien, whom we find in the Cherish Residential Home for the Well-off Elderly.

If it sounds all very cosy, it feels all very cosy to watch. There is a warmth on stage as the three actresses slip seamlessly back into the roles they played for almost ten years. Their rapport is a joy and their enthusiasm infectious. In this big reunion the girls are obviously having a riot, and, judging by the laughter, the audience is, too.