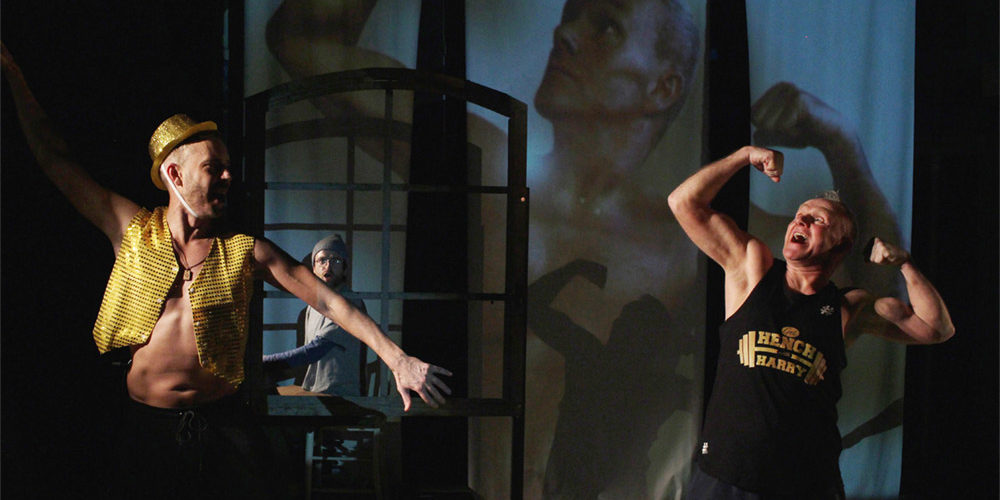 Dorian is a modern re-telling of the Oscar Wilde’s only novel, ‘The Picture of Dorian Gray’. The play’s opening scene sets the tone. We’re invited to peer in as Dorian is seen recording and posting a video message for an on-line dating site. Dorian is a 54-year-old who lost his wife three years earlier. He senses life is passing him by, but wishes to make one last effort to salvage his youth.

Dorian lives with his son Sam who’s in a band with (and dating) Sarah. So far all seems normal. However Sarah has a sideline in vlogging – she has a site where she posts self-help videos for paying followers, under the guise of Spiritual Wellness Image Optimisation. The only draw back is she dreams of the body perfect that is unobtainable. As well as airbrushing her clients, she airbrushes her own images and slowly plants seeds of doubt in Sam’s head that the band’s chances of success could improved if their ‘look’ was improved.

Enter Harry Hench, a gym owner whose slogan is ‘Get Hench with Harry’. Harry has an ambiguous and suspicious relationship with Sarah as we’re never quite sure just how intimate they’ve been with each other. Harry is both an Adonis and annoyingly positive. He is the type of person who can often be heard saying things like, ‘Do or don’t do … there is no try’; or I imagine … ‘If you’re not first, you’re last’.

Their stories converge when Sarah creates an image of Dorian, an image of perfection – the man he could be, if he follows Harry’s six-month plan. Harry uses all his charm, which wouldn’t seem out of place being espoused by a used car salesman. Eventually Dorian signs on the dotted line. His only reservation – he doesn’t believe the transformation could be possible.

The play swiftly marks the six months of transformation by cleverly introducing vivid observations of modern society. We’re shown pictures taken with mobile phones. Edited. Filtered and posted. The cast then wait anxiously for ‘likes’ and or ‘follows’. There’s a clever scene where Sarah and Sam dine out. They leave their casual clothes behind and make a red-carpet entrance to the restaurant. I will wager we’ve all been guilty of at least one of the crimes that are committed over dinner.

As we follow the lives of each character, we realise that they’re living a lie – fake lives. Not one of them is happy with the life they have and that unhappiness stems from how they perceive themselves physically. Each, to varying degrees, toys with augmenting how the world sees them, some digitally others physically – however the principle is the same. The irony that these changes are ostensibly for the self when in reality it’s about external recognition isn’t lost here.

Sam’s character is on stage for pretty much the whole 90 minutes. When not acting he’s ensconced at a keyboard where he provides the score for the piece. The songs that he and Sarah sing are aptly timed and have a poignancy that provides emphasis to the sadness the cast portrays.

The stage is used economically and acts as a gym, a restaurant and Dorian and Sam’s home. The backdrop of the stage houses projection screens that double up as mobile phone screens and laptop screens. This design technology is becoming more and more common in modern plays and it’s handled well here.

The tension in the play is derived from the pacts (whether explicit or not) that are made by the cast. The pact that results in them looking younger, more beautiful and healthier. While in pursuit of this goal each of the protagonists recognise less and less of themselves along the journey. It’s this that provides the conflict and it’s this that the play tries so successfully to portray and in a small way attempts to resolve.

This rendition of the Dorian Gray story is comprised of some very well thought out observations, even if this modern rendition shifts the original’s emphasis, hedonism and libertarian-ism, to the body image concerns of a post millennial generation.