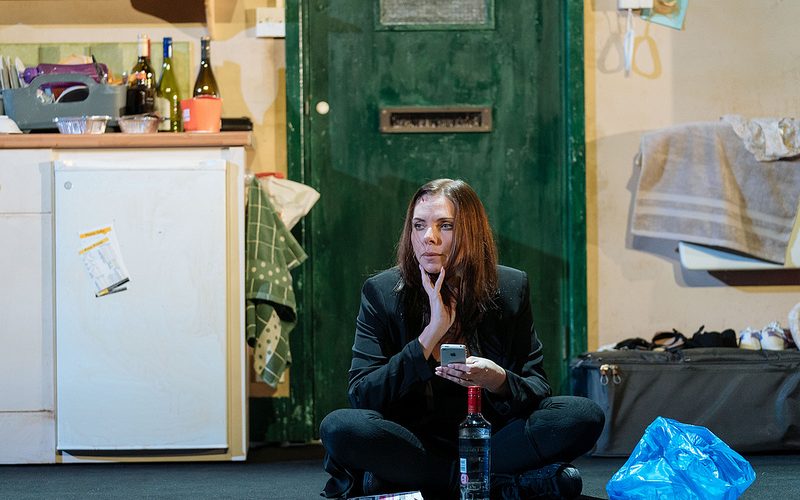 The Girl on the Train Theatre Review at The Lowry

Carmel Thomason3 min readApril 2, 2019
Home » Reviews » The Girl on the Train Theatre Review at The Lowry

The stage version of The Girl on the Train follows the huge success of Paula Hawkins’ 2015 novel and the 2016 Hollywood movie featuring Emily Blunt and Rebecca Ferguson.

It’s probably fair to say most of the audience have either read the book or seen the film. If you haven’t, you’re in for a high-speed ride and I won’t spoil the story. This psychological thriller has twist upon twist to keep the audience gripped to the end. And it is clear from the full-house at The Lowry that even once people know the outcome they want to watch again to look out for clues.

In many ways that’s the enduring appeal of a good who dunnit. When you know the ending it does affect how you watch and some of the tension is bound to be lost. But on a second watch you notice things perhaps you didn’t the first time, making it just as enjoyable for a different reason.

At the centre of the action is Rachel Watson (Samantha Womack), a downtrodden commuter, whose world as she knew it has fallen apart. It seems everywhere she looks there are people living the life she dreams of. First there is her ex-husband, Tom (Adam Jackson-Smith), new wife, Anna (Lowenna Melrose) and their gorgeous baby, Ellie. Then there is Megan, the Girl on the Train (Kirsty Oswald) and her loving husband, Scott (Oliver Farnworth).

Every morning when Rachel’s train stops at a signal, she watches Megan and Scott through the window of their home. In her fantasy they are Jason and Jess – the kind of perfect couple she longs to be a part of. Then Megan disappears and all is not as it seems.

Rachel Wagstaff and Duncan Abel’s adaptation stays close to Hawkins’ gripping story. Andrzej Goulding’s clever projection design is used to re-create the train, as well as metaphorical elements of psychological instability during flashbacks from Rachel’s unreliable memory. James Cotterill’s set design effectively contrasts Rachel’s life to the one she had with Tom. And Jack Knowles dark, atmospheric lighting works to draws us further and further in.

As mousey, none-descript Rachel, wearing ill-fitting clothes and swigging vodka straight from the bottle, Womack is almost unrecognisable from the glamorous blonde we’ve come to know. It’s easier to imagine her as new wife, Anna. But Womack takes this complex, demanding role and makes it her own. She’s at times vulnerable, psychotic, humorous and sharp. There is no doubting she is disturbed. But is she disturbed enough to be a killer?

Womack draws us in and keeps us guessing for the whole journey.

The Girl on the Train is at The Lowry Theatre from 1-6 April 2019 and touring nationwide until October 2019. For full tour details visit thegirlonthetrainplay.com