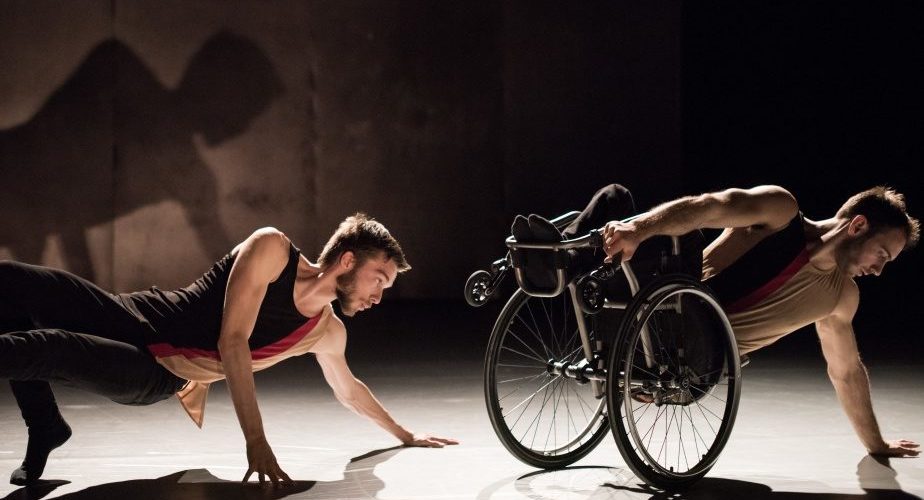 Having heard so many accolades used to describe the work of the Candoco Dance Company and their world class choreography, not to mention the praises following that BBC Strictly performance, it was no surprise that they were opening this year’s Sick! Festival at the Lowry Theatre.

The piece, ‘Let’s Talk About Dis – Candoco with Hetain Patel’ was a unique powerful performance of choreography, even though, there was little dance involved during the half-hour!

A point succinctly made by one of the performers in the 45-minute post show discussion where we had the opportunity to explore issues of identity and representation with members of Candoco and visual artist, Hetain Patel. The playful and intimate performance comes from a critically acclaimed collaboration with Hetain Patel. It exposes hidden prejudices and misplaced political correctness with humour and charm.

To be clear, there is dance, in part and very beautiful cameos of dance, however the work goes further to ‘say the unsaid’ about interpretation and misinterpretation of people’s attitudes to other people’s bodies. The work interrogates our understanding of our fellow human beings in a deeply personal but humorous way, offering us an opportunity to be more transparent and honest about our own communication skills, or lack of them, in order to change perceptions.

Hertain approaches dance from a cross-arts background, blurring the lines between and certainly forming an intimate connection with performers and audience alike.
A huge range of social barriers limit the engagement of people with disabilities into the cultural ‘scene’ in this country and it was interesting to ask and listen to Candocos’ personal and collective experiences of artistic practices in other countries that they hail from or have performed in.

The performance was superb, and I would suggest not to run away from the post show discussion, after all the Candoco Dance Company are keen for all voices to be heard!

Candoco Dance’s Let’s Talk About Dis is at The Lowry Theatre as part of the Sick Festival! on 18 and 19 September 2019.

Read our review of Laurence Clark’s An Irresponsible Father’s… at SICK! Festival 2019.