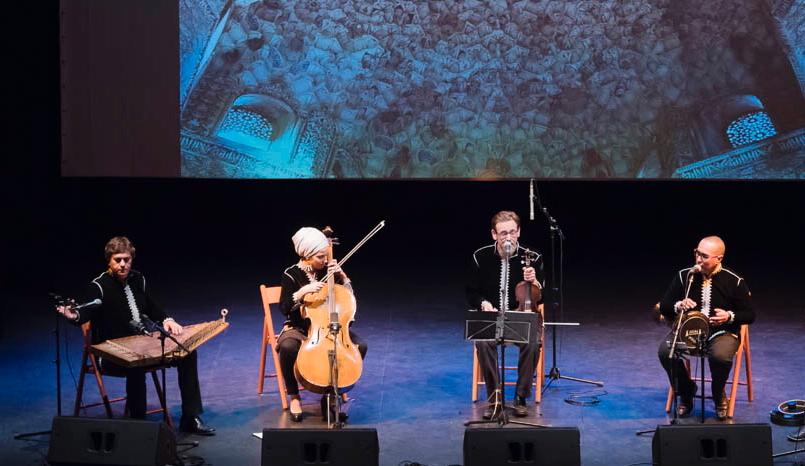 MACFEST, now in its third year, is the brainchild of Qaisra Shahraz, a Mancunian muslim author, whose aim, in the wake of the Manchester Arena terror attack, was to construct a festival aimed at building bridges and confronting negative stereotypes, by celebrating the range and history of the arts in Islam.

When it closes (with a musical finale at the Whitworth Gallery on 26 January), this year’s MACFEST will have showcased 50 diverse cultural events, in venues all across the city.

Tonight, the studio at the Lowry is sold out for an evening of Turkish and Sufi music. First up, introduced with disarming charm and warmth by Aziz Ibrahim (formerly of legendary Manchester bands, Simply Red and the Stone Roses), is the Sabha Ensemble. Based in this city and specialising in Turkish music, tonight they welcome Turkish singer, Gulcin Bulut into their ranks.

Their 30 minute set is catchy, welcoming and accessible, warmly received by a diverse audience; the highlight for me being an upbeat setting of a Rumi poem (whose title, speaking of a wise man’s humility, translates as “I don’t know”).

The rest of the evening belongs to Al Firhaus, a quartet (a quintet this evening for reasons I’ll explain) of highly accomplished musicians, led by violinist, Ali Keeler, playing an impressive range of Sufi poetry set to music from around the Mediterranean and beyond. One beautiful number is actually an adapted Celtic folk tune, accompanied by sacred praise.

The set opens, as is tradition, with a brief recital from the Quran, gently and tunefully sung by Keeler’s son, who has travelled down from Iceland to take part. The rest of the ensemble comprises Youssef el Mezghildi (on qanun), Salam Vives (cello) – both from Spain – and Omar Benlamlih (darbuka and vocals) – from Morocco. Although we are in a sense being treated to an evening of sacred music, there is little formality – the audience is invited to clap and sing along (and there are smart phones everywhere, videoing the performance).

The message is of devotion and joy, and of tolerance between the ‘peoples of the book’ (Jews, Christians, Muslims). Understandably, many are there to reconnect, for an hour or two, with their culture of origin, but please remember that the ethos of MACFEST is to be open-armed and welcoming.

Come along; learn a little about your muslim neighbours and the vast range of their diverse cultural heritages. Have a slice of cake and a chat. Follow the MACFEST hashtag: #SpreadHoneyNotHate