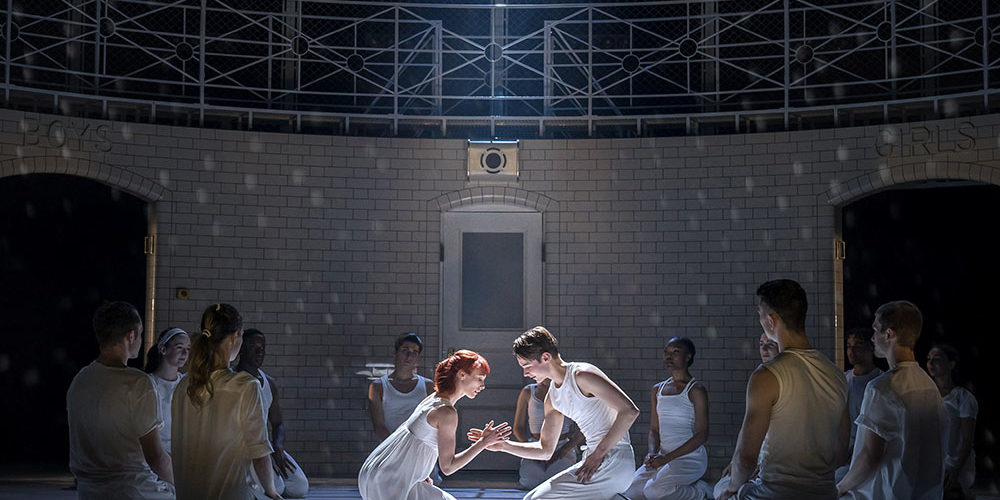 When Matthew Bourne’s New Adventures company takes on Shakespeare and a classical ballet score by Sergei Prokoviev, we are primed to expect the unexpected. If Bourne is to be believed (and he’s a knight of the realm, so he ain’t gonna lie, is he?), Lez Brotherston’s design came first in developing this version of Romeo and Juliet and all else, story and musical adaptation and choreography, followed from it. Bourne is also (and rightly) keen to acknowledge the key contribution of lighting designer, Paule Constable – whose subtle work brings the illusion of multiple locations.

Inside the Verona Institute, a curved white-tiled wall, with separate entrances for ‘Boys’ and ‘Girls’. Hugging the set – which is on two levels – the chain-linked fencing, barbed wire and barred steel gates of the forbidding location. Is it a secure hospital? A detention centre for young offenders? Some kind of psychiatric clinic for troubled teens? Is it, perhaps some kind of experiment in social control (as Bourne himself speculates in his post-show talk)?

The young inmates are controlled by a combination of exercise, group therapy and prescribed medication. They are also controlled by some scary guards. One of these, Tybalt (Dan Wright), is a corrupt and bullying abuser. Stepping in to try to protect one of the other girls, young Juliet (Cordelia Braithwaite) herself becomes the victim. A brutal, though thankfully not explicit, pas de deux leaves us in little doubt of the price she has to pay.

A new arrival, Romeo (Paris Fitzpatrick), the twitching, naive son of Senator Montague and his wife, is briefly tormented by some of the other boys, who strip him of his own clothes before dressing him in the white of the institute’s inmates. Were he in any doubt, his parents’ chilly farewells tell him he’s here to stay.

Verona Institute’s chaplain, the Reverend Bernadette Laurence (Daisy May Kemp) puts on a polite dance event for the boys and girls (think West Side Story). Needless to say, when the reverend leaves the hall, the fun really starts. With raunchy grappling going on all around them, Romeo’s eyes meet Juliet’s. Love at first sight.

An angry, jealous Tybalt breaks up the party, his rage only kept in check by the return of Rev. Laurence.

Then follows the most beautiful section of the piece, as the two lovers, finally alone, cavort up, down and across the set, somehow managing to maintain lip contact through a variety of contortions, twists and turns. There is a wonderful sense of the delight of discovery in the choreography; a dizzying, rushing passion and surprise at new found happiness. It’s difficult to watch without smiling.

Back in their separate dorms, Romeo and Juliet are teased without mercy. Nevertheless, their friends soon lead them out into a gentle ‘marriage’ ceremony.  Of course, the serenity can’t last. A drunken Tybalt intervenes – mad with jealousy and seeming heartbreak. This time, the consequences are fatal, for himself and young Mercutio (whose boyfriend, Balthasar, is inconsolable).

The Institute’s response to this mayhem is to up the meds and, post-interval, Prokoviev’s music (cleverly adapted by Terry Davies, and here played live by a 15-strong orchestra) slows for a danse macabre (imagine ‘Thriller’ on heavy tranquilisers).

The straitjacketed Romeo and his Juliet find their way back to each other (with a little help from Rev. Laurence) but the ghost of Tybalt and cold body of Mercutio come between them and happiness. It all ends rather gorily.

Although the storytelling can get a little fussy and muddled (Does Tybalt really need some kind of brain tumour to be evil? Is Juliet in a co-dependent relationship with her abuser?) there is, as always, much to enjoy and admire in Bourne’s re-imaginings.

The two young principals are heart-winners. That first kiss pas de deux is something to treasure.

The thinking behind the project – to involve young artists throughout the project – is admirable and effective. Tonight’s show features six young dancers from Salford, and young associate artists are involved in every aspect of the production.

There is a slight risk of bathos in the finale, but that, it could be argued, is Will’s fault, not Matthew’s.

If you’re a fan of Matthew Bourne, you’ll love it.

Matthew Bourne’s Romeo and Juliet is at The Lowry, Salford Quays from 2019.

Read our interview with Matthew Bourne about making Romeo and Juliet.