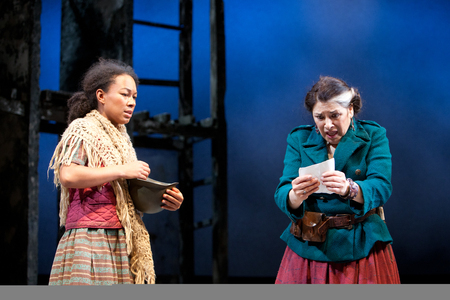 Mother Courage And Her Children

There are always people who will try to profit from any situation, but whether anyone can truly gain from another’s misfortune is a question that hangs heavily over this anti-war play.

When we first meet Mother Courage, she has driven her wagon through open fire because she was carrying 50 loaves of bread that would have gone mouldy otherwise. She claims to be doing it to protect herself and her children. It all sounds courageous enough, as her name suggests. Perhaps she’s making the best of things, or maybe she’s simply a brusque, old cynic who makes her money from war.

Eve Polycarpou brings to life the complex dimensions of the character with brilliance. Watching her we sense a woman who is a product of her time. Mother Courage will not let her spirits be dampened by the horrors of the war, and Polycarpou’s sensitive performance radiates this gutsy humour, while providing glimpses of her pain and leaving us in no doubt about the continual hardening of her character as the fighting continues.

This production is a real showcase of strong female performances. Amelia Donkor brings a much needed emotional depth to the role of Mother Courage’s mute daughter, Kattrin, while Natalie Grady commands attention each time she takes to the stage as ballsy prostitute Yvette.

Judith Croft’s set is stark and simple – no more than two distressed wooden scaffolds, and Mother Courage’s painted covered wagon. It is fitting for such a bleak tale, which leaves us is in no doubt of the long drudgery of the Thirty Years War, which raged across Europe in the seventeenth-century. What makes the subject matter bearable is Tony Kushner’s witty translation, which emphasises the humour in the script, and a score specially written by composer Greg Palmer.

The singing and live musicians on stage lift what is otherwise very dark, heavy and lengthy material, without losing or trivialising the central message that in the end, no-one really profits from war.

Mother Courage And Her Children by Bertolt Brecht and translated by Tony Kushner is at The Lowry from 22 February 2013 to 09 March 2013.