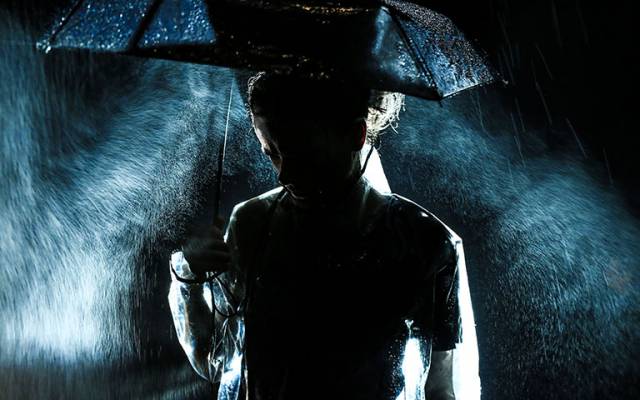 Flo, the most junior of doctors, wearing her scrubs, already weary, stressed, overloaded with information and feeling out of her depth, excluded from case conferences by her white-coated seniors, is in need of a night’s rest, to take it all in, to slough it all off. Instead, she is called to one side by her superior.

“I need you to cover the nightshift,” he tells her – virtually the only clear line of dialogue in the show.

The absence of words is not a weakness. Temper Theatre’s modus is physical theatre, leaning heavily towards dance. The movement here is strong, sharp, inventive, unremitting.

The expenditure of energy is relentless – one can almost smell the sweat (certainly, in the Lowry’s intimate studio space, we can see it drip from every forehead of a thoroughly industrious cast of five).

Devised by director, Finn Morrell, and the cast (with the very able choreographic assistance of Adam Khazmuradov and Juliette Valerio), “Nightshifter” crash-shifts its gears from the quiet opening – a man (homeless? a refugee?) taking shelter from the rain – to a100mph triaging field hospital. From that point on, the brakes are barely touched in its 55-minute whirlwind tour of earthly disaster and humanitarian crisis. (Morrell mentions research with the admirable Médecins Sans Frontières).

From the midpoint, there is a danger of “Nightshifter” becoming ‘one damned crisis after another’ (to paraphrase Arnold Toynbee). An element of restraint and structure is needed to prevent a piece about stress and overload becoming overloaded and stressful. I think devisers of theatre are always well-advised to employ a dramaturg (professional storytellers know a thing or two about structure and pace). However, the blur of intense activity is just about rescued from becoming de trop by the excellent choreography and Sam Penn’s impressive lighting design. Composer and sound designer, Dominic Roocroft, creates menace and tension, and thrusts us ever onward on a wave of unforgiving urgency.

Lives are at stake. Wherever we go with the desperate, determined and occasionally despairing, Flo – be it a war zone, a storm at sea, a fire, a nuclear disaster, a mining accident, catastrophic flooding – lives are at stake. Not all those in need can be saved and there are signs of the mental and emotional strain of losing a patient (these include some neatly surreal moments – watch out for the nod to Harry Potter.)

This is good – if wearying – stuff, served up by a clever and committed ensemble.

Nightshifter was at The Lowry, Salford Quays on 4 October 2019.