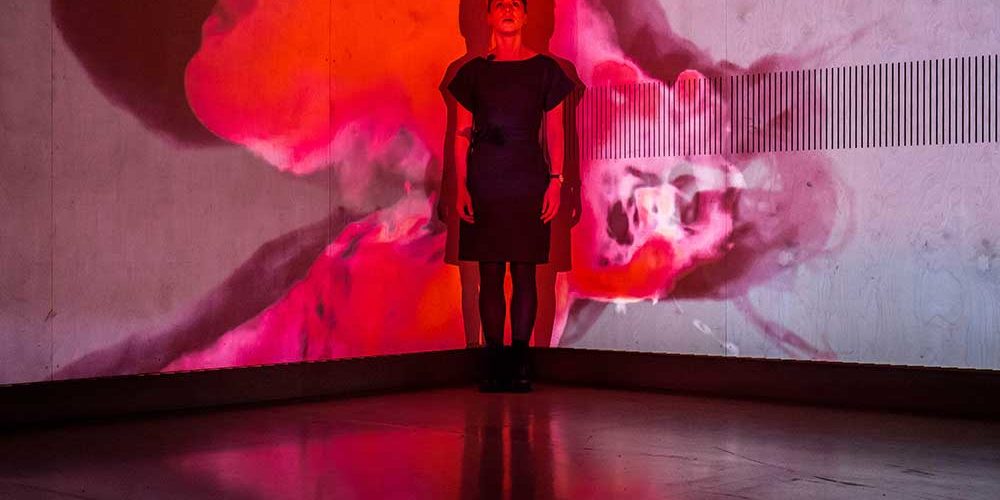 Nuclear Future is an austere call to arms. It takes as its base the insecurities of its lead (and only) actor Astrid, played adroitly by Leda Douglas. She stands solitary on stage flanked by two white panels exploding towards the audience, as if mimicking the aftermath of a nuclear explosion. Leda plays all the key parts within this short dramatisation with convincing aplomb; this includes playing her child ‘Marty’ and her father ‘Papa’. This is cleverly despatched as most of the conversations are held over the phone or via text or email.

The journey we embark on is one that remarks on the awesome enormity of nuclear technology. Something I’m sure, with little or no technical awareness, we’ve all grown to take for granted. This play seeks to address this balance.

Using two parallel streams of consciousness Astrid’s gradual decline into the realms of paranoia are developed before our very eyes – the first stream is the human perspective. The one that stems from a parent’s desire to protect. Astrid tries her best to control her child’s environment by prescribing ‘house rules’ for Marty: “come straight home once school is finished”; “when out with friends – always stick with the group; unless what the group is doing is dangerous”. “Always keep you phone switched on”. “Never talk to strangers”.

The second stream is the more technical one. It cranks up the detail with respect to how nuclear bombs work. Astrid’s explanations of the causal effects of protons, neutrons and deuterium are overwhelming. For example, we’re informed that the bomb dropped on Hiroshima had a 13 Kilo tonne blast yield; the one dropped on Nagasaki had a 21 Kilo tonne blast yield. By far, however, the most powerful nuclear weapon is the Tsar Bomba – it’s Russian and has a hefty 50 mega tonne blast yield with a capacity for an increase to 100 mega tonnes. We’re reliably informed that, if deployed the Tsar Bomba would flatten an entire city – in real terms that means you’d need to walk for seven miles, in any direction of the blast, before you were safe from its effects.

The Dramaturg Miles Mantle, and Lighting and Video Design by Joshua Pharo and Ellie Thompson, ease you into this tale gently. The first half is paced slowly. Contrasting scenes are defined
by stark white light and pitched darkness. In the latter scenes we innovatively see simple text messages played out on a human scale – imagine being enveloped inside a PowerPoint presentation where words and punctuation fizz past you while you write.

This is capped by the display of the staggered effects of bomb blasts, which are digitally rendered to so that we the audience can comprehend each stage of a nuclear bomb’s destructive cycle.

The development of this piece by Josie Daxter, Natalie Klamar and Sarah Readman superbly captures the potential human impact of this technology on day-to-day life. We’re reminded that ‘in 74 years we’ve split the energy of an atom and unleashed the energy of the sun’. You never feel you’re being preached to, instead you’re given a privileged insight into someone else’s world, a world that could easily be our own.

Nuclear Future was at The Lowry, Salford Quays on 24 October 2019.