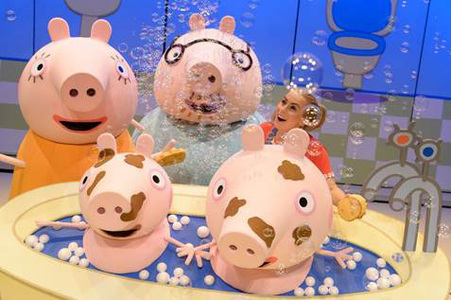 It’s not yet 10am and already there’s barely a spare seat to be had in Manchester’s Palace Theatre such is the pull of children’s TV favourite, Peppa Pig.

I’m here with my four-year-old nephew. The age guide is three plus, but looking around there are many children both younger and older. The show works across a young age-range and not simply because the small screen has made Peppa a mini-celebrity among little ones.

For those still small but a little older there is a lot of interaction with games like hide and seek and I-spy, singing, dancing and the fascination of the puppeteers.

Sticking very close to the TV cartoon we join Peppa and her family on a surprise outing. Peppa and her younger brother, George are worked by puppeteers, while the much larger Mummy and Daddy Pig are actors in cartoon costumes. They have a human friend, Daisy, who works hard to get all the youngsters joining in the games and the songs. Although, no introduction is needed for the Bing Bong song which has the whole theatre – adults too – singing along.

Joining the adventure are Danny Dog, Suzy Sheep, Pedro Pony, the Red Monkey, Mr Crab and Mr Potato. There is also a lovely underwater scene where the stage is lit-up by fluorescent fish, sea horses, and star-fish.

The one-and-a-half-hours is so jam-packed with energy and fun that the children are glued to the story throughout. All the shouting, singing and jumping about keeps them from getting restless in their seats.

Many of the children were still dancing and singing the songs on the way back to the car. Who’d have thought a little pig could provide such a riot of a time, and all before lunch?

Peppa Pig’s Surprise is at The Palace Theatre, Manchester from 22-23 October 2016.