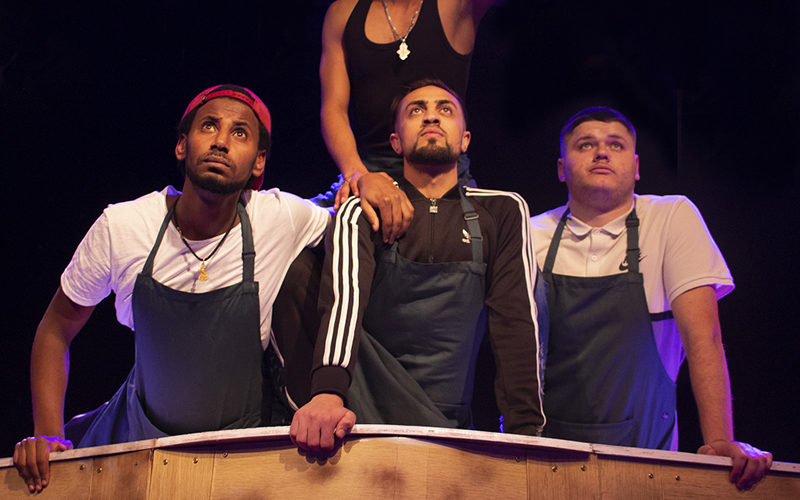 A cast of four male refugee actors (and one female British caseworker) use theatre as their resistance, a platform to tell their lived experiences and make the audience think about the human beings behind the hysterical tabloid headlines – and answering the phones in takeaways.

The pizza shop setting is referenced wittily throughout, with scene titles written on the inside of empty pizza boxes, hats made of packaging and brief scenes where the cast take telephone orders and work pizza dough.

Although their stories of prison, abuse, interrogation, escape and fear – all told directly to the audience – are inevitably shocking and upsetting, the actors are adamant that they don’t want to be pitied. Comedy is a vital part of the work and prevents it from becoming too bogged down in anger and despair – the cast banter with each other and the audience with real humour, listing things to know about England (the weather is terrible, the food is good, English people prefer dogs and children to old people) but always with a dark, ironic edge.

Performances across the cast are excellent, with some really powerful moments: a scene showing the young men’s mothers, while comical on the surface, is poignantly reflective of the positive spin their sons feel duty-bound to put on their lives when speaking to their families. A monologue on the government of Afghanistan is particularly passionate and hard-hitting.

The piece does take a more uplifting turn towards the end, as the four young men imagine bright futures with careers, wives and children – children who, born in the UK, will have a very different life.

‘Pizza Shop Heroes’ is the real deal – it’s not an artistic response to the theme of migration, but powerful, thought-provoking theatre with a purpose.

Pizza Shop Heroes is at Home, Manchester on 4 and 5 October 2019 as part of Orbit Festival 2019. See Phosphoros Theatre Company website for more dates.

Queens of Sheba at Orbit Festival 2019.