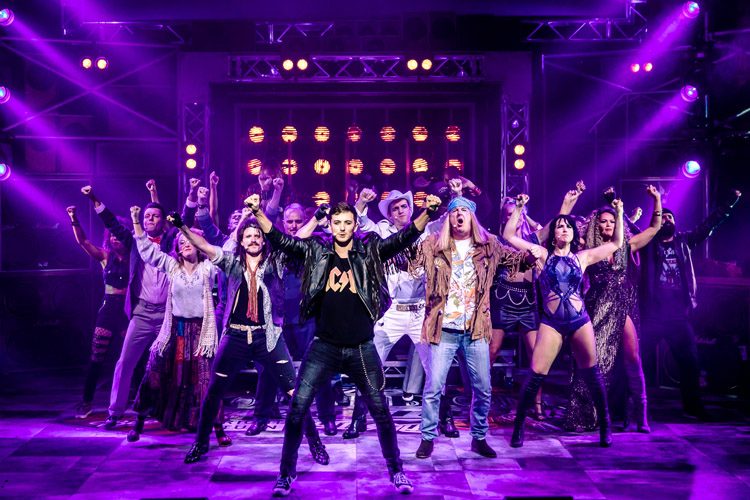 How did Hollywood’s Alec Baldwin find himself in the same casting bracket as Coronation Street’s Curly Watts? It’s a question those who’ve seen the 2012 movie Rock of Ages might well ask on seeing the cast list for the stage musical’s UK tour.

It’s also one the director has already thought of, and it is just one of many self-depreciating gags narrator, Lonny (Lucas Rush) makes about the show. This is a musical that doesn’t take itself seriously, and laughing at itself is what it does best.

To be fair, Kevin Kennedy has done wonders in transforming his career from Corrie favourite to musical star and more than ably fills the role of ageing rocker and club owner, Dennis.

And it is not the fault of any of the cast that the musical doesn’t always quite hit the mark. Rather it’s the lewd gags and broad stereotyping that makes it feel all a little bit sleazy and dated. For all it’s tongue-in-cheek humour, it has twice as much butt cheek on display.

Set in LA’s Sunset Strip of the 1980s, Rock of Ages tells the story of Sherrie (BBC1’s Over the Rainbow winner, Danielle Hope) who in the words of Journey’s Don’t Stop Believing is ‘just a small town girl, livin’ in a lonely world, who took the midnight train goin’ anywhere.’

With aspirations to be an actress she finds herself working as an LA club waitress where she falls in love with fellow dreamer, Drew (Luke Walsh), gets ‘romanced’ then spectacularly dumped by rock star, Stacee Jaxx (Sam Ferriday) and ends up working in a strip joint.

There is obviously more to Chris D’Arienzo’s book, but not an awful lot more. Like many juke box musicals, the story is a mere thread to weave together a stack of hits, of which Rock of Ages has plenty including: We Built This City, Every Rose Has it’s Thorn, Dead or Alive, Waiting For A Girl Like You, The Final Countdown, Here I Go Again, Can’t Fight this Feeling and I Want To Know What Love Is.

There are some belting numbers and strong vocals, which win over the audience. As does, Lucas Rush’s Lonny, who starts off all tongue-out as a weaselly letch, but settles into a more watchable role as he builds rapport and interacts with the audience.

Zoe Birkett, although young to play life-battered whore, Justice, commands the stage and clearly has a massive fan base with audience members cheering every time her character steps on stage.

Aside from the sexist stereotyping, the comedy works best with fun, physical jokes, like seeing hero, Luke Walsh ride out on a toy motorcycle. And for people who lived through the 1980s, hearing the music again is a nostalgia trip and one the audience clearly loved.