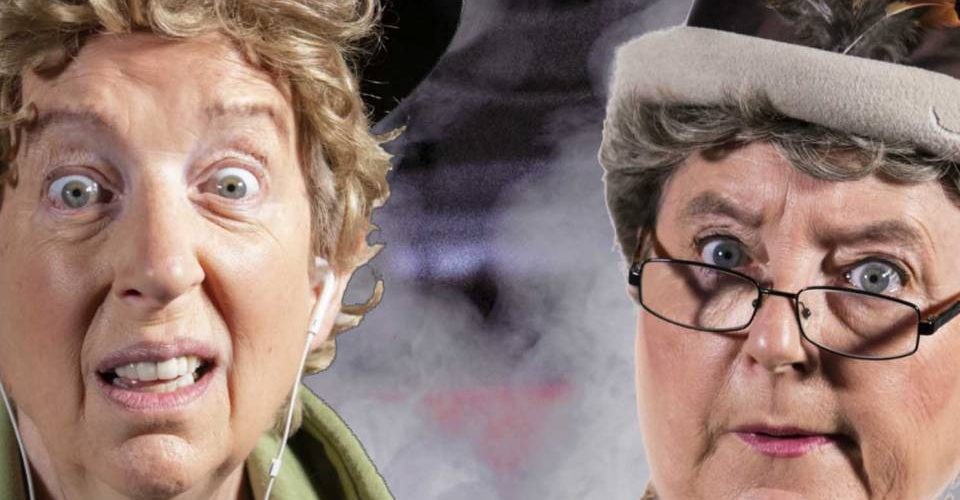 LipService duo, Maggie Fox and Sue Ryding, are masters of the literary spoof. Since 1985 the Chorlton-based comics have produced no fewer than 20 stage shows, turning their unique surreal gaze on genres ranging from James Bond to Norwegian crime dramas, and the enduringly popular Bronte sisters’ spoof, Withering Looks.

Their latest show, Strangers on a Train Set, casts its net wider. This time, the gags come not from one art form but from a rich amalgam of literary favourites, classic films, video games, youth culture, and everyday travel. If you happen to be a regular train traveller their acute observations will leave you howling in recognition, as the pair capture both the mundanity and absurdity of rail travel with the perfect twist of comic exaggeration. We’ve probably never been charged £16.40 for a drink and jaffa cakes at a train buffet car, but the pinch on our purse feels like we have.

The show opens at a talk for railway enthusiasts. Steve loves steam while Geoff is obsessed with the latest Pendolino technology. Together they build a model railway on which we travel through more than a century of train-related stories from The Railway Children from the turn of the 20th century, through mid-century Brief Encounter, to a modern-day Miss Marple in the guise of unassuming knitting sleuth, Irene Sparrow.

This time-travelling murder mystery on a train set takes us from Murder on the Transpennine Express to Briefs on the Counter and back to another murder setting, this time, Murder on the 4.50 to Piccadilly (expected 4.57).

However, there are no delays in this production. It races ahead with perfect comic timing and technical precision as the pair weave film, puppetry and fantastical imagination – interacting on and off-stage with an array of recognisable characters they’ve created.

LipService are seniors with the enthusiasm, energy and playfulness of young children. So infectious is this show that the audience need no encouragement to join-in, re-enacting a scene from The Railway Children by waving and shouting for the train to stop. The atmosphere as the train grinds to a halt is one of pure joy.

This is feel-good theatre at its best, filled with genuine laugh-out-loud moments. For a fun, cheerful evening – don’t pass this stop.

Strangers on a Train Set is at The Lowry, Salford Quays on 17-19 May 2019 and is touring throughout 2019. For full tour details visit www.lipservice.co.uk

Read about the dream-like luminarium experience coming to Salford Quays.