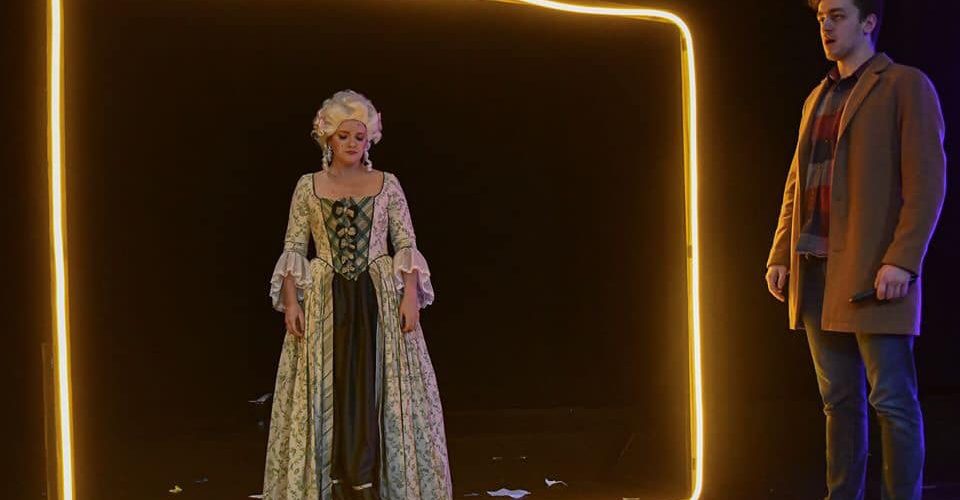 The Marriage of Kim K: Review

Amanda and Mike meet and bond on a plane while watching the the inflight movie – Pride and Prejudice. Mike prefers the book (more nuanced) but Amanda challenges him to watch the film without shedding a tear.

Next thing, Mike is moving in with Amanda – bringing his Louis Theroux cushion with him. Time passes. Tomorrow is their anniversary, and he’s planning to propose.

Amanda has a demanding job (she’s a nurse), keeps getting passed over for promotion, and likes to veg out watching reality TV – specifically Kim Kardashian. Mike on the other hand, wants ‘art not entertainment’. He tries to educate Amanda by introducing her to classic opera buffa – The Marriage of Figaro.

From that moment on, Amanda and Mike’s homelife becomes the Battle of the Remote Control, and this is where the clever concept of The Marriage of Kim K really takes off.

The troubles of this ordinary contemporary couple are amplified and expressed through two other couples – whose strife is acted out on their television screen (neatly represented by two human-sized neon rectangles to stage left and right – credit to set designer, Caitlin Mawhinney). One of these couples is fictional (Count Almaviva and his long-suffering wife, Rosina). The other is real – well, kind of “real” – Kim Kardashian and her first husband, basketball star, Kris Humphries.

Amanda is obsessed with Kim K, who, despite the fact that her ‘marriage has already begun’, is being pestered (much to her secret delight), by a certain Kanye (the audience loved this reveal). Mike meanwhile, is pushing hard for Amanda to concentrate on the Count and Rosina – whose arias are brilliantly and wittily adapted to tell a recognisable story from a diferent angle to the original (e.g. we get much more of Rosina’s angst and anger over her husband’s lust for Figaro’s finacée):

Kim and Kris fall out over her need always to be at ‘the centre of attention.’

‘It’s my career,’ she tells him, pausing to take a selfie in the middle of their ‘first proper fight.’

Meanwhile, Amanda and Mike are edging ever close to the precipice. Instead of presenting her with the ring, his ploy for averting disaster is to buy her a massive new TV. Opening the box, a mysterious light shines out and Mike is catapulted through the screen into the presence of Count Almaviva. Interval.

Post-interval, the show is a little less successful. There’s a sense of musical elements and configurations being added in order to experiment with the form – bold enough, but not enough dramatic motive and narrative clarity. Nevertheless, the conceit – Amanda steps into one of Kim’s make-over tutorials (they bond) – is clever and funny (even though, or perhaps because, we can see it coming).

The libretto doesn’t shy away from some choice words and expressions. Kris serenades Kim with the words, ‘I f*cking love you!’. The Count, after counselling Mike to ‘be confident’, contemplates an imagined liaison with Susannah as Mike psyches himself up to pop the question to Amanda:

The performances of the talented young sextet is one of the undeniable joys of the evening. They belt out a range of styles – operatic, R&B (Beyoncé gets a nod or two, I think), power ballads, raps.  Rebecca McAuley (Amanda) and Jack Herauville (Mike) make “ordinary” interesting. Ben Storey (Kris) never stops running to keep up with the Megan Postle’s force of nature Kim K. John Ieuan Jones manages to make the incorrigible Count into a lovable rogue, while Charlotte Trepess as Rosina pins back our ears with magnificent operatic power and diction that reaches into every cubic centimetre of the Lowry’s studio space.

Director, Francesca Ery has melded her team into a well-drilled (and apparently happy) unit (unlike Kim, nobody here waits to be the centre of attention before starting to act). Gina Hallums has done an exceptional job as musical director (and she must have had able assistance from Daniel Mawson – sound design – and Sam Gee – recording and mix engineer). Ed Saunders’s lighting is mostly well-judged (though I could survive with shorter bursts of full-on spotlights in my eyes).

There are some issues with structure. Syd Field’s insight into RomCom (‘Boy meets Girl, Boy loses Girl, Boy gets Girl back) are at play here. The trouble is, we see too much of the reasons why Amanda and Mike aren’t a match made in heaven to really find ourselves rooting for them to make it through. (I’ve seen this show twice, and still find myself hoping each will move on to a better-suited partner). It also feels a little bit overlong in this reworked version. Enough with the niggles, though, this is a lovely show.

The finale is a treat (well done, Chris Whittaker – choreographer), sending the crowd into genuine raptures. I liked it, too.

At £10 a seat, you’ll be hard-pressed to find a better value night out.