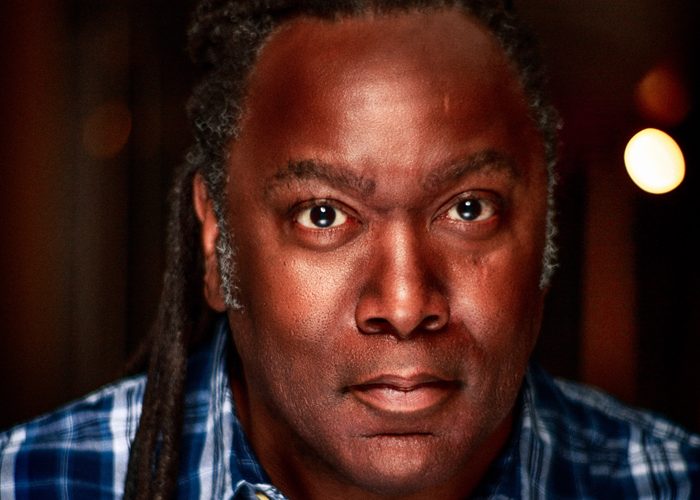 Reginald D Hunter faces the beast that is Brexit

“There’s no problem on earth can’t be solved between two people by 15 minutes of considered chat – that goes for marriage, Brexit, or the Middle East” – Quays Life meets brutally honest comedian, Reginald D Hunter, whose 20th anniversary tour Facing the Beast sees him tackle the thorniest issues of our day.

So, it’s terrific news all round that Reginald is returning to the stand-up arena with a new show entitled “Facing the Beast”. This spring he embarks on a 40-date tour of the UK and Ireland with this hugely anticipated new show celebrating his 20th anniversary as a comedian, living and performing in the UK.

Over those two decades, Reginald has established himself as one of the most electrifying performers at work in this country. He lights up venues up and down the land with his stunning, searingly honest, sometimes provocative material. His compelling routines have attracted an audience that spans the generations. He is a stand-out stand-up.

I’m here to tell you that Reginald is just as magnetic in person. Over a bowl of chicken soup in a North London cafe, he makes for compulsive company, and two hours in his presence simply flies by.

Reginald, who has gained a devoted television audience in such popular panel shows as Have I Got News for You, QI, 8 out of 10 Cats Does Countdown and Never Mind the Buzzcocks, begins by underscoring just what he loves about live comedy. “I adore the interaction with the audience,” he says.

“A woman in the audience shouted out, ‘Show us your c**k!’ I immediately replied, ‘I decline to do that, mam, because it ain’t that kind of party. Let me ask you, ‘Do you go to strip clubs and shout out, ‘Tell us a joke!’?’”

“What I live for is those moments where something comes out of my mouth or an audience member’s mouth that completely surprises all of us. You can’t orchestrate that. That’s when you laugh till there are tears in your eyes.”

The comedian, who has presented the enormously popular BBC2 documentary, Reginald D Hunter’s Songs of The South, and its equally successful follow up, Reginald D Hunter’s Songs of The Border, both of which charted the growth of American popular song, goes on to give an example of the sort of off-the-cuff line that fires up his stand-up shows. “There was one moment where I came on stage when I was lean and pretty.

“A woman in the audience shouted out, ‘Show us your c**k!’ I immediately replied, ‘I decline to do that, mam, because it ain’t that kind of party. Let me ask you, ‘Do you go to strip clubs and shout out, ‘Tell us a joke!’?’”

On another occasion, Reginald recalls, “I walked onstage at a club and asked, ‘How much were the tickets?’ Someone shouted out, ‘£14’. ‘Relax,’ I replied, ‘here comes £9.74!’” It is this sort of hilarious, spontaneous humour that elevates Reginald and makes him one of the most thrilling live comedians around.

The stand-up, who hails originally from Albany, Georgia, particularly enjoys performing in the UK. He explains why he has such a tremendous rapport with British audiences. “I love the fact that they will hear you out. I’m a black man from the South of the US. I was born in trouble, and I don’t expect no game to be 50-50. All I ask is that I know what the rules are going in.

“In the UK, the rules are simply these: you can talk about anything you want, no matter how graphic or goofy, as long as you’re funny. But if you talk about stuff that isn’t funny and isn’t going anywhere, you will be asking the Brits for your ass back. ‘That’s my ass over there on the floor. Can I have it back, please?’”

We are currently going through an especially turbulent era in politics. Reginald admits that, perversely, bad times can actually be good for stand-up. “They make comedians tougher and sharper, if you can survive and you don’t let it shrink your nuts!”

These troubled times are provoking extremely angry debates, and in “Facing their Beast” Reginald will be addressing that. The comedian’s eminently sensible response to the prevailing air of fury is simple: civility. He reasons that, “If I wanted to question your view, I’d say, ‘Sir, you say that, but could I ask you this?’”

He adds that, “There’s no problem on earth can’t be solved between two people by 15 minutes of considered chat – that goes for marriage, Brexit, or the Middle East. These things are easily solvable, but the fact that we have talked about some of these things for 50 years tells me that the powerful prefer the issue to the solution. It’s a matter of divide and conquer.”

In “Facing the Beast”, Reginald will also be tackling the thorniest issue of our times: Brexit. “I consider my team of friends, comedians and writers to be ‘Drama-cide’ Detectives – the name comes from my all-time favourite series, Homicide.

“If I was launching a ‘Drama-cide’ investigation of Brexit, I would advise my British friends to go back and look at whose idea it was. Once you have filled in the blanks, then you have the freedom to decide whether or not you should be mad about it.”

Reginald continues that, “The people who are against Brexit are blaming each other, but they weren’t even in the room snorting cocaine or chasing $3000-a-night hookers with the people who instigated it. To quote my favourite lyric from that great philosopher Eddy Grant in his song Electric Avenue: ‘Who is to blame in one country? Never can get to the one’.”

The comedian will also be talking about how the right wing has triumphed in the US. “They worked out that they could never beat us liberals on civil rights or morality. So wisely, they decided they didn’t want to engage with that. Sometimes you’ve got to tip your hat to the devil.

“So this has been their strategy over the last 10 years. Our lawyer will stand up and say, ‘Crop rotation is not just good for the soil and the crops, but also for the long-term good of the earth.’ The right-wing lawyer will then stand up and say, ‘I love mom, apple pie and yabba dabba-do,’ and the judge will declare, ‘Case dismissed’.”

Reginald carries on: “The right wing has been whopping us over and over with that since George W. Bush. It has culminated in Trump. He responds to morality and facts with anger-inducing, divisive nonsense.

“He can’t get us in the arena of facts and morality, so he’s moved it to a bullsh*t circus where all the laws of gravity are suspended and context doesn’t mean anything. All that matters are feelings, and perspective is greater than reality.”

As you can see, Reginald makes for a terrifically entertaining comedian. His act is replete with dazzling and thought-provoking material.

So what does he hope that audiences will take away from “Facing the Beast”? “I hope that sprinkled in with the jokes and the absurdities is a reminder that we do have solutions like civility and being able to admit you’re wrong when you clearly are wrong.”

But ultimately, “There’s nothing new under the sun. The only new things in the world are mobile phones and the internet. Everything else is based, as it always has been, on money, power, land and sex.

“The people who read Shakespeare will recognise that!”

Reginald D Hunter’s “Facing the Beast” is touring from 2 May – 29 June 2019 and comes to The Lowry, Salford Quays on 5 June 2019. For details visit reginalddhunter.com