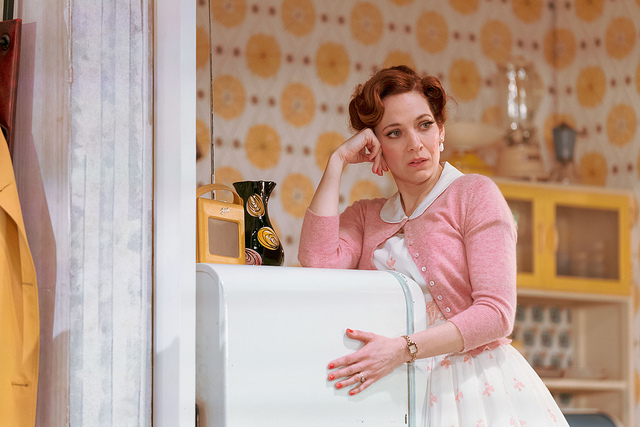 Laura Wade’s comedy Home, I’m Darling is about one woman’s quest to live like the like perfect 1950’s housewife in 2019. But behind the gingham curtains, things start to unravel, and being a domestic goddess is not as easy as it seems. Quays Life chats to Katherine Parkinson (The IT Crowd and Humans), who plays vintage obsessed Judy, about radio, dressing gowns and a life without Netflix and WhatsApp.

Can you tell us about the plot of Home, I’m Darling?

Home, I’m Darling takes place in a 50s world but it’s set now in 2019. I think it manages to touch on many subjects that are very relevant today, plus, ultimately, it’s a love story.

How would you describe your character, Judy?

She’s somebody who has a sort of forensic talent for numbers but she’s lost sight of that talent because she retreats from the world after becoming disenchanted at work. She’s in a loving relationship with her husband, Johnny – and ultimately that’s what saves her. Judy gets stuck into vintage living, adopting a 50s lifestyle, so it starts off as a quite fun quirk, but she ends up getting trapped in it all.

What do you most enjoy about playing Judy?

It’s been a great experience for me because I’ve been developing the play for six years now. I’ve done workshops and improvised situations, then Laura [Wade, the writer] has gone off and written it. So, it’s been written for me, which is a great privilege. I just find Judy a very easy fit, as you’d expect when it’s been me and Laura working on it for years and years, and I enjoy that I get to play lots of different things, lots of different states, because it’s not just funny. And I like getting to dance in the show a bit as well.

Did you take dancing lessons to prepare for it?

[Laughs] I’m unteachable when it comes to things like that. You can teach me the moves, but I’ll always do what I want. I love dancing but I’m not really somebody who can pick up choreography. I just do my own thing, but I enjoy it and fortunately we’ve got Siubhan Harrison, who is a gorgeous dancer, in the cast so she does the proper dancing.

How does the show speak to contemporary audiences?

I think nostalgia is a very relevant theme. There’s a lot of looking back to a time that maybe never really existed and I think a lot of people feel they’d like to retreat from the business of the modern world. There’s also a subplot in the play that touches on ‘What are the boundaries at work? What are you allowed to do, what counts as sexual harassment and what doesn’t?’ That feels very relevant now, as does the theme of a modern relationship and working out ways of communicating – with both of you being in charge at different times and whatever works for a particular couple, not being defined by the performance of marriage, which isn’t always right for the people who are in the marriage. There’s also the idea of trying to live a fantasy life and how, if it stops being good, you have to be honest and live in the real world.

Is there anything about the 50s you think you’d have enjoyed?

I’m so into the clothes. I’m very into vintage clothes so I do appreciate the costumes in the show very much. I also really like the interiors – the furniture on set, the curtains… I love it all. And my favourite outfit? It’s the dressing gown Judy has but you couldn’t really wear that out, could you?

What mod cons would you most miss if you were transported back in time?

I don’t think I would mind only living with a radio and, as Judy does, DVDs of old films. I don’t think I’d mind that at all and I don’t do any social networking because I want to keep my head less busy. [Laughs] But I do think I’d miss Netflix for sure and I enjoy being in various WhatsApp groups, which I guess is social networking in a sense. There’s a lot to love about modern life, isn’t there?

How does it feel to be taking the show back to Theatr Clywd, where it first started out last June?

I love that place so much. It was such a great experience opening it there and the audience kind of made the show because when you first do a show the audience response helps define your performance. You go with the things they go with and you do more of that the next time, so I feel it was very much made in Wales. I’m really excited to go back there. I got to know it a bit and I want to do more exploring. My husband is coming to stay with me and my parents are going to babysit the children, so we can have a proper look around. It feels lovely to be taking the show back there at the end; it feels neat, like a kind of homecoming. Plus this time we’re in the main house, not the smaller auditorium, so it will feel different.

Have you performed at The Lowry, Salford Quays before or visited Salford?

I don’t know Manchester as much as I’d like to so I’m taking my mum along and I have serious plans to do some exploring. My father-in-law Trevor Peacock did a lot at the Royal Exchange so my husband has lots of memories of Manchester and I feel I have lots of links with it without having actually spent much time there.

You’ve done lots of stage work before this. What have been your favourite jobs?

Judy is definitely the highlight but apart from her I really enjoyed doing Terry Johnson’s Dead Funny a couple of years ago in the West End. I played a very different character in a very different play, but I loved doing it. We’d get great audiences for that and I played quite a sad and bitter character. It was a great part in a great play with a great company. Before that I enjoyed doing The Seagull with Kristin Scott Thomas and Carey Mulligan at the Royal Court. I’ve had some brilliant experiences on stage and I feel you get to know your cast more than you do on filming jobs.

What’s the one thing you couldn’t be on tour without?

Family. That’s why I’m taking my husband, my children and my mum along at various points. Also, I really like going for a jog during the daytimes so I’d have to say my running trainers, plus I like having a radio to listen to and a good book to get back to. It takes a while to unwind after a performance, even if you have a couple of drinks, so I like to read.

You’ve been with the show from the beginning. Will it be hard saying goodbye to Judy when the tour ends?

I think I’m going to be gutted. When actors say that I usually think ‘Oh shut up!’ but in this case I’m going to be really sad. It will be hard to say goodbye to Judy, but I suspect me and Laura Wade will work together on and off until we’re old ladies. That’s my hunch so as long as I’m still doing Laura’s writing I’ll be very happy.

The National Theatre and Theatr Clwyd’s critically acclaimed co-production of Home, I’m Darling embarks on a limited UK Tour this Spring, stopping off at The Lowry on 23-27 April 2019.

Read our review of Home, I’m Darling at The Lowry.