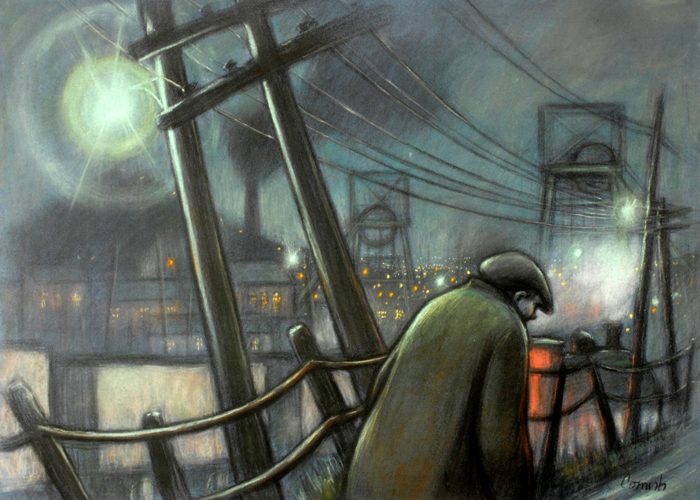 Galleries across County Durham are hosting a year-long centenary focus on one of the North East’s most celebrated artists, Norman Cornish.

Norman Cornish’s depiction of mining life in north east England captured the working heart of pitmen and their communities. It was an industrial lifestyle and landscape that defined generations and yet within Cornish’s lifetime would transform beyond recognition.

The last North East deep mine closed in 2005, nine years before Cornish’s death in 2014. His paintings remain one of the clearest chronicles of both the economic and social history of the region and of the coal mining industry during the 20th century.

As broadcaster, Melvyn Bragg explains: “Where is this community which was the engine of the greatest revolution in the world – the Industrial Revolution? These are the men who made the real British Empire in steam and engineering and shipbuilding, and fed it with a vital power of coal. It’s gone. It has been all but wiped from the landscape and we mourn it and are only just beginning to understand how much it needs to be celebrated. The work of Norman Cornish will lead us there.

“The local collieries have gone, together with the pit-road. Many of the old streets, chapels and pubs, are no more. Many of the ordinary but fascinating people who frequented these places are gone. However, in my memory, and I hope in my drawings, they live on. I simply close my eyes and they all spring to life.” Norman Cornish.

“He stands as a magnificent Chronicler of one of the most important passages in English history.

“The paintings and drawing he brings to us of the hard-lived lives of a community which defied the odds will be enduring. He has not only preserved a life lived by millions of people in this country and others around the world, he has given it significance and permanence that only a real artist can achieve.”

Cornish’s talent for art seems to have been there from his earliest days. In 1923, on a on a pre-school visit to King Street Primary School, he won first prize (an old halfpenny) for his drawing of a lady’s boot. Despite a serious health set-back when he contracted diphtheria aged 7, Cornish excelled at school, passing the Eleven Plus to gain a place at The Alderman Wraith Grammar School.

At the age of 14, like most of his male contemporaries in Spennymoor, Cornish left education to join the Dean and Chapter Colliery three-miles along the road at Ferryhill. The pit was nicknamed locally as ‘The Butchers Shop’, owing to the number of accidents and there are 177 deaths recorded by Durham Mining Museum. Cornish once said of his first day: “When I signed on the dotted line the official said in his deep voice ‘You’ve just signed your death warrant son.'”

Cornish worked as an underground coal miner for 33-years and as part of Spennymoor Settlement Sketching Club recorded his experiences through art.

During his years in the pit, Cornish’s art work was exhibited both nationally and locally. The National Coal Board bought five of his paintings for their London offices and in 1962 he was commissioned to paint a 30-foot mural typifying life in County Durham for the new County Hall in Durham City, for which he was paid £1000 and given three-months unpaid leave from the colliery.

But despite this recognition it was only when a worsening back complaint forced him to leave mining in 1966 that he changed career to become a full-time professional artist.

Spennymoor at that time was changing rapidly and many of the street scenes that Norman painted are the only record of a time and place that no longer exist. The value of Norman’s work as a social-historical document as well as an artistic body of work was becoming apparent. His significance as a major contemporary artist was reinforced in 1974 when he was awarded an honorary Master of Arts degree from Newcastle University.

Further honours followed with an an honorary Doctorate in Civil Law from the University of Northumbria in 1995, to whom he presented a body of his work for their permanent collection in 1997, and an MBE for his contribution to art in 2008.

After his death, Cornish’s studio was donated to Beamish Museum, whose plans to develop a 1950s town include the re-creation of the Cornish family home from 33 Bishops Close Street, Spennymoor.

This year, 100 years since his birth, Cornish’s family has worked in partnership with curators, academics, artists, biographers, galleries and the community to draw together a centenary celebration of his life and work, with many previously unseen pieces on display in six exhibitions across County Durham throughout 2019.

In his hometown, a new exhibition at the Bob Abley Art Gallery in Spennymoor tells the story of his mural depicting the Durham Miners’ Gala.

The exhibition features a range of preparatory paintings, drawings, sketches and correspondence plotting the artist’s sometimes challenging journey from the commission of the nine-metre mural by Durham County Council to its installation at Durham’s County Hall, Aykley Heads where it remains.

In Bishop Auckland, the Mining Art Gallery, part of The Auckland Project focuses on community identity in Norman Cornish – A Slice of Life. The exhibition is co-curated by residents of Norman’s home-town of Spennymoor, alongside his children John and Ann, all guided by the gallery’s curator Angela Thomas of The Auckland Project.

“We felt it was important to give a voice to the communities Norman lived amongst and took inspiration from,” Angela says.

“We’ve invited them to choose some of their favourite works and think about what they mean to them today, highlighting how Norman’s work continues to resonate with all kinds of people. There has been a hugely positive response to Norman’s work from visitors since the gallery opened in 2017, and we hope the centenary celebrations encourage even more people to come and discover his unique point of view.”

Other highlights in the region include The Norman Cornish Trail in the artist’s hometown of Spennymoor. Here visitors can walk in Cornish’s footsteps guided by a free trail guide or app offering insights into many original locations which inspired his paintings – taking people back to a time when coal was once the life-blood of industry and of the communities who mined it.

The Story of the Durham Miners’ Gala Mural runs throughout the centenary year from 6 April 2019 to the end of February 2020.

Norman Cornish – A Slice of Life opens at the Mining Art Gallery, Bishop Auckland Market Place on 6 April and runs until 5 January 2020.

Norman Cornish – The Definitive Collection at The Bowes Museum 16 November 2019 to 23 February 2020.