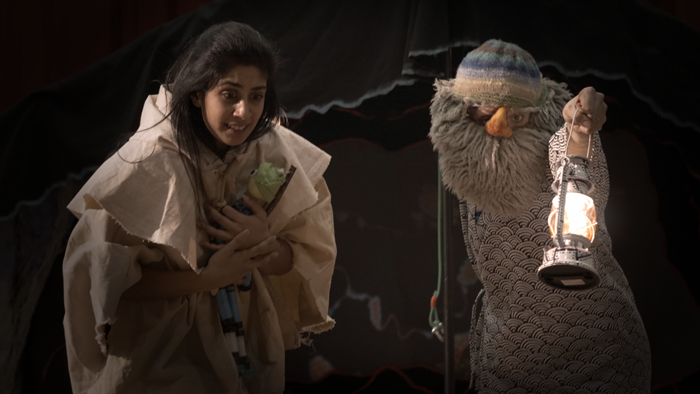 This month Cheshire-based theatre company, Forest Tribe are transforming libriaries across the north west into the watery world of Alluriat. Quays Life meets director, Debbie Bandara to find out more.

How would you describe the world of Alluriat?

Alluriat is a watery wonderland where two sisters have a bond that seems unbreakable beneath the waves. Told by two performers – Purvi Parmar and Jennifer Kay – using puppetry, illusion and physical theatre, this bold new show fuses stunning visuals and digital technology to explore themes of love and division, nurture and abandonment and environmental change.

What has been the reaction to the first shows?

Over 350 children have seen the show so far and 800 more are due to see it over the next 2 weeks. The response has been amazing, with audible gasps and squeals of delight from the audience. The show is non-verbal and all the children engaged deeply with the story and understood the characters’ journeys. The teachers were also surprised at the level of engagement, especially from the high proportion of children attending who had never seen theatre before.

Why do you think children’s theatre is important?

In the UK, children’s theatre is not as highly regarded as ‘grown up’ theatre. However, the level of detail needed to create imaginative work to engage children is a skill.

Children’s theatre is important as it inspires creativity and imagination. We want to ignite an interest in the arts and an appreciation of how stories are told in different ways.

Today, the world is becoming ever so technological, and theatre provides a visceral, tangible form. Its live and immersive nature is also crucial to children’s social awareness.

Do you remember your own first experience of theatre and what was it like?

I rarely went to the theatre until I was in my teens, I went to see “Starlight Express” and this was a very exciting piece of theatre. I was completely enchanted by the theatre experience itself and then watching such amazing performers on stage. It was certainly a seedling that has stuck with me.

What do you enjoy about taking a performance into a library space?

It’s the opportunity to perform to audiences that might have never had the chance to go to see a theatre show. To be able to bring a show to their own library is special.

Libraries have changed drastically over the last few years and are finding new ways to engage audiences. But what is so enjoyable is the diverse group of people that visit the libraries.

It is wonderful when we perform to find other people randomly stopping by and watching.

So far, the majority of children in the audience have told us that ‘Alluriat’ is their first ever experience of theatre. That is an amazing honour for us and we hope it will inspire them to seek out more live theatre as they develop.

What is the most unusual space you’ve worked in?

The smallest library space was Uppermill in Oldham. It was our Diwali themed show, “Prince of Fire” and the space was absolutely tiny. But, it had a wonderful presence and the audience had a great experience. We have also performed in a traditional Indian theatre space in London on an earth floor.

What is special for you about site-specific theatre?

Site-specific theatre is special, because we are interested in taking risks and looking at ways to adapt to different settings. In a way, we like to think-out-of-box.

It is obviously lovely to perform in theatre venues, but in order to reach diverse audiences, we have to make that extra effort to go to unusual places. There you tend to find the most interesting work and that is what really inspires us. Sadly, mainstream theatre still tends to mostly cater for a particular audience sector, often from more privileged and less diverse backgrounds.

You run Forest Tribe Dance Theatre from a restored watermill in Cheshire with your husband, David Freedman. Where did the idea for that project come from and how has it inspired your work?

The watermill was a ruin initially, David restored the mill over several years from scratch and it is a labour of love. We are now generating power from a turbine which supplies up to 70 homes with green electric.

Living in such a space makes you aware of the environmental damage we as humans are causing everyday. So, we are very conscious of what we are doing and the impact it has on our local environment.

Over the years, we have come to understand that everything has a reaction and we must make even the smallest positive steps to make a difference. Children seem to have a far greater ability than adults to see where change is needed and adapt without hesitation and that is one of the many reasons we love working with them.

Alluriat is an immersive and interactive theatrical adventure for 7-11-year-olds, touring libraries across Greater Manchester and Blackburn throughout March. See website for details.