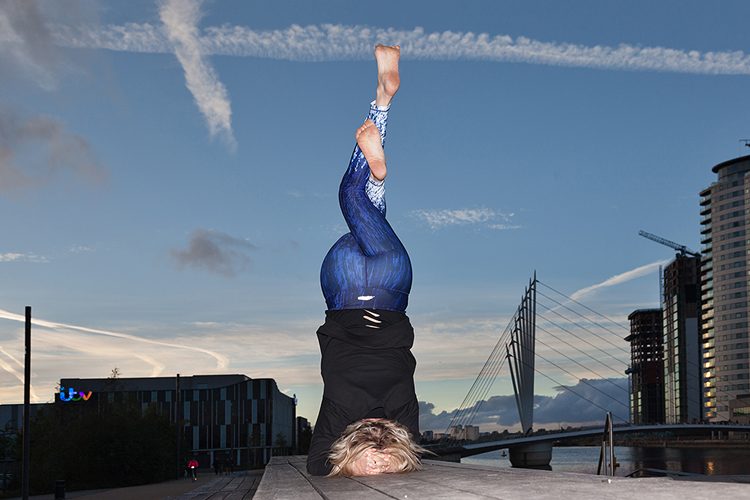 Forget-Me-Not: Heather Lawrence mixes fashion and fundraising to remember her dad who died from Alzheimer’s

Photographer and owner of Bakasana Activewear, Heather Lawrence explains why she loves Salford Quays and used the area as the backdrop to a very personal charity fundraising drive.

What drew you to Salford Quays?
I live a few miles away in Mottram, but visit often. It’s a great place to photograph and explore or just meet up with friends. I’ve been to some fantastic events down on the Quays. I love the place, the atmosphere, the buildings, the architecture, the lights and most of all the water. I’ve got a particular affinity with water. My dad was a sailor when he was a young man and I used to work on a cruise ship many moons ago. I spent quite a bit of time abroad too working on a dive boat. I also take fine art underwater photographs, but at the moment I’m focusing on my other business which is selling sports and yoga clothing.

Why sports clothing?
I’ve been really interested in yoga for a long time because of the health benefits. It has really helped me and lots of people I know.

Several years ago my dad became ill with Alzheimer’s, so in order to care for him I needed a business that I could do from home which would also help nurture my creative side. I started designing yoga pants using abstract images created by manipulating my photography which I then sold online and at the occasional trade show.
Sadly dad died a year ago, so now I’m using the business to try to raise much needed funds for two charities which help families like ours who have had the heartbreak of losing a loved one to this horribly cruel disease.

How are you raising the money?
After dad died, I felt compelled to do something. After going through such an awful time ourselves my thoughts are very much with others in the same situation.

So why did you decide to do your latest photoshoot at the Quays?
It is a place I love, but it seemed particularly poignant and relevant because of the water and the Imperial War Museum. My dad, John Stanley Lawrence joined the Royal Navy aged 16 and served on various ships including the HMS Challenger and the HMS Glasgow as a Petty Officer during World War II. As a boy sailor he served around the Mediterranean, Malta and Middle East. On his 18th Birthday
(31/08/1945) he was photographed in Penang in the Persian Gulf as part of the welcoming committee, as a Japanese Admiral came aboard ship to sign the peace treaty.

He later went on to work in pensions which enabled him to spend more time at home with the family, however ships and the forces were always a big part of dad since he was very proud of his Navy roots. I was also very taken with the poppy installation at the Imperial War Museum for Remembrance day.
Although dad served during the Second World War it felt like there was a lovely symmetry about the use of a flower symbol for remembrance and the use of the Forget-Me-Nots for Alzheimer’s.

When did your dad become ill with Alzheimer’s?
Dad was first diagnosed with Alzheimer’s in 2011. This dreadful disease took him away from the kind caring man he was and left him in an anxious state most of the time which took him and our family on a rollercoaster journey. The early stages saw him a recluse, depressed and living in and out of reality. In the later stages he faced anger, aggression, paranoia and at times had an extremely tormented mind. My mum and I and family members cared for him at home as long as we could, but the year before he died, dad was eventually sectioned under the Mental Health Act and was in hospital for 6 months. It was heartbreaking.

How is the fundraising going?
Well, there’s still a long way to go, but it’s going well I think. Lots of people are helping me spread the word including lovely Dominika who is the model in the photos. Dominika is an avid yogi and also works at Salford Quays. In August I asked for her help to organise a seven day Yoga Challenge on Instagram. With three other amazing yogis she posted fantastic images of different poses each day (#forgetmenotyogawhere). People from all around the world joined in by posting not only their pictures, but their stories about dementia too. It was amazing to see, read and be a part of.

To find out more visit bakasana.co.uk