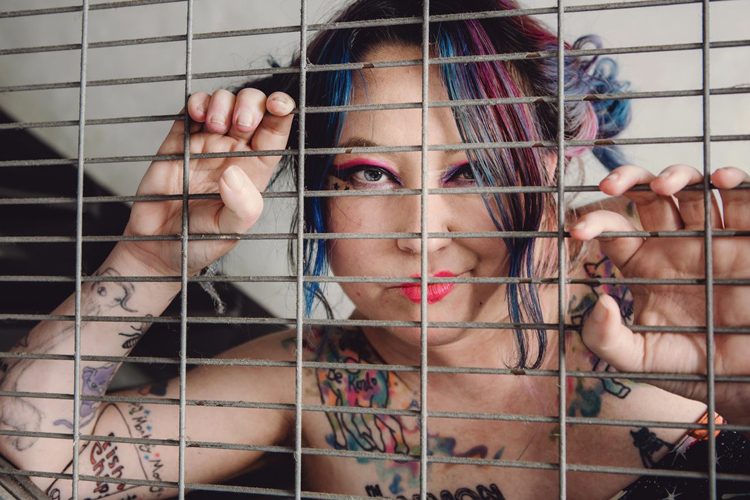 Comedian and playwright, Jackie Hagan has written a brand-new Christmas show, The Forest of Forgotten Discos, that innovatively integrates sign-language and visual storytelling into all its performances. She talks to Quays Life about improving accessibility in the arts,  dreams of unicorns, and creating a ‘Vic Reeves Big Night Out’ style show for kids.

Can you tell us a bit about The Forest of Forgotten Discos?
It’s a fun, quirky and full of love show for ages 5 and up. Red has run away to the Forest where she meets some runaway teddy bears and their naughty computer-generated friend Alexa, from the Amazon.

What inspired your ideas for the show?
A few things. One: I lived on a rough estate surrounded by woods growing up in Skem, so I was always making up stories about what would happen if I ran away to the Woods. Two: a lot of the schools I’ve worked in, in the last few years, have got ‘Forest School’ now where they teach kids by taking them into the woods and letting them just be. Which is brilliant.

Do you see any of yourself in the character of Red?
Yes. She’s pretty feisty and cocky but underneath she’s got a lot of stuff going on. She’s scared of a lot of things but has to build a bravado to get through the day.

Is it an interactive experience?
It’s not an interactive show like a Choose Your Own Adventure Book, but it’s not the kind of show where you are sat in the dark being ignored. The audience are cast as runaway teddy bears and if you want to sit right in the action you can, and if you want to sit with other people who don’t want to be in on the action you can too, there’ll be games that involve the audience. For adults who’ll get this reference, think more ‘Vic Reeves Big Night Out’ for kids than ‘Cinderella’.

What’s your first memory of disco?
Trying to dance with Susan Matthews to ‘The Bart Man’ but being rebuffed – I even had my knock-off Naff Naff top on.

If you stumbled on the forest of forgotten discos what song would you dance to and why?
‘Shake it Off’ by Taylor Swift because it helps you to accept yourself and not worry about people who are gonna hate. Everyone should have the freedom to feel good about themselves and not be bullied for supposed flaws.

Did you really drink champagne out of your glittery leg?
It seemed the obvious thing to do. I had my leg off in 2013 and toured a comedy show soon after called, ‘Some People Have Too Many Legs’. In it I did drink champagne out of my leg, but more interesting for me was, during the amputation scene we had bubble machines and dancing unicorns as a dream sequence.

What do you think is the biggest misconception about accessible theatre?
The biggest misconception is that it’s just for disabled audiences. This idea that you have one version the show for audiences and one version that you just put on once for disabled audiences. If that’s the best for certain groups that’s cool, but it gets more interesting when you try to integrate the access into the show itself and think about this before you even put pen to paper. It means that you can communicate in words, sign, visual storytelling – making different areas for different people in the audience. All of this goes together to make a much richer show; this is how society should work.

How have you integrated sign-language into the show?
Red, the main character, has got a deaf mate in school, so Red already knows some sign language and is used to just communicating in a way that is very visual, big hand gestures, and there’s a bear in the Forest, Bear Minimum, who is wise and wears a tabard (always respect a bear in a tabard!). As such everyone knows a bit of sign language and Red is upfront about stuff she doesn’t get. Alexa is always sneaking about and she fills in the gaps when someone isn’t signing. The show is creatively signed, as is the way with younger theatre groups now, but we’re gonna have a few shows signed in the old-fashioned way too in case there are audiences who are happier communicating that way.

What is the one thing you would like to see happen to improve accessibility in the arts?
We need more opportunities for writers, actors, and directors whose stories are barely ever told. So, I mean accessibility in the wider sense – working class artists, refugee artists, disabled and D/deaf artists, BAME, LGBTQ+ artists. We need people to tell their own stories, when we see our own problems and real lives acted out we feel more valid – like our lives matter. It’s knowing that society values you and your story. It gives people self-esteem and when people have self-esteem it makes every interaction easier and more authentic. And for the people who don’t know those stories, it means we can gain understanding without the embarrassment of being scared of what to ask. It means we can all calm down a bit about some of the things society is stressing out about and start being people with each other.

The Forest of Forgotten Discos written by Jackie Hagan and presented by Contact Theatre is at Hope Mill theatre from 11-23 Dec 2018.