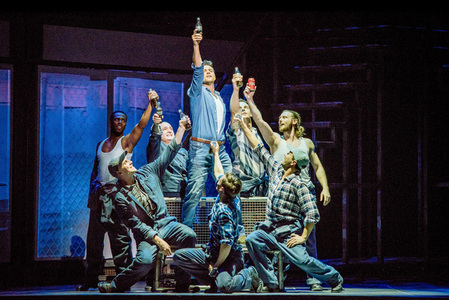 Ben Adams first rose to fame at age 16, as lead singer of boyband a1. Since then, he’s proved to be an all-round entertainer, working as a singer-songwriter, music producer and regular reality TV favourite – a finalist in Celebrity Big Brother, Danish Master Chef and Norway’s version of Strictly Come Dancing. This month he releases his first solo album and his new musical, Eugenius! is playing til March at The Other Palace, London. If that wasn’t enough, Ben is also on stage as the romantic lead, Nick Hurley in the UK tour of 80s musical, Flashdance. And, he still found time for a five minute chat about the show – what a guy!

What attracted you to make the move into musical theatre?

I’ve always loved watching musicals. In the past I’ve always had to turn down musical theatre parts as the schedule didn’t match up to all my other commitments, but I’d spent the first half of 2017 stuck in the studio writing and producing for other artists and fancied a stint on stage rather than behind the scenes so when Flashdance came along I thought it was a great opportunity to give touring a go!

You came second in the Norwegian version of Strictly. How did you get involved in that?

I still tour with a1 all over the world-Scandinavia is a particularly big territory for us-always has been. So I get asked to do Tv shows all over the place. That time it was Norwegian strictly that asked and I thought it’d be fun!

How has it helped with your preparation for this role?

It hasn’t really as my character does almost no dancing whatsoever!

(This is surely a waste, especially as he’s opposite Strictly Dancer, Joanne Clifton – although Ben does get to show a few moves in the final medley, and it’s a treat.)

What do you most enjoy about playing the romantic lead, Nick Hurley.

It’s a great part. Lots of good songs to sing and a lot of angry acting.

It’s close, but obviously it’s twice as long as the film so there are new characters and story lines in addition-plus new original songs as well as all the big hits.

Why do you think the story of Flashdance is still relevant today?

Because it’s the story of someone realising their dreams. That’s relevant whatever year we’re in.

Well I’m obviously singing and acting somebody else’s words in Flashdance. A1 is all my own so I can be freer and change things whenever I want. Both are fun!

You’ve written a new musical, Eugenius. Can you tell us a bit about it?

Yes! Firstly it’s amazing and everybody needs to see it! The response has been incredible. If you want a theatre experience like no other grab yourself a ticket-it only runs til March 3rd and is fast selling out. 80’s inspired and so much fun. One reviewer said – ‘if you could bottle the elation at the end of Eugenius you’d make a fortune’. Nobody leaves without a big fat smile on their face and I love sitting in the audience experiencing it with people.

Do you think we’ll see it in Manchester soon?

Depends what we decide to do after this run-tour it or find it a good west end venue. Would love to bring it to Manchester eventually though.

Everyone has heard Irene Cara’s What a Feeling, from the movie. What feeling do people leave the theatre with after the show?

They leave feeling like they’ve had a bloody good time. Everyone is up on their feet night after night and in the party spirit – as are we after every show!

Flashdance is at the Palace Theatre, Manchester from 12-17 February and touring nationwide until October. See website for details.

Written by Carmel Thomason
Add comment
From the Deep Dark Wood to a Whole Farmyard of Fun
FacebookTwitterPinterestWhatsApp
Rosie Fleeshman on life, ambition and millennial expectation