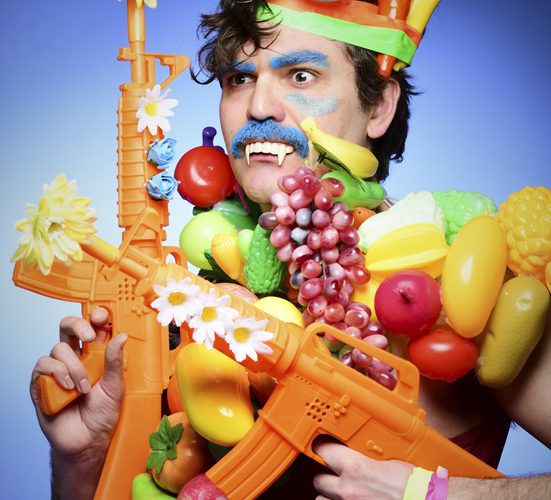 Comedian John-Luke Roberts talks to Carmel Thomason about his tongue-twister of a new show, All I Wanna Do Is [FX: GUNSHOTS] With a [FX: GUN RELOADING] and a [FX: CASH REGISTER] and Perform Some Comedy!

John-Luke Roberts is on a journey to discover the 24 lost Spice Girls. Yes, as well as Mel B and Mel C, he introduces us to the forgotten Mel A right through Mels D-Z. He meets a few pirates along the way and comes across a little-known Alan Bennett tale, ‘A House With Too Loos.’

As you’ve probably guessed, Roberts revels in absurdity. Even the title of his most recent show, now on tour after a successful Edinburgh Festival Fringe run, is designed to cause chaos for headline writers.

As a writer, the Newcastle born comic has contributed to TV shows: ‘Have I Got News For You’, ‘Newzoids’ and ‘Nevermind the Buzzcocks’, as well as penning a sitcom ‘Bull’, co-written with Gareth Gwynn, starring Robert Lindsay and Maureen Lipman, in which he also takes an acting role as, Nigel Mainpart.

After 7 solo Edinburgh Fringe shows Roberts has steadily carved out a reputation as a master of mayhem. His new show ‘All I Wanna Do Is [FX: GUNSHOTS] With a [FX: GUN RELOADING] and a [FX: CASH REGISTER] and Perform Some Comedy!’ is touring the UK til May 2019, stopping at the Lowry on January 19. Here’s what to expect:

Tell us about your show?

My show is a manifesto for absurdism told through 24 fictional Spice Girls. It’s also got 10 too many jokes, 42 too many characters and exactly the right number of plinths.

What happens if you get an audience of millennials?

Everyone has a lovely time, while also thinking “I wish there were some Generation Xers, some Xennials, some Baby Boomers and some over-seventies here, because then we could use this shared experience of a comedy show to see that there is more that unites us than separates us, and start to heal the deep rifts in our society”.

Your act is described as ‘alternative comedy’. What does that mean to today’s comedy audience?

Out of the comedy characters you’ve created, which is your favourite and why?

In my last show I played a version of the English poet Geoffrey Chaucer – but played him as an idiot who’d had his clothes stolen by a fairy, and who spoke a mangled version of English the audience could barely understand. I wore some flowers on my head, a penis made out of an uninflated modelling balloon and a blanket to precariously cover my modesty. There’s something fun about taking a high-culture reference, and doing the stupidest possible thing with it. “Ee am Jiffrey Chowcer, middy evil poot. A poot is lick a reeter, but moo ee lick to rim! At end of every line ee rim. Lick, lick lick, rim, rim rim”. But this year I get to play a witch, a giant, a vampire and the ghost of an Irish girl who left her country, like many thousands of others, in pursuit of a new life in the Spice Girls.

Is it important to you to look funny as well as talk funny?

The way I look at it, it’s a way to put some funny on top. Sure, you can talk funny and that can be really entertaining. But if you can look funny too, then that just adds more funny. And why stop there? It’s also useful to feel funny, to taste funny, and to smell funny.

What part do props play in your act?

The part they play is this:
Stage 1. I think “I am not going to use any props this year because they are too much trouble to carry around.”
Stage 2. I think “But it would be funny to have a prop to at this point in the show. OK I can use just one prop in the show, because it will make it funnier. Just one though.”
Stage 3. I have 53 props in the show.

Any singing or dancing in the show?

You’ve been touring since October. Has it changed much since then?
It’s basically the same show, but there’s always bits changing and new jokes turning up. You need to keep a show slightly fresh for yourself because the audiences can tell if you’re bored of it.

How do you keep yourself interested when doing the same material every night?
Each audience is different so the show always feels new.

As well as stand-up you do lots of other writing and presenting work. What else are you working on at the moment?
I’ve just been co-writing a top-secret radio revival for a beloved comedy troupe, but I’m not allowed to talk about it yet. Apart from that I’m writing a novel about a bee who thinks he’s a horse (it’s an allegorical piece about consumerism and the Lisbon earthquake of 1755) and working on my next show.

John-Luke Roberts: All I Wanna Do Is [FX: GUNSHOTS] With a [FX: GUN RELOADING] and a [FX: CASH REGISTER] and Perform Some Comedy! is at The Lowry, Salford Quays on 19 January 2019. Tickets available from www.thelowry.com