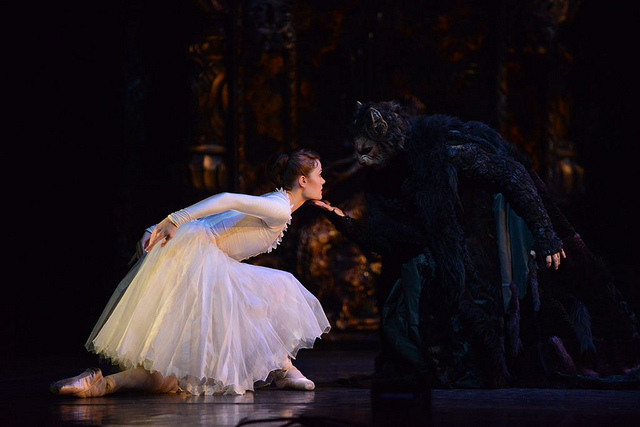 
“It’s definitely not a twinkly, Disney version of the story; it’s quite a lot darker” – Quays Life chats to Delia Mathews, who dances Belle
Birmingham Royal Ballet’s Beauty and the Beast.

When and why did you first start dancing?

Delia: “I started when I was 5-years-old. Basically, I went to dancing because my sister did it; I just went along and wanted to be like her”.

What are the best things about being a ballet dancer? And what are the biggest challenges?

Delia: “I love being on stage, telling a story and being able to take people away from their everyday lives, forgetting their problems for those two hours in the theatre. Also, Birmingham Royal Ballet is a touring company so we get to see the world quite a lot, which is cool. I guess the biggest challenge is that we do long hours and it’s hard on your body, but when you do a performance it’s all worthwhile”.

As you’ve mentioned, ballet is a pretty demanding profession – there are long hours, it’s very physical and you have to travel a lot. What motivates you?

Delia: “In rehearsals and in class you’re constantly working towards a performance so that, hopefully, when you get on stage you don’t need to think about all the details; it should be ingrained in your body. We work hard so that in the show it all comes together, and you have that wonderful moment that makes up for everything. I am also motivated by always trying to better myself; trying do a better performance than last time or the time before that”.

Can you describe a typical day in your life when you’re on tour?

Delia: “Our shows usually finish quite late, so I’ll get up later the next morning and have breakfast, a coffee and relax with friends. We then have our daily ballet class and the rest of the day depends on my performance schedule. If I’m dancing in the matinee show I need to get ready a lot faster. If I have to wait until the evening performance, then I’ll go for a longer lunch; I’ll have something filling like pasta.

“My go-to pre-show snack is a honey and banana sandwich because I know that’s going to be give me energy with making me feel too full. Next, I’ll have a bit of a rest, maybe do some physio and then start getting ready for the show at around 5.30pm. However, this is my routine on tour now I’m a principal dancer; it was very different when I was in the corps de ballet, which is non-stop all the time. Every role is different, and every dancer will have their own methods of getting ready and preparing for the show”.

How do you get into character before a show?

Delia: “Belle’s hairstyle takes quite a long time, and obviously I can’t do anything else while someone’s doing my hair, so that’s a good time to be quiet and think about the ballet, the story and start getting into character. It’s a rare moment of reflection which enables me to focus on the emotional aspects of the role as I’m literally being transformed into someone else. Afterwards, I’ll do my own warm-up and practice some of the steps. I like not having to be Delia in roles – not being myself on stage – I actually really enjoy that”.

Will audiences be familiar with the story of Beauty and the Beast or is it quite different from the famous Disney film?

Delia: “I think the story is pretty much the same but there are a few key differences. It starts with Belle reading a fairy tale before she is transported into the world of her story. It’s a wistful moment, with Belle wondering, ‘Why can’t anything like that ever happen to me? Why can’t I have that fairy tale adventure?’ Slowly, the story of Beauty and the Beast builds around her. It’s definitely not a twinkly, Disney version of the story; it’s quite a lot darker. However, all the family will still enjoy it – just don’t go expecting to see Belle in the bright yellow ballgown! There aren’t any dancing teapots, but we do have a chair which comes to life, so there’s still a lot of magic involved”.

What’s it like coming back to dance the role of Belle for a second time?

Delia: “I always really enjoy coming back to dance a role again because the first time you do it, you’re really focusing on the steps and the musicality. However, no matter how long it’s been, when the music comes on in rehearsals muscle memory kicks in and you do automatically remember a lot of the steps. It’s really nice to have that base knowledge, so you’re at a better starting point second time around and can start to develop the finer details. Last time I danced with Iain Mackay as the Beast, which was really great because he’d done the role a lot, so he was able to pass on little tricks. This time I’m dancing with Tyrone Singleton, who has also done this ballet a lot, and we’re working on building a rapport together”.

What do you think makes a good partnership, both in rehearsal and on stage?

Delia: “You have to have mutual respect, I think that’s really important, and chemistry. Coordination is also hugely important because everyone is slightly different. You need to know each other so well that if something goes wrong, for example, you know what the other person is going to do. In a really good performance, when everything comes together, you are completely in sync with one another and it feels really nice”.

What is your favourite part of Beauty and the Beast?

Delia: “I really like the final pas de deux, when the Beast has transformed back into a human. Belle is really confused because she fell in love with the Beast, but he’s disappeared and there’s a stranger in his place. There’s a really nice moment, which reflects a scene earlier in the ballet, where the Prince touches her hand to his heart and she realises that this is still the person she fell in love with”.

Delia Mathews appears as Belle in selected performances of Birmingham Royal Ballet’s Beauty and the Beast, on national tour from January to May 2019 and coming to The Lowry, Salford Quays on 20 – 23 March 2019. For details or to book tickets, visit brb.org.uk.