Director Robin Herford jumps back on the acting saddle

Robin Herford’s production of The Woman in Black has been terrifying audiences in London’s West End for 30 years. But while its success has led to high demand as a theatre director, its left Robin little opportunity to return to his first love, acting. That is, until now.

He talks to Quays Life about his first stage role in 33 years as Arthur in Visitors at Oldham Coliseum.

Robin Herford is no stranger to Oldham Coliseum audiences, having directed a play at the theatre almost every year since 2002. However, his role as Arthur in Visitors will see him not only make his Coliseum stage debut, but a return to stage acting after 33 years.

“Quite often someone will ask how we learn our lines and actors often say: ‘Well that’s just part of the job,’ but actually as you get older it gets so much harder. You think, ‘Why won’t that phrase go in?’ and ‘Why aren’t I seeing the connection between that speech and that speech?’ So, approaching a new text for the first time since 1985 is quite a challenge for me and one I have taken on. I relish it.”

The play that has enticed him back to the stage is Barney Norris’ multi-award-winning debut play, Visitors, which premiered at the Arcola Theatre, London in 2014. Robin takes on the role of Arthur who finds his world turned upside-down when his wife, Edie is diagnosed with dementia. As Edie’s mind begins to unravel, their son, Stephen hires a young woman, who is a stranger to the couple, to live in their house and help look after Edie. The play is a testament to life-long love and the ever-changing nature of relationships. As Edie says in the play: “You look at a wedding photograph, it looks like the end of a story. I suppose that’s the books we read when we’re babies. But it’s not an ending, is it?”

I’ve now lived for 70 years so I have more life experience than I had when I was last acting which means I have that much more to draw on.

“It’s quite an emotional part,” says Robin. “I’ve now lived for 70 years so I have more life experience than I had when I was last acting which means I have that much more to draw on. That is quite painful but it’s also quite fruitful.

“I lost my wife two or three years ago and this play is really about is a man who is facing the possibility, with his wife in the first stages of dementia, that they may not be together for much longer, and the anticipation of that loss is something which he doesn’t want to contemplate so he holds it at arm’s length as much as he can, but in another way he’s forced to come to terms with it. I find I have things I can draw on then. Actors are all magpies. We use our own experience to try and find the truth of what we’re trying to express”.

Before going into rehearsals Robin met up with playwright, Barney Norris to find out more about the background to the writing of his character. “If I’m directing a show or if I’m going to be in a new show its lovely to talk to the playwright so you can ask them: ‘Why did you write this line?’” he says.

“As I director that’s what I used to call my stupid question session, I would say, ‘Look this may seem crazy but why is he calling her Betty when her name is Beryl?’ and they’d say, ‘Oh that’s a misprint!’ or ‘Well you see, the reason for that is…’”

Norris’ work has been compared to the late writer, David Storey, whose play Home began Robin’s long-standing relationship with Oldham’s Coliseum Theatre. “I had a phone call from my agent saying they’d just had an enquiry from a theatre for me to direct Home by David Storey and I said: ‘Say yes! Where is it and who’s asking?’ – in that order,” he recalls. “It’s a play I’ve always loved and to be offered a beautiful play right out of the blue was fantastic. It was Kevin Shaw from Oldham who had asked and that was the start of one of the happiest theatrical associations I’ve had in my life with any theatre”.

During his early career Robin spent more than a decade working alongside playwright Alan Ayckbourn at the Stephen Joseph Theatre in Scarborough. He joined the company in 1976 as an actor, where he appeared in the original production of more Ayckbourn plays than any other actor. His later TV acting includes appearances in Only Fools and Horses, Casualty and The Secret Diary of Adrian Mole.

In 1979 Robin was appointed Associate Director of the Stephen Joseph Theatre and later Artistic Director from 1986 to 1988. It was during this time he commissioned and directed Stephen Mallatratt’s phenomenally successful adaptation of The Woman in Black, which has enjoyed 12 national tours and which Robin recently recast in the West End, where it has been a favourite for 30 years.

“You sort of fall into a pattern and so people tend to think of you as a director, and I have to say my career has gone very much that way,” Robin explains. “In this business no matter what you’re doing its always lovely to be asked, so when Chris [Lawson, Coliseum Acting Artistic Director] asked me if I’d like to play Arthur in Visitors I was really flattered. I thought the play was fantastic, so it was a no brainer really.

“It’s been fascinating getting back into acting but to a large extent it just means that my respect for actors goes up and up. They’re the most important people in the theatre because they’re the people you pay to see. As a director I always feel, how can I help them to be their best? – that’s really what it’s about. The whole theatre is there to support the actors because they’re the people who when the whistle blows go over the top, you know, and it takes quite a lot of courage as I’m discovering”.

Hopefully, Robin’s run at the Coliseum will feel more like a warm hug than trench warfare. And if you see him in the bar afterwards and are curious about an aspect of the show, remember there are no stupid questions.

“I remember when I was at school and we were doing King Lear first year A-Level and I thought ‘Who’s fighting who at the end?’ but I thought I can’t ask that question because I’ll appear so stupid, so I didn’t. As I got older I realised it is quite a tricky question, but I never dared to ask it, so I try and put that right,” Robin adds.

“It’s one of my mantles: there is no such thing as a stupid question or any time too late in the process to ask it – that applies to actors, directors, stage managers, anyone – because plays are a mystery, you have to ask.”

Robin Herford is in Visitors at Oldham Coliseum Theatre from Thursday 18 April – Saturday 4 May 2019. 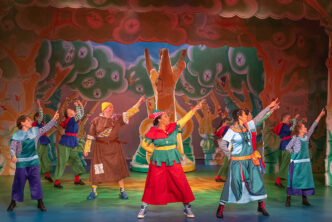 Written by Carmel Thomason
Add comment
Norah Lopez Holden gives a gut punch as Jill in Equus
FacebookTwitterPinterestWhatsApp
‘Cancer does not make you look at death but at the life you are living,’ Zoë Law