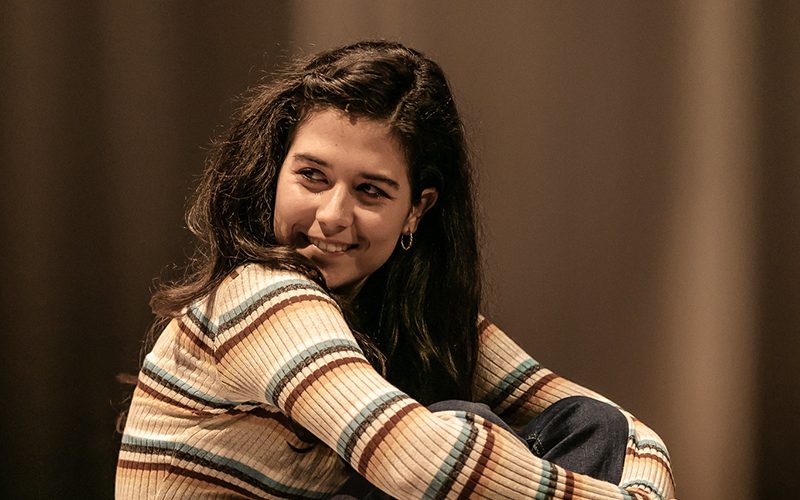 What’s the play about?

The play is about a paediatric psychiatrist who, in a pivotal and conflicting point in his career and life, is given a young 17-year-old boy to treat who has been involved in an incident where he blinded six horses. By uncovering the events of that incident, we discover what led 17-year-old Alan to inflict such an act of cruelty – he comes to realise the battles and revelations about his own life and of human beings in general.

Were you familiar with the story before you auditioned for the part?

I’d seen a rather dry production of it I remember when I was in school – all I seem to remember was that two people got naked in it – which probably means that particular production wasn’t that engaging! – I hope people take more away from this one!

Who is your character Jill Mason in Equus?

Jill is a young woman who works at the stables. She meets Alan and has a big and unfortunate part to play in the incident – which you come to discover as the events of the play unfold! – I don’t want to give too much away…

I knew that if there was a politically minded director who would encourage those conversations and address those issues with care and sensitivity, it was Ned

What attracted you to this role?

I think it’s always, sadly, a rarity to read a young female part who has a lot of agency and drive within a scene, especially in an old classic play. Jill, however, has this in abundance! So initially – when I read her scenes that’s what I was enthusiastic about – a smart young woman who has no trouble speaking her mind.

Both her and Alan are at that pivotal point of adolescence where you start to work out who you are emotionally and sexually – I found these aspects of the play really fascinating. I will say, some of the writing does feel slightly dated in regards to the gender troupes, which was a concern of mine when auditioning. Thankfully we’ve made some headway since the 1970’s!

I knew that if there was a politically minded director who would encourage those conversations and address those issues with care and sensitivity, it was Ned [Bennett]. Having seen a couple of shows he’d directed I was really excited at the prospect to take on this mad play with him at the helm.

You also play a horse. How is the symbolism played out?

I think that’s a really brilliant part of our production… the horses are played by humans – without masks like in most productions – just through physicality. I just think it’s much more powerful to watch an actor transform in front of your eyes, and also it really helps us in the company feel like an ensemble and that we’re part of the wider storytelling – you have a big emotional scene one minute, then you’re sticking your leg out as a horse the next – you haven’t really got time to think about it.

But also I think in this production, what is really effective about having the cast play horses is that you see them through Alan’s eyes. They represent so much more than animals to him, and with the physicality of human bodies you have much more room to create that provocation in the audience – as Alan sees them – compared to if we just projected pictures of sad looking horses for example.

What relevance do you think the play has for a modern audience?

I think it’s always important to examine all aspects of mental health. Like I’ve said we’ve come a long way since the play was first written as it no longer feels like a huge taboo. It feel like we’re in a progressive time where people are recognising that we need to talk about our mental health more openly in order to eliminate judgemental preconceptions about therapy, for example.

Especially in young people – in that respect it is incredibly valuable – because it opens up that conversation. Also, what I think is really cool about the production, is that it speaks to a young audience, as Ned said in one of our first rehearsals “It’s sort of like watching a Netflix true crime series” because all the information and evidence pans out piece by piece. So before you know it you’re hooked and like Dysart trying to work out what could have led this boy to do it and battle with who is ‘to blame’ for it.

Has anything surprised you about the audience’s reaction?

Yeah actually! – I think we anticipated that the production itself would probably polarise people a lot more – the classicists for example who came expecting a certain type of production because they know it or have studied it because what we were rehearsing was an inventive re-imagining of the play. Ned and the whole team were very keen to create something that felt fresh and affecting that spoke to an audience of today. So we though that might ruffle a few feathers in with people who just wanted to see a version that had already been – but in fact the general response has been really positive from audiences of a variety of ages.

What do you hope audiences will take from the show?

This is a play that makes you examine yourself and your own relationship to passion in comparison to what society deems as ‘the norm’. Hopefully it makes you question your opinions on physiology and parenting and sexuality. But also, personally, I want audiences to feel quite haunted by it – like they’ve taken a gut punch to the stomach after the lights go down at the end – because the best theatre, in my opinion, is always the most affecting! But maybe I’m just a bit of a sadist…

Equus is at The Lowry from 23 –27 April 2019. Visit English Touring Theatre’s website for full tour details.

Read our interview with Woman in Black director, Robin Herford on returning to acting in Visitors at Oldham Coliseum.