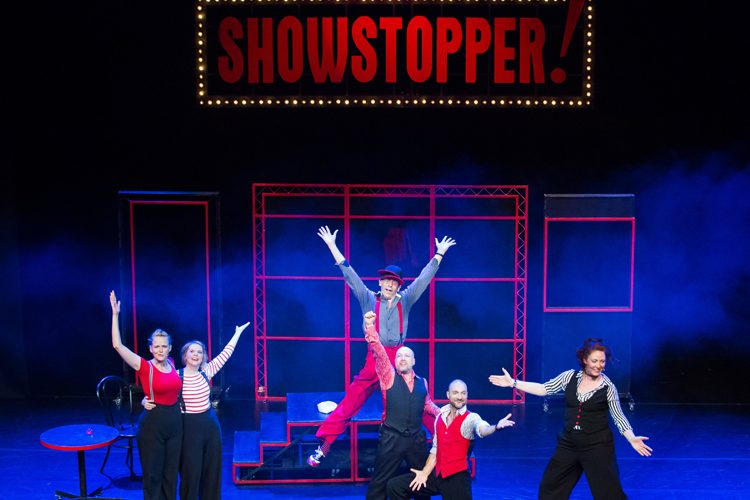 Dylan Emery co-founder of Showstopper! The Improvised Musical shares the secrets behind his unique blend of musical comedy improv

‘A bunch of clowns trying to do the impossible,’ is how Dylan Emery describes Showstopper! The Improvised Musical. It’s an insanely ambitious show he co-founded with Adam Megiddo in 2008, and soon became a must-see staple of the Edinburgh Fringe. More than 1000 shows, a BBC Radio 4 series and a host of awards later, the comedy impro genius is back on the road with more Showstoppers coming to The Lowry in January 2020. He chats to Carmel Thomason.

Showstoppers won the award for Best Entertainment and Family at the 2016 Olivier Awards. Who is it aimed at?

It’s aimed at people who like comedy – because trying to improvise a musical is a ridiculous idea; and at lovers of musicals, because we genuinely try to create a show that would stand toe-to-toe with anything in the West End. In terms of ages, we suggest anyone from 12 upwards will have a great time.

The show is billed as an improvised musical. That sounds very ambitious – how does it work?

It is insanely ambitious – and that is part of the joy of it. The shows starts with a writer of musicals, who gets a call from their producer – they need a new musical, now! Then the writer turns to the audience and says, ‘I need your help’. The audience then supplies the setting, some of the musical styles and the name of the show. Then the Showstoppers do the rest, creating characters, an epic storyline, songs, dance routines, everything that you would see in a big show!

Where did you first get the idea to do a show like this?

We were working with the late, great Ken Campbell on an improvised Shakespeare show called The School of Night. We started working on improvising songs in different styles of music. Then one day for a Halloween special, Ken told us that the second half of the show would basically be a musical. He threw us in at the deep end and it could have gone completely wrong – but instead it was really remarkable. Following that show, Adam Meggido and myself decided to develop a standalone improvised musical.

What does it take to be a good improv artist?

For the kind of improv that we do, you have to be able to pay close attention to what everyone else is doing and understand it, uncynically embrace whatever they have created, and then add your own ideas with 100% commitment. They are the essentials. For our show, you also have to know your musicals inside out, be able to direct yourself on stage, be a great writer of dialogue, be able to create characters on the fly, understand narrative, etc.

How did you get started in the business?

Most of the Showstoppers are trained actors, musicians and comic performers. I’m a bit different because I started out as a financial journalist working in London, doing improvised comedy on the side. Until I met Ken Campbell, then it all became a lot more high-profile.

Has the structure of Showstopper changed since you first started it in 2008 and if so how has it changed?

Nothing massive has changed since we started either in terms of who is in the company, who runs it and the show itself. The only big difference to the show – and it’s not obvious unless you’ve seen the show a lot – is that when we started we tried out fairly rigid structures to the stories we told. However, as we have got better and better at doing the show, we’ve relaxed almost all the structures we used to hold on to. So now, more than ever we are flying by the seat of our pants.

What do you do with the cast to prepare – do you have rehearsals?

Yes, we rehearse an awful lot – although we don’t usually call it rehearsal but practice. We’re more like a sports team, with lots of skills but no idea what the match will be like on the day itself.

Do you have a live band?

Yes – we usually have a keyboard player, a percussionist, a reeds player (clarinet and saxophone) plus sometimes a guitar.

Are the songs new every night? Where does the inspiration come from?

Yes – everything is new every night. The inspiration comes from two places – firstly, the story for that night. So, if the audience suggests the musical is set on the Titanic and the captain is having a scene about how isn’t afraid of the sea – when that turns into a song, that will inspire the musicians in terms of style and mood and emotion – and the music will in turn inspire the singer to create certain types of lyrics.

The second inspiration comes from the fact that we ask the audience to suggest musical styles for some of the songs – so if someone is singing in the style of Phantom of the Opera then it will push them in very different places to The Sound of Music.

How do you take suggestions from the audience and how do you decide whose idea to run with?

We ask the audience for suggestions for the setting and the title of the show and then get the audience to vote by cheering. The loudest cheer wins!

What is the strangest suggestion you’ve had, and did you go with it?

Because the audience votes on which setting we go for, most of the truly bizarre ones are filtered out. Still, we had one show set inside someone’s head, which was a challenge…

Do you have a favourite musical you’ve created for Showstopper, or any you would consider developing into a stand-alone show?

We’ve done close to 1,000 shows so it’s impossible to name one favourite. But there are quite a few that we think would provide the basis for a great written musical. But so far, when it comes down to it, it’s more fun to make up another one than write one down…

What is your favourite musical?

Very hard question. I’m currently listening to Waitress on a loop, which has stunning songs and a lovely story. Hamilton is non-stop audio-visual assault – it’s amazing. But then what about the gothic majesty of Sweeney Todd? The incredible catchy and emotional Les Mis? Sorry – there can’t be one!

You’ve now played Showstopper in 12 countries. Why do you think it has such an appeal across different communities and cultures?

Well, we’ve only ever performed in English – luckily there are lots of countries in the world where the theatre-going public speak good English. One advantage our show has is that you don’t have to be absolutely fluent in English. Musicals are based around big emotions, great visuals, dance, big songs; they are mostly not about clever language or cultural references, which would limit where we take the show. But also, at heart we are a bunch of clowns trying to do the impossible – and basic dynamic is recognisable in every culture.

Showstopper! The Improvised Musical is at The Lowry Theatre, Salford Quays on 16 and 17 January 2020. Visit website for details.