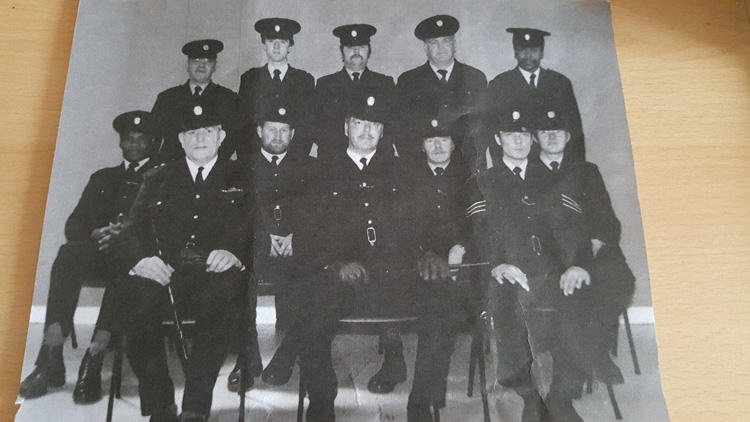 It’s almost 60 years since Ernie Thompson joined the newly established Smithfield Market Police Force, in what is now Manchester’s Northern Quarter. Known as the ‘baby of the force’ he was 24-years-old and the only recruit with no previous police training.

When he retired 30 years later, in 1992, Ernie was the force’s Chief Inspector, a job he held for 16 years. Now his personal memorabilia from that time, including his Market Police Badge, diary and pocket book, has been curated in a new exhibition at The Greater Manchester Police Museum on Newton Street.

Ernie and his wife Sheila, who now live in the Canary Islands, returned to the city for the official opening where Ernie was presented with a unique award from the High Sheriff, Dr Robina Shah in recognition of his contribution to the people of Manchester.

He tells Quays Life about his life on the beat.

What was it like to be the youngest police recruit at the time?
The 20 constables who were selected for the force were instructed to attend the new police office in Swan Street a week before the start date 29 Jan 1962. We were all told to arrive in uniform to meet our senior officers and get to know one another.

Our Chief Inspector was Mr Hargreaves. He was former Deputy Chief Constable of Stockport. Mr Smith was our Inspector and was fomer Sergeant from the Manchester City Police (known as the ‘City Police’), and our two Sergeants, Brown and Mossie, were ormer Sergeants also from the City Police).

We lined-up and our uniforms were checked, and we were inspected by members of the Manchester City Council. I was the youngest recruit and was referred to as ‘the baby of the force’. I was the only member of the force who didn’t have previous police training, although I had been working before that as railway signal man.

We were given rotas and maps of our beats and market by-laws. I was given books to study on powers of arrest etc. At this time, I was very excited and determined to succeed and to prove myself in the shortest possible time. This I did. I became Sergeant in 1966, I made 643 arrests over my 30 years, and received commendations from the City Police and Manchester City Council. The cells at Newton Street Police Station (now the Police Museum) is where the people I arrested were held.

What was Smithfield Market like at that time?
It was a very busy area, there were six acres of covered stalls including the wholesale and retail fish market buildings. Whilst most were open stalls, some of the stalls were set in old buildings surrounding the perimeter of the market. The streets and roads were cobbled and there were 7 public houses in total, one of them situated within the market itself. There were three cafes, all open very early in the morning, but the market was open for deliveries 24 hours a day, a lorry would be dropping off goods at the stalls and pavements day and night. Porters and stall holders would arrive early morning followed by shop keepers a bit later. Swan Street and the market would get totally congested and we would be on traffic duty two hours on and two hours off.

What memorabilia have you donated?
One of my police pockets note books, one of my Police Association Diaries, all my commendations from the City Police and City Council – I had 14 of those! Pictures of myself and my men, correspondence from the courts, details of my involvement with the Arndale Centre opening by HRH Princess Anne. Some of this has been used in the desk display and the rest has been archived for possible use by researchers in the future. The Police Museum Curator, Katie Henderson told me that TV production companies sometimes contact the Museum looking for specific memorabilia from a specific era. I am just so delighted that it is of use to future generations and Smithfield Market’s history has not been lost in the annals of time.

One of the exhibits recreates your old desk – what did it feel like to see it again?
When I was promoted to Police Inspector I moved into the office and had a desk. Constables and Sergeants did not have a desk but used the end of a large wooden table in the canteen, there were lockers for their confidential papers and personal items.

I was amazed when I saw the exhibit, the students had recreated my desk! Even along with my ashtray and packet of Park Drive cigarettes. The students from Manchester University who helped research the exhibition did a fantastic job! They are wonderful young people. To be awarded a certificate from the High Sheriff of Greater Manchester – I was overwhelmed by everyone’s kindness.

What did you enjoy about being a Police Inspector?
As a young Inspector I was concerned some of my older colleagues might have felt some resentment to me. I was able to work through this quite quickly because our duties increased widely and rapidly to cover markets across other parts of Manchester and to cover an abattoir too!

In 1973 I moved to the new site of New Smithfield Market in Openshaw to oversee the move there from Manchester City Centre. I enjoyed my time as Inspector and Chief Inspector, but loved my time at the old Smithfield Market. I was over-joyed to see the Police Museum, it brought back so many memories.

Was your life ever threatened as part of the job?
Yes, and it was one of the stalls that saved me. I had apprehended someone, and I had to wrestle a knife from his hand, he tried to stab me in the heart, but the knife stuck in my Police Notebook, it gave me time to roll under the stall where he couldn’t reach me, and I could blow my whistle and alert my colleagues. In the early days we had no radios and of course no mobile phones! I still have the scars on my hand and arm.

Do you watch any TV detective shows?
I couldn’t watch the TV series Morse without seeing the late John Thaw as the cheeky young barrow boy I knew growing up in Manchester.

I like true crime books and I am interested in the lives of Native American Indians in the Wild West days.

What are you doing in your retirement?
When I was 65, I was diagnosed with cancer and during my treatment my sister bought me a canvas and some paints as I had said for many years I would like to paint. My wife, Sheila and I went to Fuerteventura for me to recuperate and we bought a house there and I love painting there. I have had quite a few exhibitions both here and in Fuerteventura and continue to do so. We live most of the time in Fuerteventura now. I love painting scenes and people’s pets.

The Greater Manchester Police Museum is in Manchester’s Northern Quarter at 57a Newton Street, inside a Victorian Police Station. It is open Tuesdays from 10.30am – 3.30pm and on Thursday’s during school holidays.