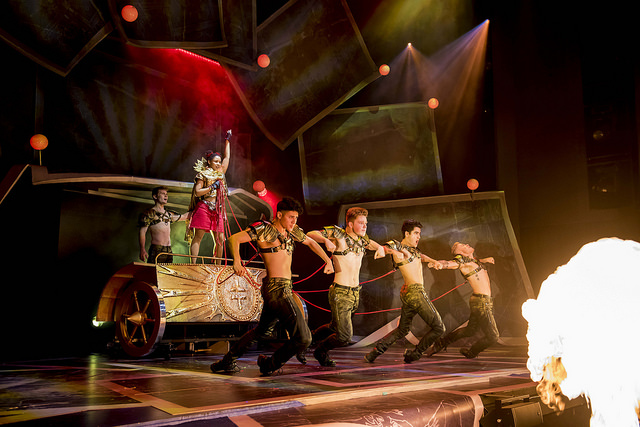 Carmel Thomason7 min readJanuary 14, 2019
Home » People » Life is a whirlwind for the young female cast of Take That musical The Band

A year on tour has done nothing to diminish the enthusiasm of The Band’s younger female cast. If anything, the excitement of being in the show that has, at its heart, the music of Take That, has been ratcheted up, aided by stellar reviews and audience adulation. Vicky Edwards finds out more…

Telling the story of a group of friends and fellow fans, the cast of The Band is also a tight-knit group. The ‘more mature’ members of the cast look out for the younger boys and girls of the company, while writer Tim Firth and Take That frontman and one of the show’s producers Gary Barlow have known each other since childhood. Then of course there are Gary’s fellow producers: Robbie, Mark and Howard, who you could also say go back a bit.

Top it off with the five boys found on Let it Shine, the Saturday night telly talent show especially for The Band, plus established producing duo David Pugh and Dafydd Rogers, and one way or another friendship is the universal thread that binds the project together, which is perhaps part of its success. Certainly the team effort, shared laughter and warmth are palpable from the moment I join Faye (Rachel), Katy (Heather), Rachelle (Debbie), Sarah Kate (Claire) and Lauren (Zoe).

“It is incredible,” agrees Katy. “People have a cracking night out and make new friends. We also see these amazingly dedicated fans who go from venue to venue. They come to stage door and tell us how much that the characters resonate with them.”

“People really do find friends when they come to this show and I find that really sweet,” adds Faye, as Rachelle grins and admits that as this is her first professional job it is going to be a pretty tough act to follow.

“I feel so lucky! It’s a great script, we’ve got great audiences and it is a great cast,” she enthuses. “These guys are like my big sisters; we are a unified group and I do think that transfers to the audience.”

Directed by Kim Gavin and Jack Ryder, the story follows five girls who grow up with a boyband in 1992. For the friends, ‘the band’ is everything. Reunited 25 years on, they once again set out to fulfil their dream of meeting their heroes. Including the music of Take That, but not about the world-famous boy band, the girls reminisce back to the start of the tour.

“It has just been a whirlwind!” Wide-eyed at the memory Sarah Kate describes the ‘relentless excitement’ of the run-up to opening the show in Manchester. “Every place we go to gains a bit of momentum, but I can remember the first time so intensely.”

“Before then we felt a combination of sick with nerves and great pride in the show,” Katy chips in. “For it to finally be put in front of an audience was just so exciting. The great thing is that the buzz is still there; the butterflies are still there every opening night.”

“When we played Llandudno a woman stopped me in the car park and asked if she could hug me. She said that my story in the show had happened to her and her friends and she really related to it,” says Rachelle, as Faye nods in agreement and jumps in:

“When people that come up and say ‘you played me’ it feels like a real responsibility, but it’s wonderful to know that they relate to the story and that we tell it well.”

“It is a show that seems to affect and reunite people. It makes people nostalgic for the friendships and ties they had at school,” Sarah Kate voices her thoughts while signing a programme for my daughter, who at twelve doesn’t really know much Take That but adored the show anyway.

But it seems that no matter how much the show publicity explains that it is not the story of Take That, people are still surprised; ‘I wasn’t expecting that!’ being the most familiar refrain.

“It’s an emotional story and it’s definitely not a jukebox musical,” says Katy emphatically, “but nostalgia is a big part of it because people have songs that are part of the soundtrack to their lives.”

“The songs are used to emote the story, not to advance it,” suggests Lauren.

“But everyone gets right into it, twinkles Faye. “Dance moves – the lot! In Pray and Relight My Fire people really join in.”

Of course no show can run this long without encountering the occasional problem, but as they top each other’s stories of costume malfunctions (if you see the show and an actor appears to be waggling their tongue at someone else then you’re witnessing code for ‘costume cock-up – check yourself!), technical bloopers, ghost sightings and almost-falling-off-the-stage dramas, it is clear that the girls are having a ball. Apart from their families, is there, I wonder, anything they miss?

“I always check to see where the closest Pret is to the theatre otherwise I miss my crayfish and avocado sandwiches,” says Sarah Kate.

For Faye it’s all about home comforts. “Sometimes I just miss sitting on a couch,” she muses.

“And if the Wi-Fi in the digs isn’t very good then I can’t catch up on Neighbours,” wails Katy.

“At home I have a huge bear called Teddy. He’s too big to tour and so I miss him,” sighs Rachelle.

“A guaranteed decent shower! The one I’m in now feels like I’m being whipped,” grumbles Lauren.

It is all pretty down to earth stuff, but that’s who they are: down-to-earth girls who just happen to be supremely talented and who have been entrusted with a wonderful story to tell.

With Manchester being home turf for Lauren, Katy and Sarah, the girls are especially looking forward to Salford.

“I have very vivid memories of being around three-years-old and watching Alice in Wonderland in Manchester. They looked so pretty and I wanted to do what they did so much,” Katy smiles at the memory of her toddler self. “Getting to open in Manchester was incredible; I can’t put it into words. All the years of training, the endless lifts my parents gave me to classes – it all paid off. To have my family there and for them to hear that insane response was just amazing. Salford will be the same,” she says, a mile-wide smile revealing how significant support on home turf is to her.

As I wend my way home after the evening performance I do so a full heart, having been reminded what – and who – truly matters. I’ve shed a few tears, but I have also sung myself hoarse and laughed myself silly. Thanks, girls. I’ll definitely Take That.

The Band Musical is at The Lowry, Salford Quays from 16-26 January 2019 and on tour until March 2019. For full tour details visit www.thebandmusical.com