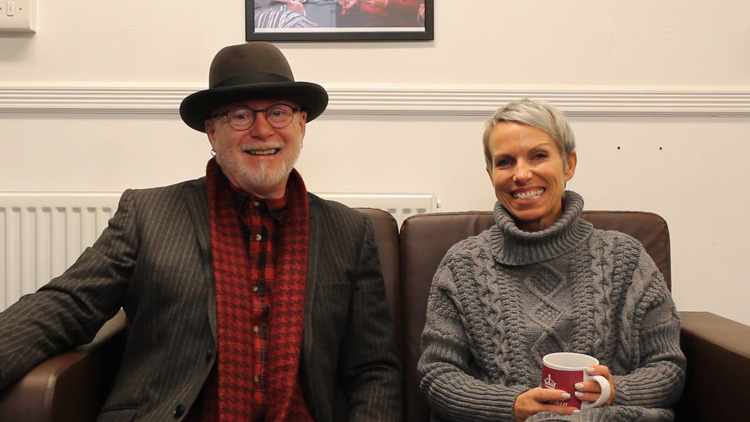 The north west’s favourite pantomime dame, Fine Time Fontayne returns for his 11th Christmas season at Oldham Coliseum. And this year he’s joined by another of the theatre’s much-loved faces, Sue Devaney as the Wicked Stepmother. Taking a break from rehearsals they talk to Quays Life about comedy, tradition and things going wrong.

When it comes to feelgood, family pantomime, it’s hard to beat Oldham Coliseum’s Christmas show. In large part that’s down to Fine Time Fontayne, who has been both the co-writer along with the theatre’s artistic director, Kevin Shaw for 11 years.

He’s played the pantomime dame for almost as many years. Having missed only one run in that time, after breaking his ankle during rehearsals in 2016.

Last year Fine Time returned with a blast, bounding onto the stage dressed as a tower of doughnuts, propped up by bright yellow Dr Marten boots. ‘I’m back!’ he said, to huge applause. For many his crazy costumes and upbeat, family-friendly banter have become a Christmas tonic not to be missed. But what keeps this Yorkshire man coming back across the Pennines?

“Playing the dame gives me the opportunity to go on a journey on stage that normally I wouldn’t get,” explains Fine Time, who this summer played Duncan in Macbeth at the Shakespeare’s Rose Theatre in York. “I’m called Fine Time but basically, I’m a straight actor (I make my living acting). Being a dame places you in a position where you can be funny, you can be relaxed, and take risks.

“Having the opportunity to be a dame in the same place for years, like I have, you’re afforded the luxury that the audience are warm before you arrive. It allows you to relax and if you relax it’ll work, and you’ll be funny. When people know you, they like it when something goes wrong, such as the set falling over, and you can be in the moment with them and accept whatever happens.

“It’s a funny kind of stardom. There are no stars in repertory panto, but because the audience know you they like to see you. There’s a sense of ownership the audience has got to have. It’s Oldham’s pantomime and they are inviting us in and they love it when we turn up”.

While Fine Time brings his own history to the stage, he’s also conscious when creating the Christmas show pantomime’s traditional roots, dating back to the middle ages, taking on board the traditions of the Italian Commedia Dell Arte, the ancient Roman Saturnalia Midwinter Feast, the Italian Night Scenes and British Music Hall.

“If you watch Charlie Chaplain and Keystone Kops the routines are straight from the English pantomime,” he explains.

As well as the children’s fairy story, pop songs and nods to the latest trends (last year was Amazon Alexa), Fine Time makes sure his shows have all the traditional elements pantomimes have become famous for: specific stage entrances for the Villain (stage left) and Good Fairy (stage right), a middle-aged man dressed as a woman (Pantomime Dame), a young woman playing the male lead (Principle Boy), a Ghost scene and an ear-splitting “It’s Behind You!” (oh no it isn’t, oh yes it is!).

This year, Oldham’s pantomime is Cinderella, the rags to riches tale about a girl, a glass slipper and a handsome prince. And Fine Time is playing one of the Ugly Sisters, which means there’s not just one dame this year, but two.

The other Ugly Sister is Simeon Trueby, another regular face on the Coliseum stage and the actor who stepped in to save the day as dame when Fine Time had to suddenly drop out.

“I’ve known Simeon for six years now, but we don’t know each other as a double-act and we’re learning how that translates into two of us,” he adds. “We can’t both talk at the same time and as the audience responds we need to bring them along together. That’s starting to happen and I’m really looking forward to that”.

Adding to the familiar warmth of regular faces, Richard J Fletcher returns as the comedy side-kick, playing Buttons. And Sue Devaney, whose TV credits include Dinner Ladies and Coronation Street, joins the venue’s pantomime for the fourth time.

“I play the Wicked Stepmother, or to use her full title: Countess Viella Dipstick Squeezy Pocket the 31st,” laughs Sue. “She’s very cruel. She loves money and power and men. She wants her girls to be wealthy and marry a prince so she can be kept in a lifestyle she thinks she’s accustomed to. She’s very manipulative if she wants something she’ll try every which way to get it. She flirts and she hurts!

“I always love playing the villain because you bring the wicked side of yourself out that you can never do when you’re in Aldi shopping. I can get a real buzz out of playing naughty – just on stage, obviously. Oldham audiences tell you when you’re not being good!”

Watch the video to hear Fine Time and Sue share back-stage secrets and advice on writing and creating a family Christmas show, as well as more insights into their history with the Oldham Coliseum pantomime.