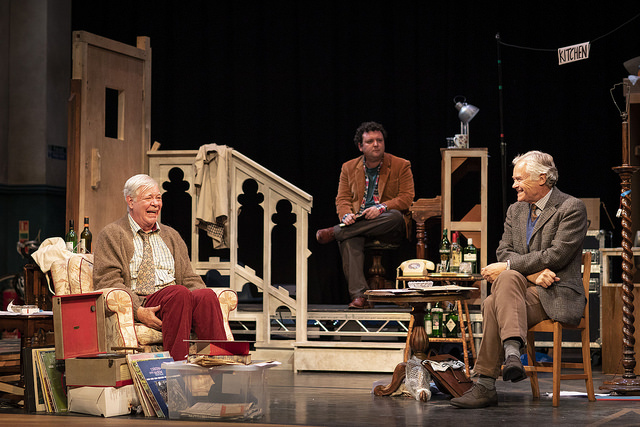 Director, Philip Franks talks about bringing the first revival of Alan Bennett’s 2009 play, Habit of Art to the stage.

How did you get involved with this project?
Through Alistair Whatley and Tom Hackney who are Original Theatre. I was in a play for them – Flare Path – a few years back and had a very good time. Relationships with producers are tricky things, it’s not always a smooth ride. But they seem genuinely to be a company interested in doing plays because they think the plays are good not necessarily doing something because it’s the stepping stone to the next money-making enterprise. There’s a passion and a proper interest in drama, particularly in taking shows round the country.

Do you like touring?
I’ve always liked touring, never minded it. Some actors baulk slightly and say ‘no’ to touring. I never have, I’ve always enjoyed it. It’s a way of seeing your country and of playing to very bright and receptive audiences. Quite often in the West End you are not. They are tourists who’ve come to see the show because it’s been recommended by the concierge of their hotel. Whereas in what are slightly patronisingly called the regions they come because they want to and also they can afford it as prices are not so hideous as they are in London.

Have you done Alan Bennett plays before?
I’ve played Hector in The History Boys a few years back. Matthew (Kelly) is also a previous Hector – better casting than me I think. But I enjoyed doing it. I directed Kafka’s Dick for Nottingham Playhouse some while ago and I saw David Yelland, who is playing Britten, in a Bennett play, being brilliant as Anthony Blunt.

Has the play changed for this new tour?
I wasn’t quite sure about The Habit of Art when I read it because it’s very specific to the National Theatre, where it was first staged. I said upfront if Alan will accept a cut then I’ll do it but if not I think it belongs to where it was first done. But he did accept the cut and we will set it in a rehearsal room in whatever theatre we happen to be. It also means we have slimmed the cast down and taken out specific references to the National Theatre and hopefully it has made it a bit more universal.

How is The Habit of Art structured?
It is a play within a play in which actors are doing a run-through of a play about poet W.H. Auden and composer Benjamin Britten. So you have the life of the actors and the company and also the life of these two extraordinary men and their biographer. Both plays, as it were, comment on the other. It allows you to take a serious subject and make it extremely funny because Alan Bennett is witty to the marrow of his bones. He can’t not be funny. But he’s also a very humane, compassionate and serious writer and you get all of those in this play, and it’s a very moving play I think.

Does it matter if audiences don’t know much about Auden and Britten?
No, all you need to know is given you in the play. Bennett is very good at imparting his information, you don’t need to have a degree in 20th century music or 20th century poetry to see it. It’s a play about old friends who’ve fallen out and how their work affects their lives and how their friendship has broken. It’s whether it can be rekindled, what work means to them and what their flaws or peculiarities of their private lives mean in relation to their work. And we can all understand that, that’s about all of us.

How did the casting come about?
I worked with casting director Joyce Nettles. I was in a play with David Yelland at the time this was mooted and thought, ‘gosh, I can’t think of anyone better to play Britten than you’. Then Joyce said she had a brilliant idea for W H Auden. She suggested Matthew Kelly who has previous with Alan Bennett and was a great friend of Richard Griffiths as well. The marvellous thing about Matthew is that he has the most enormous warmth and accessibility. If you’re frightened that you were going to see a dry play about a difficult poet you know you’re not because you’re seeing Matthew who is the most available, inviting and accessible of actors. In a way Bennett has written, as so many writers like Beckett or Stoppard, a great double act in the play and they have to be completely complementary. It’s like Falstaff and Hal or Morecambe and Wise. You have one who is being splashy and emotional, and one who is being more contained and intellectual. That’s the balance you have to get when you’re thinking about casting and that’s very much the balance I think I’ve got. In the middle of it you have this little rubber ball who is bounced from one to the other – that’s biographer Humphrey Carpenter, another real person. He is treated appallingly badly by both Auden and Britten and in the play the actor who plays him is also treated badly by pretty much everybody.

Tell us about your Yorkshire connections?
I’ve worked all over the place in the theatre but Yorkshire is my televisual home, my home really for the whole of the 1990s. I started with Darling Buds of May and ended with Heartbeat. That was three years in one case and four years in the other. In between I was doing Countdown. I have worked a great deal in Yorkshire, living in Leeds in a variety of flats and hotels on the Moors.

Do people still recognise you as Catherine Zeta Jones’ boyfriend in Darling Buds?
Yes. It depends how many taxis I’ve taken. Taxi drivers are the kings of recognition. You’d think it was such a long time ago that no one will think this wizened old skeleton that’s peering at them in the rear view mirror is the fresh-faced tax inspector from The Darling Buds of May – but they sometimes recognise the voice.

Why did you move from acting to directing?
A lot of actors reach a point in their lives when they perhaps need to take a bit more responsibility. You do as an actor spend an awful lot of times being told what to do and then sitting around waiting to do it. And I was very, absolutely blessed to work at Greenwich Theatre with Francis Matthews who pushed me into making a decision. He said don’t sit around moaning, try it and he gave me a production there which was a risk as I’d never done it before but it went well. I thought I’d got it out of my system but then he gave me another one. The second puff of the cigarette as it were. But I don’t want to give up acting because I enjoy it very much but directing you certainly know you are at full stretch.

Do you enjoy directing?
Yes, but there are bad bits. The five minutes before you go into the rehearsal room in the morning is usually terrifying. How am I going to do it? Am I going to have anything to say, to inspire people? It’s not to do with pushing people around and telling them what to do, but creating an atmosphere inside the room where people can be at their best. You have to have the answer to questions even if the answer is ‘I don’t know, let’s try X and Y and see which is better’. It’s not to do with pushing puppets around but the buck does stop with you. Then there’s a weird bit after it’s opened. Once rehearsals get going it’s all fine and then I love a tech when you are making the show happen. I find it quite difficult after a show opens to know how to come back to it. Some directors are very hands on, they never leave it around, I don’t like that.

Hear what Matthew Kelly has to say about the play: 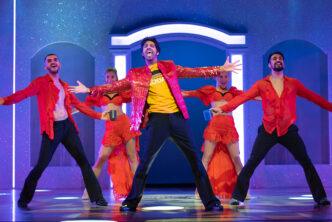