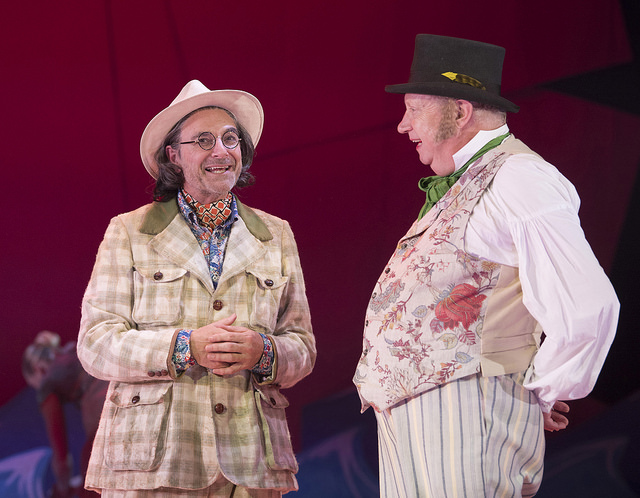 For many of us Brian Capron will always be ‘Norman Bates with a briefcase.’ Famously one of Coronation Street’s most murderous villains, as Richard Hillman he definitely came under the heading of mad, bad and dangerous to know. But his latest project is a million miles away from such dastardly deeds and Brian is thrilled to be joining the cast of the 50th anniversary revival of the family-favourite musical Doctor Dolittle.

“It is charming, uplifting and relevant to today because, without hitting people over the head with it, the message about animal welfare and protecting the environment will really resonate with people,” Brian, enthuses during a break in rehearsals.

“The whole show has been streamlined and has even got three brand new songs that Leslie Bricusse has written especially,” he says, telling me that Hollywood royalty Bricusse has been frequenting the rehearsal room to keep an eye on things. As well he might. After all, he has been involved in Doctor Dolittle since 1967.

Based on the books by Hugh Lofting, who wrote the first of several Dolittle stories one-hundred years ago, the first story was penned in the trenches during WW1. The 1960s movie starred Rex Harrison as the eponymous Doctor and was nominated for nine Oscars, winning two, including Best Original Song for Bricusse’s Talk to the Animals. A UK stage adaptation starring Phillip Schofield premiered in 1998, followed by a US production in 2005. A story that has endured and continues to reach new audiences, in this new production double Academy Award-winner Leslie Bricusse has written the book, music and lyrics. Directed by Christopher Renshaw, Brian is almost as in awe of the scale of the mammoth production as he is of the show’s tip-top creative team.

“It is a big show! We have got a Broadway chorographer and in the number I front called, ‘I’ve Never Seen Anything Like it in My Life’ there are 20dancers – it’s massive,” says Brian, looking impressed and terrified in equal measure.

“We’ve a great creative team and amazing musicians,” he adds, “and then there are the puppets! Think War Horse. The pushmi-pullyu is a double-headed llama that is eight feet high!

“In the first half I play Albert Blossom, a larger-than-life character who is the owner of a circus. He is a bit rough and blousy and I think he probably drinks a lot,” he chuckles, adding that, while in the film Richard Attenborough played Blossom as a Northerner, he is making him a cockney.

“When Doctor Dolittle approaches him, Blossom tells him where to go with his animal, until he sees the pushmi-pullyu! Then in the second half I play, Straight Arrow, who is Chief of an island and is so named because his dad wanted him to go ‘straight to Harrow’! It is a nice contrasting character so I won’t get bored,” he jokes.

Joined by a cast that includes Mark Williams (‘Mr Weasley’ of Harry Potter fame) in the title role and fellow ex-Corrie actress, Vicky Entwistle as the parrot, Polynesia, it is undoubtedly a tale of our times for all the family – and with no stinting on spectacle.

Telling of eccentric Doctor Dolittle and his quest to find the Giant Pink Sea Snail that holds the secret of life and makes the world a happier place, Doctor Dolittle teaches us not only to talk to the animals but to listen to them as well.

Brian is delighted to report that all aboard the good ship Dolittle are indeed a happy and friendly crew. Brian says: “It is such a lovely company. You don’t always get that, but it makes touring life so much easier.”

And what a tour it is! Running for a year, Brian and Mark have signed up for six months, committing to being ‘on the road’ until early May.

“I live in Hove on the South coast and I don’t really like working in the West End because you just get the train there and back every day and it’s like having a regular job. I like touring, but I’m fed up with staying in hotels, so sometimes I take my big six-berth motor home and find somewhere with electric hook-up.”

“And of course we have Christmas at the Lowry, which will be brilliant as we have a lot of friends from Coronation Street up there. My wife will come up as she made lots of friends on Corrie too, and I also did panto last year in Stockport and filmed, ‘Where the Heart Is’ in the North. Being anywhere up this way always feels familiar.”

No stranger to talking to the animals, keen rider Brian recalls growing up on a council estate near Heathrow Airport.

“A friend told me that if you offered to help out at the local stables you could get free rides. I used to muck out 21 horses on my own!”

But it was while presenting for This Morning that he got what he now describes as “the best job I ever had.” Dispatched to Borneo to track and report on the jungle’s orangutans, he quickly found himself falling in love with these beautiful apes.

“I learnt so much. They are amazing creatures; fascinating. Before then I would have said that I was very much a people person rather than an animal person, but that experience changed me. It made me realise what we are doing to these poor animals with palm oil and the destruction of their habitats. As I say, the production doesn’t bash you with the environmental message, but it is there.”

Time to return to rehearsals for his big song and dance number, Brian bids me farewell, but not before he tells me how chuffed he is to be involved in Doctor Dolittle.

“It is a very special show. I think people will be gobsmacked and I am honoured and proud to be part of it.”

Written by Carmel Thomason
Add comment
What does it take to be a 21st century slapstick comedian? We talk to Jon Bittman of Släpstick at Home, Manchester
FacebookTwitterPinterestWhatsApp
Mark Williams makes his musical debut in Doctor Dolittle at The Lowry