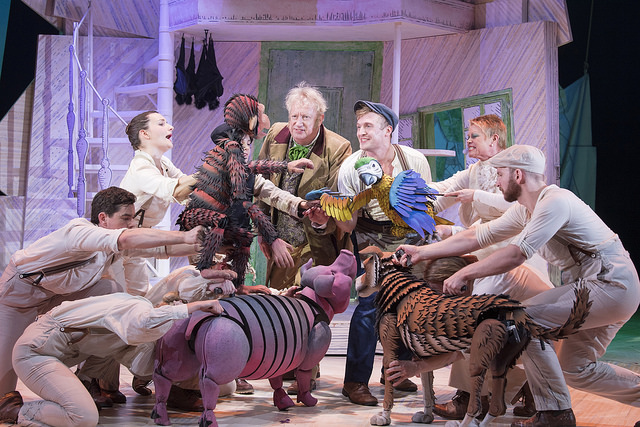 Mark Williams must have been off sick when the caution to ‘never work with children or animals’ was flagged up. From playing Mr Weasley in the Harry Potter films, which were teeming with kids, he has now signed up to do six months on the road with all manner of crazy creatures as Doctor Dolittle. Frying pan to fire? Not a bit of it.

“I have always wanted to do a musical but the timings just never worked out,” he tells me, explaining how he had been invited to make his musical theatre debut in a number of productions, including taking over from Bertie Carvel as Miss Trunchbull in Matilda.

“I nearly did My Fair Lady recently. I got so close to it, but there were problems with American Equity and it fell though, so when Doctor Dolittle came along I said yes, definitely YES!”

Part of the 50th anniversary celebrations of the original movie starring the late Rex Harrison, there were other elements that piqued Mark’s particular interest in the project too.

“It was a combination of things really, but using puppets that can dance, sing and move in a completely different way adds a whole other layer that fascinates me. In the film it was real animals and then on stage it was animatronics, but this time around it is completely different.

“It also seemed like the right time to do Dolittle again. I don’t think – with all due respect to other productions – that he’s been done justice to, and I think it’s the right time to talk about taking care of animals. Leslie [Bricusse – book, music and lyrics] was really interested in looking again at a new adaptation and we now have the chance to interact in a much more dramatic way. And that superhero skill of talking to the animals really interested me because it opens up a whole other universe.”

I suggest that perhaps looking for a new universe was author, Hugh Lofting’s inspiration when he wrote the original stories from the fetid trenches of the First World War. Mark nods his agreement.

“Like most people he had an appalling time and witnessed man’s appalling capacity for self-destruction and cruelty. In a way Doctor Dolittle is his antidote to that. It’s not just about the animals; it’s about being kind to each other, which is a really basic thing that children naturally understand but that we seem to forget as adults. We become selfish in oh so many ways. But Doctor Dolittle has a philosophy and he’s on a mission, although sometimes he is misunderstood.”

If you’re new to the tale of the charmingly eccentric Doctor Dolittle, in the musical version his challenge is to track down none other than the Giant Pink Sea Snail, a creature that holds the secret of life and makes the world a happier place. By way of stupendous song, dance, puppetry and pageantry, the underlying message urges us not just to attempt conversation with animals, but to listen and learn from them too.

“We know so very little really. With transmitter technology we have only just found out, for example, what puffins do when they’re not nesting. We have a lot to learn yet.”
But, he promises, there is lots of fun on offer for all the family; from little ones to great-grandparents and everyone in between.

“There are lots of things that kids especially will find hilarious. After all, what’s not funny about a naughty monkey?

“And the great thing is that it is all LIVE! Going to the theatre for the first time for kids is like having only ever watched football on the telly and then going to a match. It happens right in front of you,” he says, stressing that live theatre is a completely different experience to watching, say, a movie.

“This is the real deal and with all the puppetry it will be really exciting,” he adds.
Praise indeed from a man whose career has included some of the highest grossing films of all time and performances at some of our most distinguished theatres. One of our best-loved actors, from leading roles at the Royal Shakespeare Company, the Royal National Theatre and Birmingham Rep, Mark has also been on TV presenting documentary series on both Britain’s Industrial Heritage and Explosives, has hosted two series of the quiz show, The Link, and has written and performed in the hugely popular The Fast Show. Familiar worldwide as GK Chesterton’s Father Brown in the hit BBC TV series of the same name, in movies he has starred in 101 Dalmatians, The Borrowers, Shakespeare In Love and, of course, as the Ministry of Magic’s Head of the Misuse of Muggle Artefacts and proud papa of Ron, Fred, George, Ginny, et al in seven of the eight Harry Potter films. With such a cool and credible CV he has plenty to swank about, but that simply isn’t Mark’s style. Funny, warm and amiable, imagining him as the delightfully dotty Doctor Dolittle doesn’t require any leap of imagination.

As for the prospect of the tour and of life on the road he is upbeat – enthusiastic even.
“I was touring way back and have worked away all my life, so it’s normal to me,” he says with a grin. “Besides, it makes home all the sweeter.”

With no need of local guidebooks, he is also familiar with almost all the towns on the tour schedule.

“I have been to everywhere pretty much, either as an actor or through making documentaries or just visiting for pleasure. I love getting out and about; getting the bus and exploring towns. It’s the best thing about touring.”

The perfect pick-me-up and an absolute tonic, I’d advise booking in with this particular ‘Doctor’ without delay.