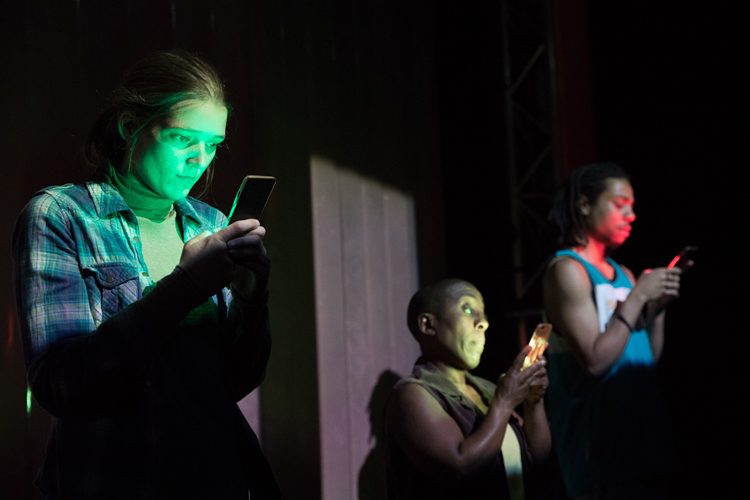 Unimited Theatre’s Artistic Director, Jon Spooner talks to us about his eye-opening new show Future Bodies premiering at Home as part of the Manchester Science Festival, which asks, as we increasingly fuse our brains with technology, at what point do we stop being human, and does it even matter?

Future Bodies is about the fusion of brains and technology. It’s a very interesting and complex concept. Where did the idea come from and what does it mean to you?

My company, Unlimited Theatre specialises in collaborating with scientists and in 2015 I was commissioned by the Science Museum in London to make “an interactive festival of human enhancement and biotechnology”. As a result, I got to meet some of the most brilliant researchers and cyborgs working in advanced prosthetics, smart drugs and brain implants. I’d always been into sci-fi but it was inspirationally eye-opening for me to discover how advanced some of the real, current developments are. It was also startling how little real-world thinking and policy making has been done about the implications of most of the tech being developed. So, this show and You Have Been Upgraded – the other event I’m making for Manchester Science Festival are my contribution to creating a higher quality conversation around the real world (potential) impacts of human enhancement technologies.

How did you approach the research for the show?
It was mostly conversations in offices or pubs with some of the people we met through that initial event. Professor Barbara Sahakian at Cambridge for cognition enhancing drugs; Dr Tim Constandinou at Imperial’s Centre for Biospired Technology on brain implants; Professor Paul Freemont at Imperial’s Centre for Synthetic Biology and Anders Sandberg at the Institute for the Future of Humanity were all extremely generous with their time and introductions to other specialists. We also read most of the internet! If you’re interested, we’ve distilled some of the most interesting/relevant research on a dedicated website https://unfuturebodies.com

What is the most interesting/exciting discovery you made during the research?

The show has been co-created by five of us (myself and Clare from Unlimited Theatre and Abbi, Helen and Becky from RashDash) and I’m sure we’d all have different things that blew our minds – synthetic wombs; panda meat burgers grown from scratch in a lab; brain implants to restore a sense of touch for prosthetic limbs. But the thing we we’re all most equally fascinated with (or troubled by) was the sincere and increasingly mainstream quest to cure ageing, particularly with regard to Whole Brain Emulation – “mind uploading”. Yes, most researchers dismiss this as an impossible fantasy but there are some very serious people who believe it is achievable in the not-too-distant future. If you really want to have your mind blown you should totally check out this 50minute podcast interview with neuroscientist Randal Koene.

What has been the greatest challenge of presenting this scientific research as an artistic piece?

Not just making a lecture! It’s always our biggest challenge to find ways to make these often extremely complex ideas both accessible and relatable. But it’s a good challenge and one that I think we’re increasingly good at.

What can audiences expect from the show?

You can expect to have your mind blown and for your hairs to stand on end; stunning visuals and heartbreaking new writing; outstanding performances from a brilliant cast and magnetic vocals and driving guitar riffs from a blue-skinned alien. If you’re deaf or hard of hearing then you can expect a fully accessible experience as the whole show is captioned.

Has your view of your own brain/body changed through making the show and if so how?

I started making this show excited by the possibility of becoming an internet connected, blue-skinned, 300-year-old, winged demi-god. As a result of the depth of conversation with my collaborators, particularly Abbi and Helen from RashDash, I’ve become surprisingly reinvested in exploring the full potential of the body I was born in. I’d still like wings though.

Will there be any opportunities to see the show again after the Science Festival?

We hope so! It goes on a short tour to Northern Stage in Newcastle and the Lawrence Batley Theatre in Huddersfield – details on our website. We’re hoping it will be back for more performances in 2019. If anyone would like to stay in touch then you can follow us on Twitter @untheatre or Facebook

Future Bodies is a co-production from Home and Unlimited Theatre in collaboration with RashDash and has been developed specifically for Home’s intimate 150-seat Theatre 2 space. It is at Home from 28 September to 13 October 2018.