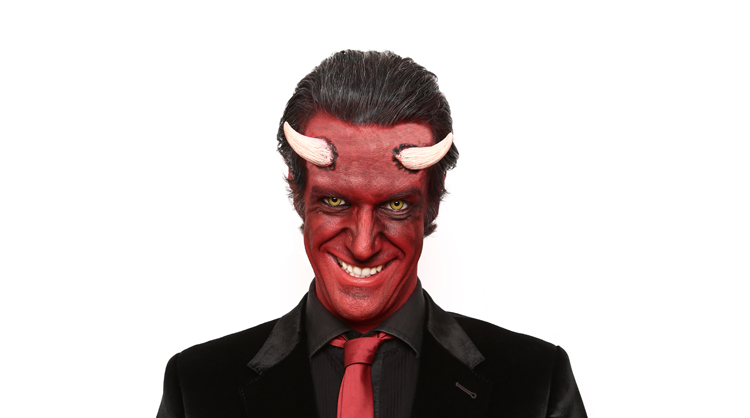 In a social media driven world people are increasingly divided into more and more unpleasant categories of evil – Snowflake, Nazi, Remoaner, Trot, Libtard, Brextremist, Feminazi, Piers Morgan… But is life really that bad? Marcus Brigstocke is taking his new show, Devil May Care on the road to find out. He talks to Brian Donaldson about taking the hot seat as fallen angel, Lucifer in his first character driven stand-up show.

When you hear the name Marcus Brigstocke, chances are you’ll be expecting to hear comedy of a certain flavour. “Audiences who come to see me are used to seeing someone being fairly polemic, angry and frustrated. But in my new show I wanted to do something where I step away from the cliché of me being posh, middle-class and a bit angsty. What if I remove myself from the picture? So, I’m going to be Lucifer.”

All comedians have a little touch of the wicked about them, but with Devil May Care Marcus is taking his imp-like nature and veering off into whole new territory. “This is something I’ve never tried before. It’s effectively a character piece, and like most character stand-up it’s a thin veneer over what I am. It’s simply a means of talking about stuff from a certain point of view. I’m very interested in notions of what’s good and what’s bad. I think there are very few people who do bad things with bad intentions; there are a lot of us who do bad things with good intentions – or at least with blinkers on – and that’s what I’m interested in.”

In order to take his audience along with him, Marcus doesn’t have to just act a bit like Satan: he has to look like him, too. “We’ll see how far into the tour I regret this but I will be wearing full devil make-up and horns for every show. But I need to just remember that, frankly, some people have real jobs. So, I might be like, ‘oh it’s going to be a nightmare, I shall have to put make-up on every night!’ Well, really, wow, how tough.”

Marcus won’t just be donning some horns in Devil May Care, he’ll be locking them with those he views as trying to simplify and polarise political debate in Britain. “What’s interesting for me is the speed with which we put each other into groups, and that’s something which has been accelerated by social media. ‘Right, so you voted for Brexit: that means you’re a bit thick. You’re a Conservative: you’re basically a Nazi. You’re a Corbyn supporter: you’re a dangerous myopic utopian dreamer. You’re a Scottish Nationalist: you’re naïve and blinkered. You’re English: you’re every bullying patriarch that ever existed.’ Social media has amplified that process, and in this show I’ll be dividing everyone up deliberately and in a cartoonish way by saying how everyone is so much worse than everyone else: I’ll show that we’re really not helping each other with this level of discussion.”

One of the most erudite and thoughtful stand-ups in the British game, Marcus Brigstocke has been working away at comedy for over 20 years, starting off at Bristol University and then the Edinburgh Fringe with sketch group Club Seals before moving into solo projects. Through acclaimed live shows such as God Collar, Why The Long Face? and Planet Corduroy, plus TV work including Argumental and I’ve Never Seen Star Wars, his rise has been the product of talent and toil. But when it comes to stand-up, he has a very definite idea of what he believes should be at the core of someone’s act.

“My starting point for a show is not what’s funny, it’s entirely what’s interesting, and my job is then to make it funny. Obviously, come show-time if I’ve failed to make it funny it doesn’t make the edit even if it is interesting. But what’s more important to me is ‘what do I really care about?’ When I saw Jerry Seinfeld live – and he’s someone I obviously admire as a stand-up – I was thinking, ‘mate, just tell me one thing that you care about.’ That’s always been the stand-up that I’ve been drawn to; it doesn’t have to be passionate or ranty but just needs a feeling that someone cares about something.”

While screen work and stand-up have got Marcus Brigstocke to where he is today, one longstanding ambition has also been realised. A natural performer, he’s been keen on making strides in theatre, and some intriguing roles have come his way in the last couple of decades. “I got into comedy in the first place because I love being on stage and performing, and making and creating things. But I always wanted to be cast in things as well as writing my own stuff: there was always an ambition to use other people’s work and have a script.”

Scripts have indeed fallen in his lap and he’s appeared in the likes of Spamalot, Oklahoma! and The Railway Children, while his most recent theatrical part was in taking the title role in Barnum. “It was incredible. I worked out recently that between last November and March I walked over 5km on a tightrope. It was thrilling and for me, it was a dream role. I’d really love to play Professor Higgins in My Fair Lady because, you know, Rex Harrison couldn’t sing either.”

But for now, Marcus Brigstocke is preparing to tap into his dark side and make us laugh as he transforms into the devil incarnate. While parts of his show will no doubt include passionate tirades against the things that get his goat, he will be putting life’s irritations into some kind of perspective.

“I know there are a great number of people struggling and having a terrible time in Britain, but most of us really do have enviable lives. If you have a job and somewhere to live and enough food, then you’re already doing better than more than half the people on the face of the planet. And yet, we get drawn into these social media rows, or we hate something quite mundane, or we get furious that Amazon said they’d deliver on Tuesday, it’s already Wednesday and it’s not here! But I do like to end my shows by talking about what’s great in life and that actually we’re pretty lucky.”