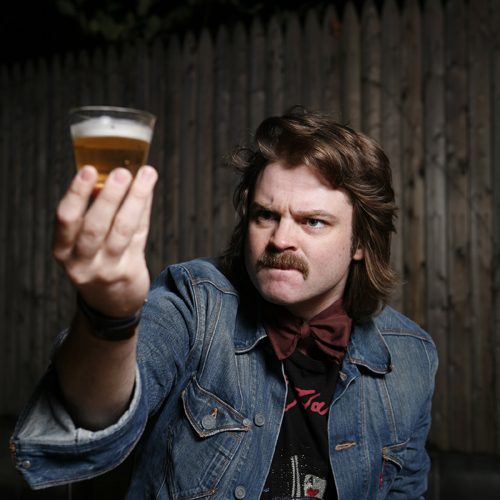 Canadian-born comedian, Glenn Wool is back on the road for the first time after becoming a dad. Delving into his back catalogue of material spanning 25 years, Wool’s Gold II (The Iron Pirate), is the comedy equivalent to a greatest hits album. But does he still agree with his early points of view or has he finally grown up?

Your new show takes inspiration from your back catalogue of material spanning 25 years. How has your comedy changed in that time?

Well it has matured (a little). I’m still partial to a dirty joke which has helped in this time of polarized politics making audiences more difficult to please with anything that doesn’t congratulate them for thinking in a certain way.

Do you still find the same things funny?

Yeah, there’s a through line. I’ve always enjoyed highlighting hypocrisies of the power elite, but with the added ingredient of age and self-awareness I’m now able to include some of my own.

You say you’re performing some of your more subversive routines – how do you decide which ones they are?

To be honest, I had to sit down and listen to all my albums again. Luckily that’s what I do every Tuesday so it wasn’t that much of a hassle (that was a joke, by the way.) It’s actually Wednesday…

Can people request you do their favourite routines?

Anything is possible in a free society but if it’s anything longer than a 30 second stinger, it’s more than likely I can’t remember how it goes anymore.

How do you keep track of all your material, do you write it down?

Not really. I write pieces in notebooks and then try them out on stage. If I remember it then it goes in the act and if I forget then it wasn’t good enough or I would’ve remembered it.

Is there any new material in there?

Nope, that’ll be for the next tour.

‘I write pieces in notebooks and then try them out on stage. If I remember it then it goes in the act and if I forget then it wasn’t good enough or I would’ve remembered it’.

What’s your favourite routine and why?

It’s one called “Big Rick” about a new messiah. I wrote it about 10 years ago. It’s a rant done at top volume for about 10 minutes. It’s beautiful to behold but sadly I’m too old to do it anymore. I brought it back a few years ago and just ended up blowing my voice out. I seriously had to stop and take a little rest every night after I’d done it. Oh to be young and on drugs. It doesn’t help marriages or work ethic but my god it makes the hard bits easier to tell on stage.

You recently became a dad, how has that affected your outlook on life?

I don’t turn down gigs just because I don’t fancy them anymore. If you got the money, I’ve got the time sailor.

How has becoming a dad impacted on your comedy?

Yeah, I’ve been writing a lot of material about it. I don’t think I’d trust a comedian who had a kid and didn’t write about it. It’s such a life event. I don’t see how you couldn’t find a take on it.

How do you find touring with a young family? Do they come with you?

Not on this tour but we’re doing a cross country Canadian tour with all the Oz and New Zealand festivals next year so I’ll probably have twenty years’ worth of material after that (or a twenty year prison sentence but we’ll cross that road when we come to it).

How do you see your comedy developing over the next 25 years?

I’d say there will be a lot of prison jokes and harmonica playing after I finally snap in the middle of that tour next year.

Glenn Wool is performing at Salford’s The Old Pint Pot on 2 February 2019. For tickets and full tour details visit www.glennwool.com