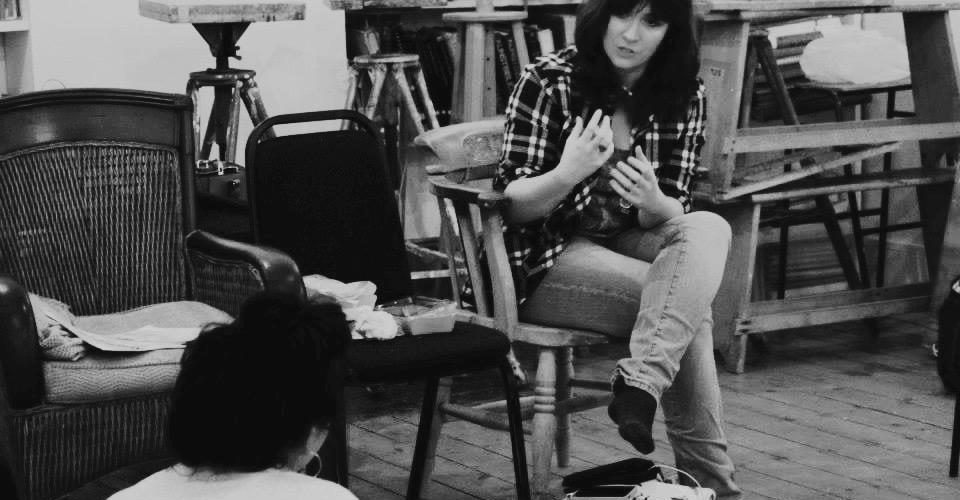 Since winning an Arvon Foundation bursary in 2007 Manchester writer, Gemma Langford has written stories for stage, screen and video games with work including Ghost Town Games’ Overcooked 2 and episodes for BBC’s Dr Who. Last year she was named as a 2020 BAFTA ‘Breakthrough Brit’ and starts the year with a new play Welcome to Shangri-La at Hope Mill Theatre.

What is Welcome to Shangri-La about?

Gemma: “The play is set in a small rundown seaside B & B, where its inhabitants have created a lovely family, of sorts. As they struggle to survive, they long and wish to be normal. To be like everyone else.

“But you should be careful what you wish for.

“Late one night a stranger calls, looking for his missing wife. He brings with him a cash-filled wallet and the promise of a normal life. But this promise comes with a price – the very soul of Shangri-La”.

Where did the inspiration come from to write the piece?

Gemma: “Fitting in has never been a simple thing for me. I’ve always been a bit of weirdo and when I was younger. I so desperately wanted to be ‘normal’. As I grew, I learned to love and embrace who I was, but that word ‘normal’ has continued to stalk me. I wanted to write a piece that makes us look at normal and reassess its meaning…if it exists at all! “

Do you have a definition of ‘normality’?

Gemma: “Hahaha – personally I’d throw that word in the bin! But it’s a good question…an impossible question. I want the audience to take a hard look at that word and what it means to them. To ask themselves, if their definition is really their own, or one that’s been imposed on them. I’m looking forward to the chat in the Hope Mill bar after the show! For me, everyone has their own ‘normal’ that should be respected, and I think that in times such as ours, it’s important to re-evaluate / update that.

“Sadly, in recent years we’ve seen the UK become more and more conservative in what it considers ‘normal’. It feels like we’re going back in time. This is my protest against that”.

What attracts you about dark comedy?

Gemma: “One of the things I love most about humanity is our ability to find laughter in the darkest times. When you’re at your worst and something makes you laugh, it hits a part of your gut that nothing else can reach. It’s a confusing and delicious kind of humour. Addictive. Honest. It’s the kind of comedy which feeds on our insecurities and vulnerabilities and joins us together in something genuine.

“And I’m a little closet goth, so dark is my favourite hue”.

What does it mean to be 2020 BAFTA Breakthrough Brit?

Gemma: “It’s…miraculous. To be recognised by your peers in that way, for doing something you love…there are no words. You associate BAFTA with this level of talent that seems intangible. But to have them reach out a hand and welcome you to the family is just an honour. A total honour”.

Gemma: “I think all genres can learn from each other – it’s something I’m very passionate about. When you’re writing for games, action is king. It’s all about gameplay. What is the player doing? What mechanics are at play? Is this fun? Then when it comes to story, you ask yourself, what can accentuate and compliment that journey for the player. Whereas much of my work in other genres has been led by a question that I want the audience to help me answer. The story grows out of that question. But as I say, these days I try to integrate disciplines from all genres in my work – whatever hat I have on that day. For instance, that physical urgency that you find in games is a wonderful drive to incorporate into theatre writing. And that’s the wonderful thing with working as a three-person team over at Ghost Town Games – it’s collaborative, experimental. We can put everything in the pot!”

Can you see any cross-overs?

Gemma: “Too many to name. I want to stress, there are so many video games out there which have amazing stories to tell – important stories. It’s an exciting time in games narrative and I’m thrilled to be part of that. I can personally attest that games, stage and screen are increasingly meeting together to talk about possible ways of collaborating. At the end of the day, all of us want to take our audience on a physical and mental journey. We want to make them experience new worlds / different lives in whole new ways. And that demands that we learn from each other. Incorporate each other’s experiences as artists. If we do this, and I’m certain we will, the future for stage, screen and games is bright!”

What has it been like to be a woman in the video game industry?

Gemma: “It’s been a learning curve. And not always an easy one if I’m being honest. But Phil Duncan and Oli De-Vine at Ghost Town Games have always had my back and in time I established this incredibly supportive network of strong, intelligent, creative, kick-ass women in games that I can call on. That support’s invaluable when you’re the only woman in a room of contemporaries. And it’s something I hope to carry with me into all the genres I work for. All the women I meet have their stories and it’s vital that we support each other, not see each other as competition. And that goes for all areas that are under-represented. Support and raise”.

Would you like to encourage more women to work in gaming?

What is next for you?

Gemma: “Lots of things I’m not allowed to talk about! But to be vague, I’ve a couple of plays in the pipeline and will be writing another audio drama later in the year. We’re also working on a new game over at Ghost Town Games that’s going to blow your socks off!”

Welcome to Shangri-La written by Gemma Langford and presented by Broken Biscuit Theatre Company is at Hope Mill Theatre, Manchester from 11-20 February 2020. The show is suitable for people aged 14 and above.