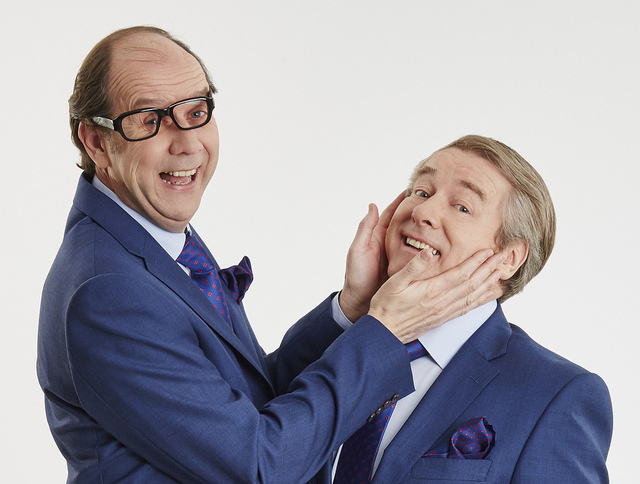 Olivier-nominated duo, Jonty Stephens and Ian Ashpitel bring sunshine to The Lowry with An Evening of Eric and Ern. Quays Life finds out what it takes to re-create the greatest comedy double-act of all time, Morecambe and Wise.

Anyone who watched TV in the 1970s and early 80s will no doubt remember the familiar jingle: ‘Here they are now, Morecambe and Wise’. In an era before TV on demand, whole families would gather to watch their comedy sketch show. And during the 1970s, The Morecambe and Wise Christmas specials drew in audience numbers today’s TV programmers can only dream of, with viewing figures as high as 28 million. Those born later may still be familiar with their comedy through numerous repeats, because almost 35 years after the comedy duo last performed together, the late Eric Morecambe and Ernie Wise are still considered by many to be Britain’s greatest comedy double act.

It is a tough mantle for anyone to take on, but this Christmas at The Lowry, Jonty Stephens and Ian Aspitel invite us to re-live some of Morecambe and Wise’s best comedy moments in An Evening of Eric and Ern at Christmas.

“We were very nervous to begin with, taking on the might of Morecambe and Wise,” Jonty admits. “Eric is my hero and it is a wonderful thrill for me to be allowed to portray him. Sometimes people say tribute, it’s more than that – we like the word homage because it’s a celebration of their work. It’s not a quick five minutes of me going, ‘Waahay,’ and wiggling my glasses, or Ian flashing his hairy legs – it’s more than that”.

Rave reviews and an Olivier Award nomination for the duo’s 2013 play, Eric and Little Ern attest that their act is much more than impersonation. But perhaps the biggest recommendation comes from Eric Morecambe’s family and the late, Eddie Braben who wrote sketches for Morecambe and Wise from the 60s to the 80s, who gave permission for Jonty and Ian to perform many of Morecambe and Wise’s most popular TV sketches as well as some of their lesser known stage sketches.

“When we first launched the play at Edinburgh Fringe Festival we got a message to say Gary Morecambe was coming to see the show,” says Jonty. “We were like ‘oh my goodness it’s Eric son!’, and at the same time we were nervous because we talk all about their relationship and everything in the play.

“Gary met us after the show and just as we were going up to meet him two girls in their 20s came up and said, ‘Can we just say that’s the best show we’ve seen at Edinburgh this year – it’s absolutely brilliant we can’t believe it, it’s hilarious it’s so good’. As they walked off Gary said, ‘Did you pay them to say that?’

“Since then we’ve built up a relationship with the family and now they are involved. We run everything by them basically – all the material we use – they give us their approval and they’ve been so supportive to us”.

The play, Eric and Little Ern was about the lives of Morecambe and Wise, who first met in 1939 aged 13, at theatre impresario, Jack Hylton’s variety show. Two years later in 1941 the pair first performed on stage together at the Liverpool Empire, and their partnership lasted more than 40 years, ending only when in 1984 Eric Morecambe had a massive heart attack on stage and died, aged 58. Ernie Wise died in 1999 aged 73.

Their genuine friendship has been part of the act’s enduring appeal, and Jonty says he hopes his own long-standing friendship with Ian, who he met while they were both at Birmingham School of Speech and Drama, has captured some of the natural warmth of Morecambe and Wise.

“Ian and I have known each other for 30 years. We are literally best mates and I think that’s the secret to it really,” he says, “If there’s a certain magic dust that’s sprinkled over it, it’s our absolute trust in each other and close bond, which Eric and Ern had – you can’t fake that. You could just cast a couple of actors and put them together but I think you would see through that and hopefully what helps us in the portrayal of Eric and Ern is our bond and our friendship because we’re having such a wonderful time doing it, it’s amazing”.

Their new show is a collection of songs and sketches, recreating what it might have been like to watch the popular comedy duo on stage. And, just like the old Morecambe and Wise shows there is a musical guest – singer, Becky Neale.

Before writing their original play Jonty and Ian spent a long time researching their comedy heroes, speaking to people who knew and worked with them both on and off-stage.

“What came out strongly was how loved Eric and Ern were by everybody. There is nothing that’s come out about them in the intervening years to say otherwise – they were genuinely loved,” says Jonty, “They also never took their fame for granted and were always appreciative of their audiences. They were working class men who never lost sight of their roots and always had time for people. Hopefully, when we do the show we’re more than happy afterwards to meet people and have a chat, and I think it’s the right way to be.”

The new show grew out of the second act of the play, with Eric and Ern in front of the curtains, and comes from watching hours and hours of Morecambe and Wise footage. “We’ve included some of the well-known sketches which people will love and recognise, but also there are some maybe not so well-known ones in there, and also some new material we’ve written in the style of Eric and Ern,” Jonty explains.

Another reason for the duo’s timeless appeal is their avoidance of topical sketches, and it is an escape Jonty hopes will appeal to audiences today too. “There’s no Brexit and there’s no Donald Trump,” he laughs “It’s just unmitigated fun and laughter throughout. It’s funny, it’s clean, and like Eric and Ern can be enjoyed by all the family.

“We were never without Eric and Ern at Christmas and hopefully we’ll bring a bit of that to the Lowry.”

An Evening of Eric and Ern is at The Lowry , Salford Quays from 6-12 December 2021. See website for full tour details.

Watch Jonty and Ian as Eric and Ern on The One Show:

Written by Carmel Thomason
Add comment
Tom Sandham brings his Thinking Drinkers: Pub Crawl to the Lowry. And did he mention free drinks?
FacebookTwitterPinterestWhatsApp
Lara Cowin returns safely home to The Stick Man at The Lowry