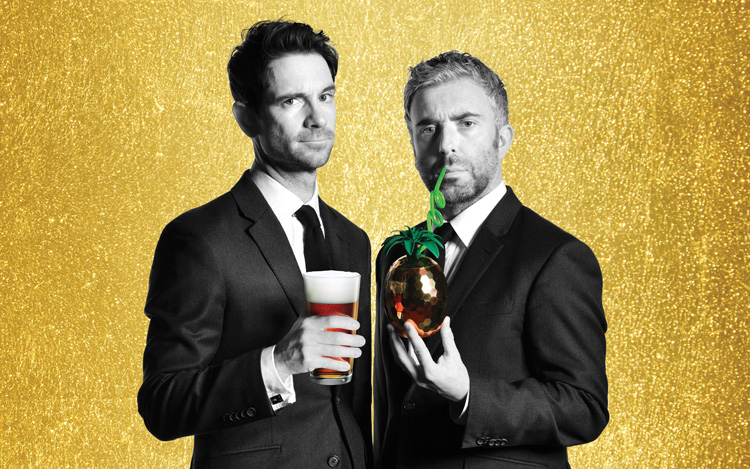 Tom Sandham brings his Thinking Drinkers: Pub Crawl to the Lowry. And did he mention free drinks?

Thinking Drinkers, Tom Sandham and Ben McFarland met in their 20s while working on a pub magazine. Later, on a trip to America they co-wrote the award-winning, Good Beer Guide West Coast USA and have since landed what many would imagine is one of the best gigs in the word – being experts on alcohol.

Now, after travelling the globe to sample the world’s best watering holes, the Thinking Drinkers are touring the UK with a new live show, taking the audience on a bar-hop through history, with drinks included.

We spoke to Tom Sandham to find out what it takes to be a Thinking Drinker:

What does it mean to be a thinking drinker?
To learn a little more about the liquid you’re buying and drinking. If you understand more about provenance you have more respect for what you buy.

What does your motto ‘drink less, drink better’ mean?
It means spend a little more on the alcohol you buy and drink it in a more discerning fashion. Don’t spunk £5 on rubbish gin and skull it in the park. Those days should be long gone.

How did you both end up doing these shows and becoming The Thinking Drinkers?
We were journalists and discovered all the best stories were coming out of the pub, so found ourselves writing about the pubs and drinks in them. As it became harder to make a living out of our journalism, we decided to stand up and combine our award-winning drinks expertise with some jokes, and when we included five free drinks in our shows, it seemed to draw a crowd.

What is your tour, The Thinking Drinkers: Pub Crawl all about?
The Thinking Drinker Pub Crawl is whistle stop tour through the history of great pubs and bars, from Wild West saloon, to Victorian gin palace, beach bar and great British pub. The show is packed with fun facts, great gags weird costumes and five free drinks. Yep, we give every member of the audiences in our show five free drinks.

It’s an experience, we want people to get more out of the night than two men on mics in their underpants. And we will be in underpants at some points of the show.

Why do you give each member of the audience five free drinks?
It’s an experience, we want people to get more out of the night than two men on mics in their underpants. And we will be in underpants at some points of the show.

Do the audience get to choose their drinks and have you ever had problems with drunken audience members?
Nope. We don’t get people drunk. That’s not the point. The measures are modest, the whole idea is to improve liquid lives.

What are your drinks of choice?
We like everything but a beer and a whisky, is the standard. Martini if we’re treating ourselves.

Which do you prefer – pub or bar?
We don’t tend to separate between the two, a good bar should do the same job as a pub and vice versa. It’s simply about combining quality drinks with great service and well behaved, happy patrons.

Do you do a pub crawl of an area when you are there on tour?
If there’s time then, yes of course. We’ll definitely be out in the Northern Quarter, one of the best drinks destinations on the planet.

What is your favourite pub in Salford and why should people visit it?
We don’t know but are happy to hear recommendations, tweet to @thinkingdrinks

When did the first ‘pubs’ appear in history and why has it been important to each civilisation to develop their own versions?
Come to the show and we’ll tell you all about it.

When you’ve been doing your research into pubs and drinking establishments, what interesting things have you discovered has happened in public houses over the years?
Francis Crick discovered the secret of DNA in a pub. The rules of cricket were finessed in a pub. The Americans wrote their first constitution in a pub. The Ancient Greeks came up with the Olympics in a pub… the list goes on.

The Ancient Greeks came up with the Olympics in a pub

With public houses in the UK closing down so often at the moment, what are the causes of that and how can people help save their local public houses?
Too many to mention here, business rates, duty on alcohol, home comforts, social media, scaremongering about alcohol. It’s really tough for pubs with as many as 19 per week closing down across the UK, so the best thing you can do to help is go to them and buy a drink. It’s good for pubs and getting out and talking to people is good for you.

You took this show to The Edinburgh Festival Fringe in the summer, so how did playing to Scottish audiences and everyone who went to the Festival compare to putting on the show at venues across the UK?
The fringe is the largest cultural festival in the world so audiences are pretty diverse there. But really, it’s all the same. Wherever you are everyone likes to laugh and learn something new. A lot of people also enjoy a drink, so the show tends to work wherever we are!

If you could say one thing each to our readers to convince them to come along to see The Thinking Drinkers: Pub Crawl, what would it be?
Tom: You laugh a lot, learn a lot and get five free drinks. What’s not to like?
Ben: yeah, and did you mention the free drinks?

The Thinking Drinkers – Pub Crawl is at The Lowry on Friday 23 November 2018 at 8pm. See full tour details visit www.thinkingdrinkers.com

Tweet @quayslife and @thinkingdrinks to let us know your favourite pub in Salford and why should people visit it.