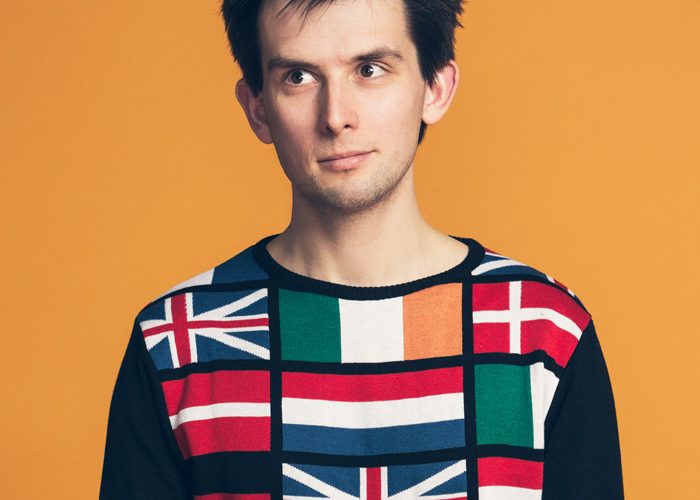 Kieran Hodgson shines a humorous light on the trickiest question of our time: Europe?

After a sell-out run at 2018’s Edinburgh Fringe, Kieran Hodgson is taking his latest show ’75 on the road, which bravely shines a humorous light on the trickiest question of our time: Europe?

Ahead of his gig at The Lowry he talks to Carmel Thomason about politics, his mum and being mistaken for David Tennant.

Q: Your new tour is taking on the most divisive topic of the day, Brexit. Where do you sit in the debate?

Kieran: Much as I like to find a nice, high fence to sit on (the views are tremendous) with most things, I do declare my allegiances on the Brexit issue within the first couple of minutes of the show. Rather surprisingly for a London-based 30-year-old working in the arts I voted Remain, actually. However, the show isn’t really about my own opinion or about trying to make anyone agree with me, it’s more about exploring what underpins this perennial ‘Europe Problem’ in the UK, discovering why it arouses such passions, and seeing how we might try to live with one another a bit better. It’s terribly soppy.

Kieran: Having seen many of my friends needing to rewrite their shows at the last minute in the wake of major political developments, and possessing next to no spontaneity, I chose a quiet life and designed this show to be current-affairs-proof. So instead of Boris gags it’s all about the history of our European membership and most of the story takes place in the 70s, meaning that I can stick doggedly to my script from the beginning of the tour to the end. After all, it’s unlikely that Roy Jenkins will have changed his view on things given that he’s been dead these 16 years.

Q: Is your show just another political rant?

Kieran: If I ever try ranting about anything the first person to get annoyed is me, or rather the voice in my head that says: ‘You’re an idiot! What do you know?’ I live in admiration of people who can see an issue clearly and passionately and express themselves in that way, but the journey I go on in this show is more mellow. It starts off with me falling out with my Mum over the Brexit result and then dealing with it in the only way I know how – running away to a shelf-full of books and trying to get to the bottom of it all. The audience and I find it all out together and I go through many changes of opinion through the show as my knowledge deepens and the History comes to life. Oh yuck, I just said ‘History comes to life.’ Shoot me.

If I ever try ranting about anything the first person to get annoyed is me, or rather the voice in my head that says: ‘You’re an idiot! What do you know?’

Q: Where do you find the humour in Brexit?

Kieran: As comic mines go, the Brexit one is getting pretty exhausted now, I think. It’s not that the issue isn’t still important, rather that it’s been important for so long it has become very hard to find a fresh joke there. My solution was to run as far away from Brexit as I could and instead do something about what I called ‘Br-entry’, turning the story on its head and showing audiences events and characters that they maybe weren’t familiar with, but which were directly comparable to things we hear about every day. I describe myself primarily as a character comedian and storyteller. With the first, the political world on the 70s was one full of larger-than-life characters to imitate, and with the second, there was a fun challenge in trying to tell what might have been quite a dry story in an imaginative way. The day I sat down to make a sketch out of Harold Wilson’s 1975 Dublin Renegotiation Conference was a tough one, I can tell you.

Q: Could your show be enjoyed by voters on either side of the debate?

Kieran: I would really like to think so. I can’t be dishonest and claim neutrality in this issue – I took a position and voted accordingly. But I also try to understand the inherent prejudices and the ridiculous aspects of my ‘tribe’ and to see, as fairly as I can, where the other is coming from. I think I also benefit from the historical aspect of the show when it comes to making it for everyone – over time tempers have cooled about Harold Wilson and Barbara Castle, and so people are freer to unite over funny things about them rather than bristle at their Prices and Incomes Policy.

Q: Do you see your comedy as social commentary?

Kieran: Oh no, that sounds far too grand! I’m just telling a story shaped by my own experiences and a few things I’ve read. I’ll leave that sort of thing to wiser heads than mine. At the end of the day I’d rather make something funny than something trying too hard to be ‘important’. That said, given all my previous answers I’ve just realised I’m a total hypocrite.

Q: Do you get recognised more now you are a regular in BBC2 sitcom Two Doors Down and has that impacted on your life?

Kieran: Someone said hello to me in a hotel in Settle about a year ago but they probably just thought I was David Tennant. That counts, right? Global mega-stardom aside, Two Doors Down has been an amazing thing to be involved in, so I’m crossing my fingers for a fifth series and another barrage of kisses from Cathy. (One for that fans, that.)

Q: Which do you prefer, acting or stand-up?

Kieran: Time to climb back onto that fence! I love them both and each comes with its own joys and curses. With acting, you get to meet new people, be part of a creative team, inhabit exciting and varied roles, get recognised by strangers in North Yorkshire hotels, and get paid a decent wage. And stand-up’s ok, too.

Q: We enjoyed your Channel Four Blap, God’s Own County. Have you got plans for any more Comedy Blaps?

Kieran: I’m so glad you enjoyed it! I think that’s the most fun thing I’ve ever worked on. Three days in my home town tramping about on the moors and putting on silly voices. It was just like being 14 again, only this time with someone filming it. I’d love to make more, but I need to stop being so lazy and get on with writing, so if you’ll excuse me…

Kieran Hodgson is taking ’75 on a national tour from 8 March – 28 May 2019, stopping off at The Lowry, Salford Quays on 16 March. See website for full tour details.

Written by Carmel Thomason
Add comment
Music didn’t cure my cancer, but it definitely helped
FacebookTwitterPinterestWhatsApp
Inside the magical world of In The Night Garden