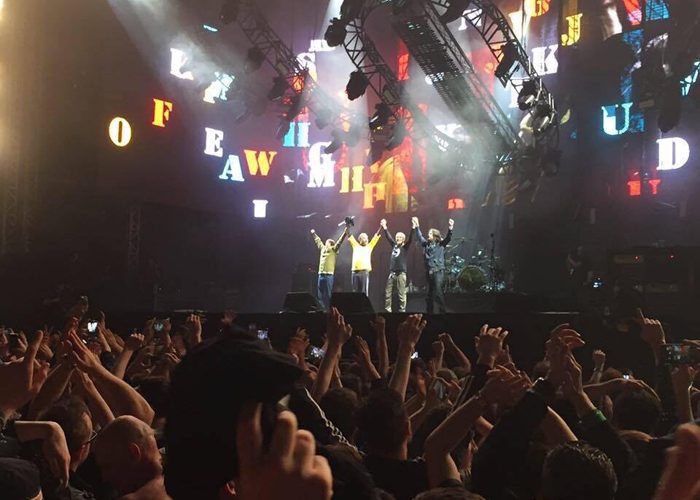 Music didn’t cure my cancer, but it definitely helped

Stone Roses fan Thomas Chadwick tells how the Manchester band’s music became a life-line after he was diagnosed with teenage cancer.

On the snowy morning of the 9 February 2009 I woke up to go to college, later that night I went to sleep in a hospital bed wondering if I’d see the next.

I collapsed that morning with breathing difficulties caused by swollen organs that were crushing my windpipe. After being rushed to hospital it was confirmed I had an aggressive form of cancer. It was life threatening.

That week I was rushed in to hospital on Monday, and had an emergency biopsy and sent straight into intensive care on Tuesday. Wednesday I was transferred to a haematology ward after being diagnosed with acute lymphoblastic leukaemia, which is essentially blood cancer, and on Thursday I was told that I would have to be on chemotherapy for three-and-a-half years. On Friday, I had to go to Manchester’s Christie Hospital to deposit sperm in case I was left permanently infertile by the effects of my treatment.

It’s fair to say that was the most earth-shattering week of my life. Being told that for the next three-and-a-half years, if I was lucky enough to live that long, I’d be on chemotherapy and everything else in my life would have to go on hold. I had to think about things I’d never thought of before, what if I could never be a father?

What happened in that period of time changed me and my life forever.

As I started chemotherapy I found myself lost, lying in a bed thinking about life and death, thinking about people, and thinking about the bleak future. I was a very active teenager before, I had played competitive football since I was four-years-old and participated in many other sports. I loved the outdoors and spent nearly every day I could out in the fields with my friends. Now I was confined to a bed, not even my own. That in itself was torture, which added to the stress of not knowing if I was terminally ill.

Fortunately, after a few rounds of chemotherapy my swellings had shrunk and I was able to stand up and walk. After a few weeks I was even able to leave the ward for a few hours to occupy my mind, as long as I wouldn’t put myself in danger of harmful germs due to my poor immune system.

One day I got into my Dad’s car, it was the first time I’d left the hospital since my diagnosis, and it felt like I was going on holiday. As always in my Dad’s car the CD player flashed on, a song called ‘This Is The One’ chimed from the speakers and something hit me. The song played all through the short journey back to my house. As we drove I was looking at everything I had seen for the past 16 years as a completely different person. For some reason the song seemed to portray my whole life before and who I would become after my illness. I had listened to it before but now it sounded so different, and I sat up and took notice of it. In a way it was a representation of life – when you sit up and take notice it can be so different, from mundane to euphoric, from nothing to something.

I had always liked music but had never immersed myself in it. I knew that ‘This Is The One’ was a song by The Stone Roses. Back in the hospital I lay down with my iPod and played other tracks. Listening to the band’s music became a daily routine. I would listen to the first album several times a day. It was my self-prescription. It was an obsession.

My friends had all gone off to university or got jobs, I was still lying there unsure of my own mortality, music was there to fill the void.

As the months passed I learned to immerse myself in all types of music, each song for a different need. I went through a spell of listening to ‘depressing’ music because that was me, that was how I felt and I wanted something to help me feel that was normal. ‘Street Spirit’ by Radiohead, ‘The Drugs Don’t Work’ by the Verve, ‘How Soon Is Now’ by The Smiths and ‘This Is A Low’ by Blur.

After a year of intense treatment, blood and bone marrow tests showed that the amount of cancer in my blood had decreased. I was still very ill but the chances of me surviving looked good.

The remainder of my treatment dragged on, not a day went by when I didn’t listen to the whole debut album. My appearance changed all the time due to the treatment, but feelings towards those songs remained the same.

Near the end of my treatment I developed avascular necrosis in my left hip, which was caused by the steroids. I had to have my hip replaced which meant I would never be able to play competitive football again. I went in to the operation and lying awake while my hip was being removed I sang, ‘I Am The Resurrection’ over and over in my mind. It seemed to help more than morphine.

On the day of my very last chemotherapy I woke up in the same bed I had woken up in the day I was rushed into hospital. I walked downstairs and saw a note left by my Dad before he went to work. It read: ‘This Is The One’. The previous three-and-half-years flooded my mind, I couldn’t and still can’t comprehend what happened. I had my last oral and intravenous chemotherapy in August 2012, wearing a Stone Roses t-shirt, of course.

Music didn’t cure my cancer but it definitely helped, along with the fantastic support of my family and tremendous work from doctors and nurses. I am now fortunate enough to say that I am cured of leukaemia.

I recently graduated with a degree in Music Journalism and Broadcasting and am now pursuing a career in music.

I remember listening to The Stone Roses’ ‘This is The One’ the first night I spent in my university halls thinking about how times had changed, for the better.

The emotions the song conjures to this day are unexplainable, so much so I decided to get those four words tattooed on my wrist, stencilled from the note left for me by my Dad. I also got to see the song live as part of The Stone Roses comeback tour. Not only did music help me through my worst times, but also my best.

Written by Thomas Chadwick
Add comment
Opera North’s Magic Flute ‘It’s a bit like a mash-up of The Handmaid’s Tale, Black Mirror and Dr Who’
FacebookTwitterPinterestWhatsApp
Kieran Hodgson shines a humorous light on the trickiest question of our time: Europe?