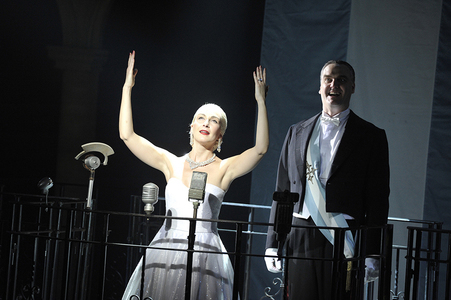 Actress, singer and songwriter, Madalena Alberto is a leading light in musical theatre. As she embarks on a new UK tour of Evita, she talks to Carmel Thomason about returning to her acclaimed role as the controversial, Argentinian first lady, Eva Peron – ‘Cinderella gone wrong’.

How does it feel to be returning to the role of Eva Peron?

I feel very privileged. Roles like this rarely come by, so to have the opportunity to revisit it in a fresh light, with more maturity, is a gift.

Eva Peron was a controversial figure. Why do you think, people are still fascinated by her life?

She is the ultimate riches-to-rags-to-tragedy story, Cinderella gone wrong, and everyone can empathise with that. In reality, there are many opposite accounts about her as a person and about her life, and I wouldn’t be surprise if there was an element of truth in all of them! It’s compelling and we’ll never have the chance to pin her down. The fact that even nowadays in Argentina many are still devoted to her, and Peronism is trying to make a come back, is incredible.

Evita was first staged in 1978. Do you think the interpretation of the role and the way the audience views the character has changed?

Even though it’s exactly the same show, and it is already written from a particular point of view, I think the interpretation will be different in each production and each actress will discover different things. I haven’t seen any other productions so I can’t comment much on it. I also believe that the audiences will be different along the years, and in different countries. The further we are from the social and political events of the time, the less we contextualise where the characters come from. Saying this, it’s becoming easier now as the world seems to be walking backwards, and with the media playing such an important role, not difficult to compare Evita to current powerful women.

What do you think is the enduring appeal of this musical?

I think the majority of people in the world first heard about Eva due to the popularity of the musical, and as far as I know, it was the first role written for women in theatre with such ballsy vocals. Evita was a fascinating woman who burned too quickly and Andrew Lloyd Webber and Tim Rice did an impeccable job and they were so young! Their intricate melodies and clever words tell the story in a concise and compelling way. And let’s not forget the time-proof songs that everyone knows even if they are not musical theatre fans.

Do you have a favourite scene or song?

That would be the hospital scene. It’s just written in such a way that it’s impossible not to get lost in it. It’s where the authors allow Eva and Peron to be at their most vulnerable place, where we see them as mere humans, devoid of all riches and popularity, and where we connect the most with them. It’s very powerful and very pleasurable to play. Especially with a great actor such as Jeremy Secomb by my side!

It’s a very emotional role and must be exhausting. At a time of year when so many people are going down with colds, do you have any secrets for staying well and in good voice?

It’s not easy to keep away from colds unfortunately. I do tend to look after myself, to have enough rest and healthy foods. I don’t stay out after the show and many times I have to be silent during the day so I have enough “gas” for the show. It is very demanding vocal and emotionally and when your commitment is strong, there’s no easy way to go about it.

You’ve been fortunate to play some of the most coveted roles in musical theatre, including Fantine in Les Miserábles (25th Anniversary Tour, The Barbican, 02 Arena), Grizabella in Cats (London Palladium) and the title role in Piaf (Leicester Curve). Are there any roles you haven’t played and would love to?

Yes, I’ve been very fortunate! I’m sure there’s a lot more to play out there. Would love to be involved in new productions of shows, even if they aren’t new writing, where we can explore the characters more. Maybe a new version of Chicago where I’d have a go at Roxy, or a Lucille in Parade? I’d love to keep opening doors in TV and film as well. To be honest, I’ll be very lucky if I can just keep doing what I love.

Evita is at the Palace Theatre, Manchester from 6-9 December 2017 and touring the UK until 2 June 2018. See website for details. For information about Madalena’s singing appearances visit MadalenaAlberto.com

Written by Carmel Thomason
Add comment
Everything is Beautiful for Bronté Barbé
FacebookTwitterPinterestWhatsApp
Debbie Isitt on Turning Nativity! into a Musical