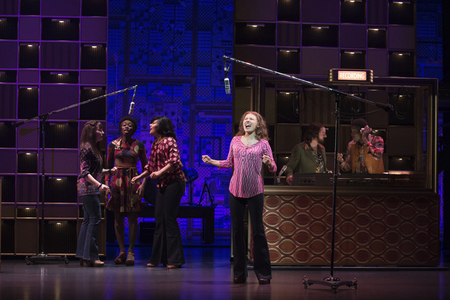 Everything is Beautiful for Bronté Barbé

Beautiful – The Carole King Musical is on its first UK tour and stops at the Palace Theatre, Manchester for the festive season. It’s an unexpected treat for its star, Bronté Barbé who gets to spend both her birthday and Christmas at home in Macclesfield.

Seven years after reaching the finals of BBC talent show, Over the Rainbow, the Mountview Academy graduate has found her pot of gold, with leading roles as diverse as Princess Fiona in Shrek the Musical to now celebrated song-writer, Carole King. She talks to Carmel Thomason about all things Beautiful.

You’re ‘home’ for Christmas this year – how does it feel?

I can’t wait to open in Manchester, I’m very excited. And it’s opening on my birthday. I’ve got quite a lot of family in that night and I think as a cast we’re going birthday bowling.

It’s very important for me to be home this year. I couldn’t believe my luck when I saw we were in Manchester.

It’s usually my mum and my sister and dog. And sometimes my grandma and her dog as well. This year I think my boyfriend will be with us too. We have brunch in the morning, usually smoked salmon and a Buck’s Fizz. I don’t get dressed until 4pm! We watch films, and we have to play games.

It’s now seven years since you took part in Over The Rainbow. What did you learn from the experience?

I think what I took from it is that you just have to work really, really hard. There are no two ways about it. Just to keep on it and keep going and not let things phase you.

It was amazing how upset I got when I was voted out. But I learned not to take things too seriously. We’re playing for a living. It’s a responsibility, especially when you’re playing a real person, but just enjoy it.

How much did you know about Carole King before getting the role in Beautiful – and how did you prepare for the part?

I knew very little. I had Tapestry on vinyl for a few years and loved it. My mum told me to get it and it’s wonderful. The amount of feeling in it. But I didn’t realise until I saw the show how much Carole King had written, all these songs, and how much I knew them. They’re ingrained in you, they’re all just in there.

It was a new thing for me, playing a real person who is still alive. You have to honour that.

Playing a real person is just very different – certainly to playing Princess Fiona! It’s very subtle. I didn’t want to do an impersonation, more an interpretation. I did a mass of research; I had a list as long as my arm. I read her autobiography, and also another book which was really amazing, about people like Carole King and Janis Joplin, which was very raw, whereas the autobiography comes from a different angle.

There’s so much on YouTube too, you could watch her for 24 hours a day and never see the same thing.

What is your favourite moment in the show?

Beautiful, without a shadow of a doubt.  I love Natural Woman and You’ve Got a Friend. But Beautiful is ridiculous. I’ve never felt anything like it, it’s crazy. The words are so amazing and it’s such a gratifying moment. It’s a great song and I can completely relate to it. It’s a great way to end the show.

What will Manchester audiences experience if they come and see the show?

I just hope they’re going to love it. It’s so full of heart and unique in that you know every single song without trying. It’s nostalgic. A woman came up to one of the guys in the cast and said she loved the Locomotion because she remembered dancing to that with her fiancé when she was 18. It’s wonderful to hear the stories. And it ends on such a high. Everyone is on their feet.

Beautiful – The Carole King Musical is at The Palace Theatre, Manchester from Tuesday 12 December 2017 to Saturday 6 January 2018. Visit the website for tickets or call the Box Office on 0844 871 3019. For more details about the show visit BeautifulMusical.co.uk